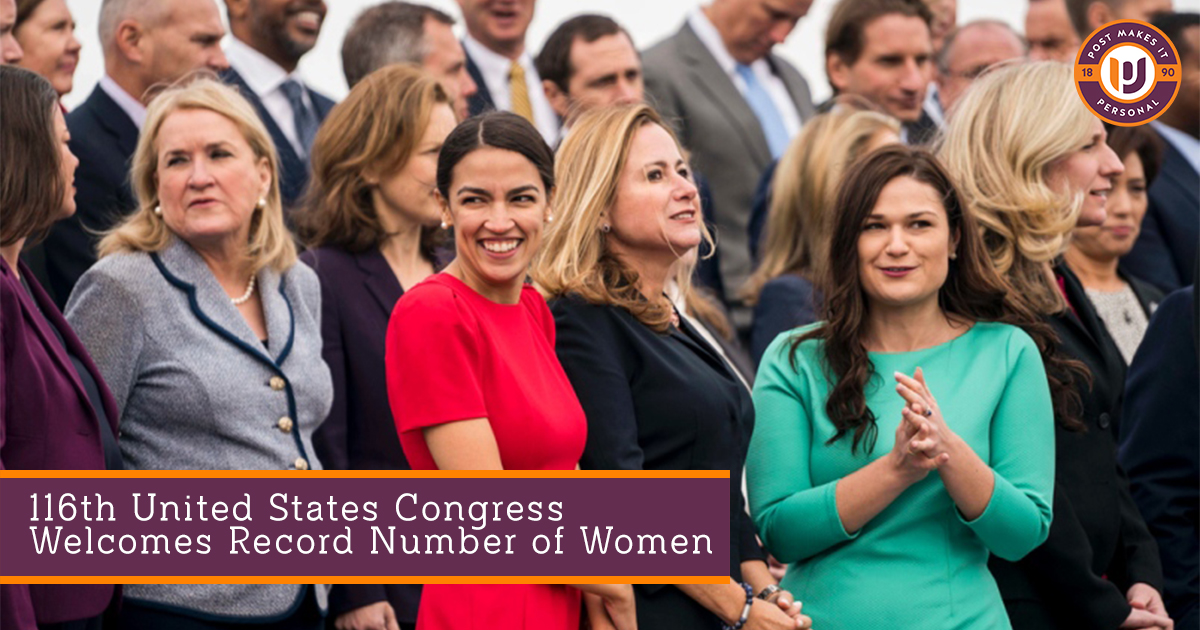 The U.S. House of Representatives gained a record number of women in the 2018 midterm elections. There will be at least 102 women in the House this year — the largest number in U.S. history, reports The New York Times.

The 116th Congress is the most diverse to date. The women who ran this year were black, Hispanic, Native American, and Muslim-American. And 2018 also saw the youngest woman elected to Congress with New York’s Alexandria Ocasio-Cortez’s win.

ABC News reports this group of newly elected, female, progressive Democrats who represent historical firsts has been frequently seen together on the Hill and in social media photos. Here are four of them in a shot Alexandria Ocasio-Cortez posted on Instagram appropriately captioned “Squad.”

This 29-year-old Latina activist from the Bronx became the youngest woman elected to Congress in the 2018 midterms. She defeated Republican Anthony Pappas in the race for New York’s 14th Congressional District. In the June primary, Ocasio-Cortez defeated 10-term congressman Joe Crowley.

In the 2016 primary, she worked as an organizer for Bernie Sanders’ presidential campaign. It was a cross-country car trip after the general election that took her to Flint, Michigan and Standing Rock, North Dakota that served as Ocasio-Cortez’s tipping point. She was inspired to go to work for her own community.

Ocasio-Cortez describes her platform as democratic socialism. She supports Medicare for All, a $15 minimum wage, tuition-free public college, ending the privatization of prisons, and enacting gun-control policies. She calls climate change the “single biggest national security threat” facing the United States and advocates for a transition by 2035 to an electrical grid running on 100 percent renewable-energy production.

This Democrat from New Mexico will be one of the first Native American women to serve in Congress. She won New Mexico’s 1st Congressional District by defeating Republican Janice Arnold Jones.

Haaland is a member of the Laguna Pueblo tribe. This single mother put herself through college and law school. She was a volunteer for President Barack Obama’s 2008 campaign and became the head of New Mexico’s Democratic Party in 2015.

Haaland’s platform included advocating for Medicare for All, subsidizing early childhood care and education, and protecting and expanding an Obama-era immigration policy that allowed people brought to the United States illegally as children to defer deportation.

In an interview with Time, Haaland said: “I’ve had to struggle like a lot of folks. I’m still paying for student loans. I’m a single mom. I know what it’s like to have to put back food at the checkout line because you don’t have enough money and those kinds of things. I think it’s important that we have different perspectives. We need more diversity in Congress,” she said. “I really think that we do need more people who know what it’s like to struggle.”

A Hispanic immigrant from Ecuador and an educator, this Florida Democrat focused her campaign largely on health care. It helped her beat Republican Rep. Carlos Curbelo who had voted to repeal Obamacare in Florida’s 26th congressional district.

Mucarsel-Powell immigrated to the United States as a 14-year-old with her mother and three older sisters. The family shared a oneoom apartment in South Florida, and “her mother worked double shifts as a home health care provider and attended school in the evenings and on the weekends to learn English.”

This first-generation American earned a bachelor’s degree in political science from Pitzer College and a master’s degree in international political economy from Claremont Graduate University. After working for nonprofits such as Zoo Miami Foundation and the Coral Restoration Foundation, Mucarsel-Powell became an associate dean at the FIU Herbert Wertheim College of Medicine at Florida International University.

A former Navy helicopter pilot and federal prosecutor, Democrat Rebecca Michelle “Mikie” Sherrill won in New Jersey’s 11th Congressional District. “She said she was motivated to run for office by what she calls a ‘lack of respect’ for women by the Trump administration and was astounded to see an all-male Senate panel debating whether to repeal the Affordable Care Act last year,” reports The Washington Post.

In 1994, Sherrill graduated from the United States Naval Academy in Annapolis with a BS. She was among the first flight school class of women eligible for combat. In 2003, she received an MSc in economic history from the London School of Economics, and in 2007 she earned a JD from Georgetown University Law Center.

In 2015, Sherrill became an Assistant United States Attorney for the District of New Jersey, leaving that position in 2016.

The first black woman to serve on Boston’s City Council became the first black Congresswoman from Massachusetts and will represent the 7th Congressional District.

Born in Detroit to Palestinian parents, she became one of the first Muslim women in Congress after winning Michigan’s 13th Congressional District.

A refugee who arrived in the United States from Somalia at age 14, Omar became the first Somali-American Muslim in Congress with a seat in Minnesota’s 5th Congressional District.