Making your way after graduation

On July 6, I had the chance to go along with Brittany Calderwood, one of our recent Equine Business Management graduates, to the Equine Clinic at OakenCroft in Selkirk, N.Y., for one of the “Vet/Farrier Presentation And Discussion” events that it holds on a regular basis. Brittany had invited me a few weeks earlier. As her hoof trimming teacher, how could I say no? 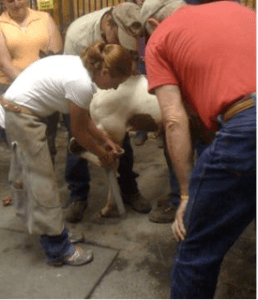 So off we went together, catching up on news since May graduation, to OakenCroft. The clinic itself is placed in a lovely setting worthy of Kentucky — acres of green pastures with mares, foals, and what seemed like miles of wood fencing.

Veterinarians at the clinic were working with a month-old foal that had shown an interesting combination of foreleg contracture and hindleg laxity (these two problems don’t usually occur together), and cow hocks (crooked joints). He had improved considerably in his first few weeks of life, but the cow hocks remained.

A dozen or so area farriers and hoof trimmers were on hand to discuss the case and consider a variety of case management options. It didn’t take much discussion before the group was concurring that the contracture and laxity were both resolving quickly and would likely continue to improve. Digital X-rays taken during the discussion showed more or less normally developing carpal (knee) and tarsal (hock) joints, although the little fellow was clearly less than straight-legged!

Foals have very tiny hooves with a soft horn that wears quickly with exercise, but also deforms quickly when it’s not loaded evenly. This guy’s hooves had begun to show the effects of his rough start, so the decision was made to give him a slight, but very specific, trimming adjustment to put him back on track to grow legs as straight as genetics would permit.

Now, Brittany and I thought we were there just to listen and learn, but the fun part of the evening for me was when my student volunteered to make the trimming corrections that the foal needed! Without a second’s hesitation, she said, “I’ve got my tools,” and she was committed (of course there were at least eight shoeing rigs parked in the driveway).

I was so impressed that this young lady — fresh out of school and ready to start a trimming practice of her own — put her skills on display for this group of experienced practitioners. I did think to snap a few photos on my phone. They aren’t much because of the lighting and the action, but they’re at least something to remember the evening by.

She really did a great job, looking every bit the part with her high-quality tools and a dirty apron, and handled the foal and the job like a seasoned pro. Britt took direction from the guys, following the plan exactly, and making the few tiny corrections to the little feet. Did I mention that even under pretty heavy sedation a month-old colt is a challenge to work on? It was definitely a team effort!

So there you have it. The end of school really is a “commencement.” Brittany Calderwood has commenced her career as a hoof care professional by getting right in the pool with the big fish, and I couldn’t be prouder of her.

For more information on the Hoof Trimming Concentration and the rest of the Equine Program at Post University, visit our website.