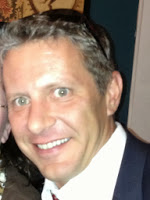 For Terry Lascell, getting ahead has been all about perseverance, multi-tasking and never giving up on one’s dreams.

The online Master of Business Administration degree he received from Post University in June also has made a huge difference in his life, and helped him land a position as a business development associate administrator at a top South Florida hospital.

Terry, 40, of Lighthouse Point, Florida, dreams of one day being the chief executive officer of a major hospital and he is well on his way to achieving that goal.

Terry has been a member of the Post University family for two decades, first as a student and now an Associate Faculty member. Yes, despite his many other commitments, Terry still finds time to teach an online course, Elements of Organization, for the Malcolm Baldrige School of Business

Aside from his career and teaching responsibilities, life has been especially challenging for Terry lately. He recently assumed responsibility for raising his niece and nephew after their mother tragically died. He said he is trying to be the best parent he can be.

As to why he continues to teach despite everything else going on in his life, Terry says he does it because he cares about the students.“If I can teach someone one thing that will change the course of their life in a positive direction then that’s the reward. It’s not the money. I teach them to get them where they need to go,” Terry said.

President of Post University and Founding Dean of the Malcolm Baldrige School of Business Don Mroz said Terry is a perfect example of the type of online student who chooses Post.

“Terry worked hard to get his online MBA degree, juggling work and real-life situations,” Mroz said. “As a university we couldn’t be prouder of Terry’s accomplishments.”

Terry said he “owes so much to the faculty and administration at Post who really supported me.”

Terry began at Post as an undergraduate student in 1994. While pursuing his degree he worked full time in product marketing for Cigna Health Care. At first, Terry enrolled in night classes offered at Post’s regional site locations in Connecticut. He’d take a few classes and then take a couple of years off and go back to school.

After obtaining his undergraduate degree in 2004, Terry immediately started on his MBA degree, which is offered in a fully online format. He also had a new job that required him to commute back and forth to New Jersey several days a week.  The online MBA program appealed to him because of its flexibility.  “A lot of my MBA work was done in coffee shops in New Jersey,” Terry said.

Since Terry began his MBA he has consulted with a foreign holdings company evaluating international business plans in areas such as technology for the blind, international marketing, oil and gas drilling, general aviation logistics, and has even built a wireless telecommunications company.

After moving to Florida and working for a number of years for Benecard Services, he applied for and was offered the position Palm Beach Garden’s Medical Center, which is owned by Tenet Healthcare. Terry states, “Healthcare has always been my passion.”

“Without my MBA I wouldn’t have been considered as a candidate; it was a requirement,” Terry said. “The MBA allowed me to apply real-life experiences to what I was learning.”

As for the advice he gives to any students: Terry reminds them that “Education allows us to alter or change our fundamental ways of thought by applying our learnings to the reality of our situations. When we apply knowledge to real world experiences we broaden our minds to degrees we could never have imagined.  What transpires, evolves or morphs, is self-awareness; having a conscious understanding of the value you bring to the spaces you occupy in every situation or circumstance, both personally and professionally. As a result, when we find we bring lesser value to a situation or circumstance, we easily find ways to do so through our newfound fundamental ways of thought.  This phenomenon is how we move mountains.”