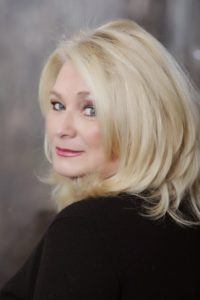 Accountant by day and writer by night, Marian Lanouette is very busy, but she couldn’t be happier about it.

Her day job focuses on managing an accounting department for a Cheshire-based oil company, but her passion is creative writing. Her dreams of becoming an author have already come true as she has published two books and a novella.

“Post helped me achieve my goals in life. The accounting degree helped me rise in my career and the English courses helped make my dreams of writing come true,” Marian said.

She took up writing to explore new and adventurous places as a youth. As a child while her friends traveled on planes for vacation, Marian traveled in books. With an overactive imagination she started creating her own characters and stories.

An avid reader, she discovered mysteries by reading the Daily News as a youngster. Intrigued by the real life crimes, and how the police worked and eventually solved them, Marian’s imagination came alive.

This week, Marian’s “If I Fail, A Jake Carrington Mystery” was released in paperback after being initially released in e-book format last September and making it to Amazon’s top 200 listing. The town she writes about is fictitious (Wilkesbury, CT) but she uses some scenery and landmarks of Waterbury.

Since Marian moved here in the ‘70s she said she found the history of Waterbury fascinating and wanted to incorporate it into her books.

Marian said being a writer takes a thick skin and a lot of perseverance. For two years she tried to get her books published but all she received were rejection letters.

In the beginning the rejection letters gave no constructive feedback, just a form letter saying the publishing house wasn’t interested. Over time it got better and Marian began to receive feedback from agents/editors explaining what she could do better.

“All said they loved the story, but it needed work. I call those kinds of rejections, ‘Positive Rejections’. If you listen and follow the advice, the next time, someone might look a little closer at your book,” Marian said. “Post University taught me to keep an open mind to learning. It’s with that skill I was able to absorb what I needed to know to succeed in the publishing field.”

Post University also taught her a lot about time management, which are essential skills in her very busy life. She works three 10-hour days at her job and on the other four days she writes, markets herself, presents at libraries across New England, conducts book signings, and teaches seminars.

“All I can say about time management is I learned the skills at Post while attending school full-time and working full-time. I love the accelerated program,” Marian said. “I learned how to get a lot accomplished in a short period of time.”

Both of her published books are murder mysteries:

“If I Fail, A Jake Carrington Mystery:”

Murder, sex, stalking, just a normal day for Lieutenant Jake Carrington, that is, until he becomes the one being stalked.

Is the local crematory legit-or a disposal center for the mob? Jake’s investigation leads to his current girlfriend Kyra Russell.

Marian has many books planned. “Mated for Life” will be out sometime in 2014.