My Post Experience: Tim Farrell, going inside the NFL

Millions of Americans will turn on their televisions this fall and watch NFL football. Very few of those people though, will ever get the behind the scenes look inside the NFL that recent Post University graduate Tim Farrell has had for the majority of 2014. 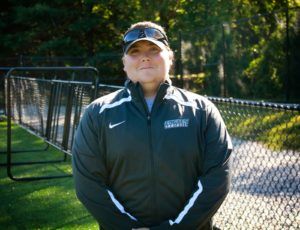 Farrell spent the spring semester and summer working with the Kansas City Chiefs. After completing a successful internship with the organization, the Thomaston, Conn. native was asked to return to Missouri and take on a part-time Marketing Assistant role with the team during their summer training camp.

“Plain and simple, having the Kansas City Chiefs on your resume when you’re looking for a job in the sports industry is huge,” Farrell said. “The experiences I’ve had and the contacts I’ve built have been amazing.”

Farrell graduated from Post in May with a B.S in Sport Management, but was unable to walk at graduation because his internship duties with the Chiefs were still ongoing.

“It stung a little bit to not be at graduation, but coming home and being able to hold that diploma in my hands was extremely powerful,” he said. “The classes and the faculty pushed me to a whole other level. A lot of time and a lot of effort went into that, and to walk away with a Post diploma and a sport management degree is incredible.”

The recent graduate is now sending out applications and looking for full-time jobs in the field of professional sports. He hopes to lean on his experience with the Chiefs, and the skillset he gained in Post’s Sport Management program, when searching for prospective employers.

“The most important thing I gained at Post was critical thinking skills,” said Farrell. “The projects we were assigned forced us to put all of the parts of a plan together, to think outside the box and problem solve. It was those real-world skills that I learned at Post that helped me succeed every single day with the Chiefs.”

Though he’s earned his degree, Farrell hasn’t left Post University, returning this year as the Linebackers Coach for the university’s sprint football team. After working his way up from Equipment Manager in 2012, to an assistant in 2013, to a member of the coaching staff this year, Farrell has developed a growing passion for an additional line of work.

“Having been around the team the past three years, and working my way up the way I have, it’s really given me the itch to pursue coaching,” he said.

“Coming in fresh like I am, it’s an uphill battle, but I feel like I’m getting a very good foundation here at Post with this team.”