2018 Post Graduate Peter Linn: The Value of a Master’s Degree Across Multiple Professions 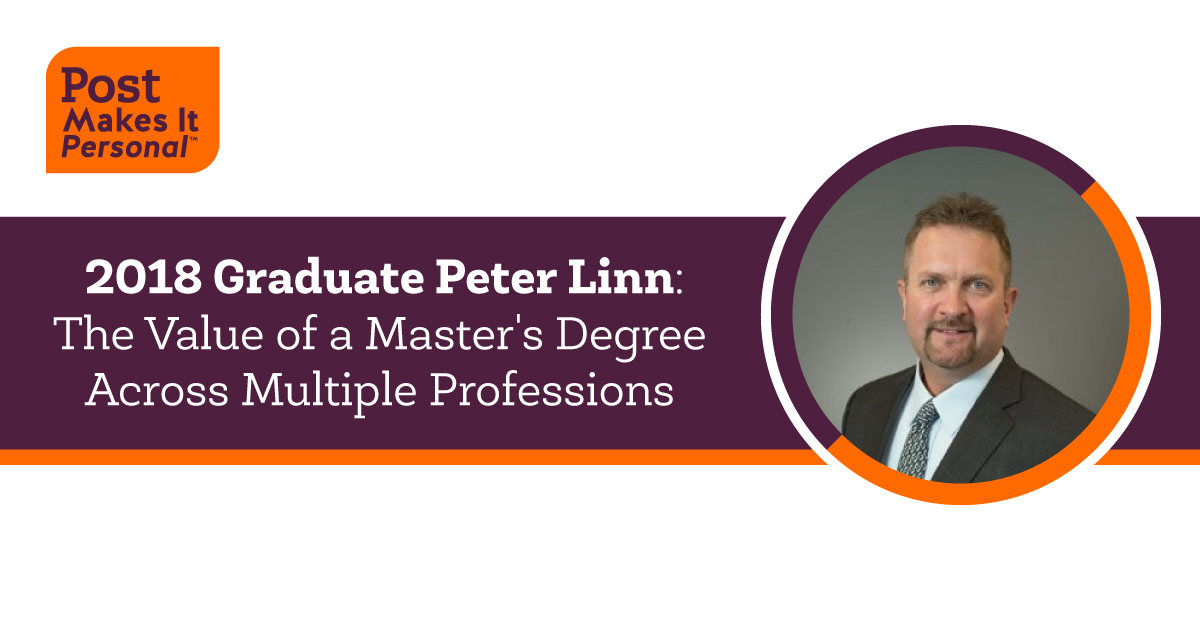 Sometimes, a graduate degree can take you unexpected places. And sometimes, the skills you gain within one field can make all the difference in another. Nowhere is that more evident than in 2018 Post University graduate Peter Linn’s journey.

Boasting an impressive track record in the insurance sector, Peter decided to take a completely new direction at Post by enrolling in the university’s Master of Education program. Read on to learn how he has since applied his graduate education to his insurance career — and to discover where he intends to take his unique skill set next.

A Master of Education might seem like an odd degree for an insurance brokerage’s managing director, but Peter’s approach was, in fact, highly strategic. When he initially enrolled, he hoped that he’d gain new insight into effective leadership.

Since graduating, Peter has drawn on his education repeatedly. Today, he better understands what sparks learning for different types of people. This helps him train employees more effectively — a key aspect of his current job.

Down the road, Peter hopes to use his degree in a more conventional manner: He would love to try his hand at teaching after he retires from the business world. His Master of Education will one day grant him a valuable head start as he shifts from one rewarding career to the next.

It’s no secret that grad school is a huge commitment; this is doubly true for somebody in a demanding career. Hence, Peter was determined to enroll in a program that granted him as much flexibility as possible. To succeed in both his professional and academic endeavors, he needed to peruse course material at his own pace.

Peter is thankful that the Post Master of Education program “allowed [him] the flexibility to spend as much or as little time as [he] wanted to during any given week.” Despite an intense business schedule involving multi-week overseas trips, he was able to stay on track. Often, this meant completing classwork well in advance.

Accessibility was also critical for Peter, who continued to make progress towards his degree while overseas. He studied on the airplane, at the beach and in virtually any other setting imaginable.

While Peter prioritized flexible scheduling and ease of access, he realized that these qualities would be a moot point if the institution he attended lacked a quality reputation. He wanted his degree to matter.

Recognizing that the long-term value of his degree would depend largely on his university of choice, he put a lot of thought into this academic path. In addition to scouring several university websites, he chatted about his options with his wife. An experienced teacher, she offered excellent insight into this important decision.

The Perks of an Online Education

While Peter always knew he needed the flexible scheduling that only an online education could provide, he had no idea what to expect as he began his journey with Post. It took a bit for him to adjust to the process of logging in, finding assignments and chatting with professors. Once he got into the groove, however, he realized that he could actually retain more information via online learning than in traditional lectures.

Although much of his learning was self-directed, Peter interacted regularly with both professors and fellow students. He especially appreciated group projects. Through conference calls and other interactions, he found valuable insight from the many students who already worked in education.

While enrolled in the Master of Education program, Peter gained a better sense of the many ways in which education has changed over the years. His main takeaway: Today, teachers strive to personalize their instruction to better reach different types of students. He explains, “The way we get information, the way we transmit information and help students cognitively grow is so different today than it was even fifteen, twenty years ago.”

Peter is clearly of the belief that nobody is ever completely finished learning. Having already succeeded at the graduate level, he’s about to take what some might regard a step backward: pursuing another undergraduate degree. In reality, however, this additional credential will represent a key step towards his future teaching career. Because he eventually wants to teach math, he would like to secure his Bachelor of Science in Applied Mathematics. Once again, he hopes to benefit from Post’s flexibility and credibility.

Peter’s academic and professional journey is a testament to the benefits a quality education can provide across a variety of career fields. We’re thrilled to see him excelling in his current career and can’t wait to see what he’ll accomplish when he eventually enters the field of education.