Making the Most of the GI Bill As a College Student 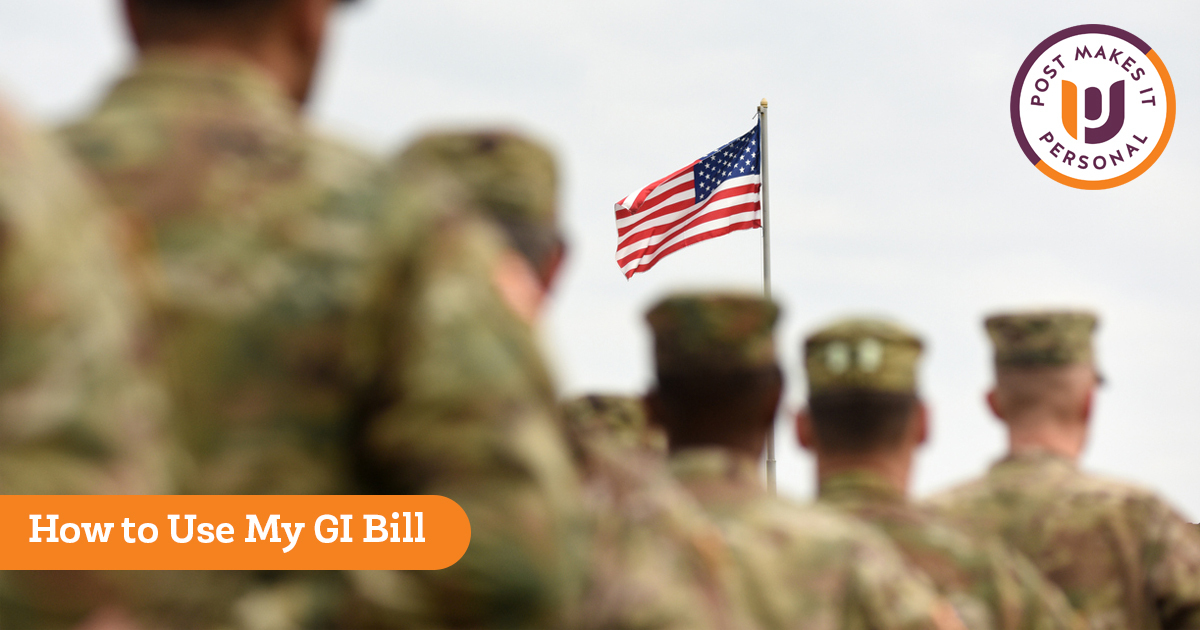 The GI Bill holds a long and esteemed history in the United States. Initially designed to help World War II veterans return to civilian life, the bill spurred a new era of post-secondary academic achievement. Since then, the bill has evolved considerably, while still maintaining its original focus: a successful transition to civilian life aided by education and training. Many eligible individuals, however, have no idea the extent to which the GI Bill could help them gain valuable academic credentials and get an edge in their post-service professional aspirations.

At Post University, we did some research to help our veterans, service personnel and military families gain some clarity on how to make the most of this valuable opportunity. Read on.

Public perception suggests that the GI Bill is a single entity, capable of providing any military member or veteran easy access to a quality education. In reality, however, it consists of multiple benefits programs, each targeted at a decidedly different group of individuals. These programs are primarily governed by the Department of Veterans Affairs, but administered differently based on a variety of factors. Not sure if you qualify? Keep the following eligibility standards in mind:

If you served at least 90 days of active duty after September 10, 2001, you likely qualify for the Post-9/11 GI Bill. Program participants can receive up to 36 months of benefits, although a 15-year limitation on the use of these benefits is imposed for those released from active duty prior to January 1, 2013.

Outside of eligibility dates, the main Post-9/11 GI Bill component worth noting is the Yellow Ribbon Program, which is typically unavailable with other GI Bill programs. The Yellow Ribbon Program provides extensive tuition coverage, including up to $24,476.79 per academic year for private schools as of 2019.

At Post University, we’re proud not only to participate in the Yellow Ribbon Program, but also to be listed in the Defense Activity for Nontraditional Education Support (DANTES) catalog.

Download your Military Service Member’s Guide to learn everything you need to
know about earning a college degree online.

Available to those enlisted in the U.S. Armed Forces, the Montgomery GI Bill is divided into separate categories for active duty (AD) members and reservists.

Under the AD version of the bill, eligible veterans and service members should hold at least two years of active duty. Those deemed eligible for the program can receive up to 36 months of education benefits. Unfortunately, eligibility can prove confusing, as this program involves multiple categories:

Under the Reserve and Guard Montgomery GI Bill, some members of the Selected Reserve can receive up to 36 months of educational benefits. To qualify, reservists must have made a six-year commitment after June 30, 1985. For an officer, this would include six years beyond the original commitment. Educational benefits cannot be awarded until applicants have fulfilled the initial active duty for training (IADT) and met high school diplomas or equivalency requirements.

The Montgomery Bill once also included the Reserve Educational Assistance Program (REAP), which offered educational assistance to reserve members who were called to active duty in times of war or national emergency. The National Defense Authorization Act of 2016 officially ended REAP, as the program was largely replaced by the Post-9/11 GI Bill’s educational benefits.

Some service members looking to increase their educational benefits can participate in a buy-up program, which may deliver up to $5,400 in additional benefits in exchange for a $600 contribution. However, this contribution must be made while the service member in question is on active duty. Buy-up contributions are only available for the Montgomery GI Bill and REAP. Applicants must have joined the military after June 30, 1985.

Sometimes referred to as Navy, Army or Marine Corps College Funds, the GI Bill Kicker provides additional educational benefits in exchange for enlisting or re-enlisting in critical military units. This incentive can be used alongside other GI Bill programs to achieve impressive coverage of academic expenses. The program is handled by the Department of Defense, which determines who is eligible and how much each recipient will receive.

How Can Your GI Bill Benefits Be Applied to Your Education?

Once you’ve navigated the complications of GI Bill eligibility, you can apply your benefits to a variety of academic endeavors. Many students enjoy extensive—or even full—coverage of college tuition and fees, along with significant allowances for books and other essential supplies.

Another exciting element of the GI Bill is housing coverage under the Monthly Housing Allowance (MHA) program. If you attend classes in person in the United States, your coverage will largely depend on your college’s ZIP code. A separate allowance rate is provided for those involved exclusively in online training.

Other common GI Bill provisions include:

Unused benefits from the Post-9/11 GI Bill can often be transferred to spouses and dependents. Your ability to transfer benefits largely rests on your previous service of at least ten years (or your willingness to serve an additional four years if you’ve already served six). Ultimately, however, transfer eligibility is determined by the Department of Defense.

The GI Bill provides an outstanding opportunity to obtain post-secondary training at a minimal cost. By taking full advantage of this spectrum of VA and DoD programs, you can position yourself for success in the quickly evolving civilian workforce.

Are you ready to put the GI Bill to work for you? Contact Post University today and let’s start talking about how you can make the most of your well-earned educational benefits with a degree program from an accredited, military-friendly university.