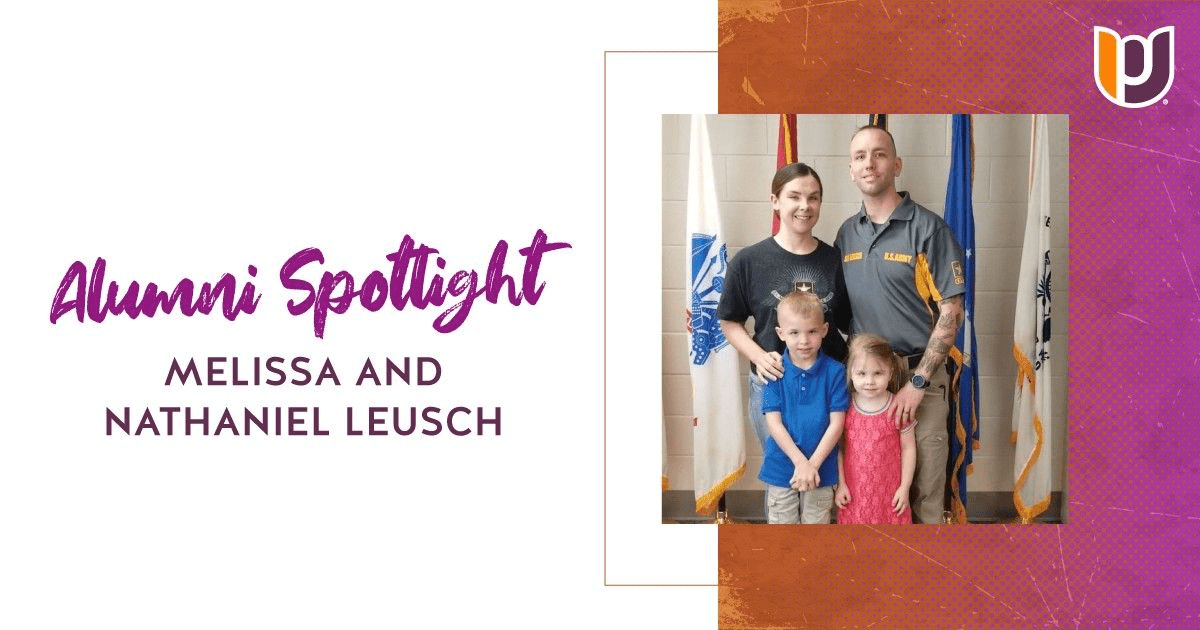 Nathaniel (Nate) and Melissa Leusch each graduated with their bachelor’s degrees from Post University in 2019. Nate received his degree in criminal justice, and Melissa received her degree in computer information systems. Their educational journey may not have started at the same time, but through motivating and encouraging each other, they earned their degrees together.

After graduating high school in 2005, Nate attempted to balance a full-time job while taking classes on a college campus. As one who was not educationally driven at the time, Nate decided school was not destined for him. He chose to join the Army in 2009 as a military police officer. Beginning in 2012, Nate was a K9 handler for three years before becoming a recruiter in 2015. It didn’t take long before Nate excelled, becoming the top producing recruiter in the station. He was soon asked by his station commander, Sergeant First Class Berger, to take a leadership position as the Deputy Station Commander.

“First Sergeant Berger has been my greatest mentor,” said Nate. “He had confidence in me and my ability to advance in the military. However; to keep progressing in my career, I needed to start working towards earning my bachelor’s degree.”

In 2016, Nate committed to Post University since that is where most of his co-workers were attending. In addition to hearing positive feedback on their experiences, Post stood out to Nate, because it was the one school that had a military admissions representative physically come to their annual training conferences to discuss degree options and benefits for those affiliated with the military.

“They made it personal for me before I even applied and committed,” said Nate. “It became an obvious choice to attend Post.”

Once Nate was acclimated to balancing out his army schedule with his course work, he realized he was able to do well in school given the right mindset. He was also impressed with the level in which his professors provided one-on-one assistance when he needed the help.

“I sometimes have difficulty articulating my thoughts and writing them down on paper. I had a professor who went out of his way, allowing me to verbally answer some of the questions when I was struggling. It made me feel more confident in my ability to do well in school.”

While Nate was about half-way through completing his degree, his wife, Melissa, was contemplating going back to school. Melissa and Nate grew up in the same area; they met their senior year of high school and started dating at the age of 21. While the relationship did not work for them at the time, they connected again years later.

“He proposed to me within weeks of reconnecting,” said Melissa, and before she could finish the story, Nate interjected – “I wasn’t going to lose her this time.”

Since Nate was in the Army, they were legally married in November 2011 and had their wedding with family and friends in March 2012. They have two children – a seven-year old boy and a five-year old girl.

After years of staying home to take care of her children, Melissa wanted to start a career in computer technology. Having such a positive experience at Post, Nate encouraged Melissa to apply. While she was initially unsure of the route she was going to take, she knew earning her degree was the first step. Melissa had previously earned her associate degree in 2007. She transferred her credits to Post and began pursuing her bachelor’s in 2017.

While she was working on her degree at Post, Melissa secured an internship as a web developer, allowing her to further develop her tech skills. During this time, Nate presented the idea of working a tech job in the Army.  Last fall, Melissa joined the Army.  She recently graduated from Basic Training.

“I thought it was a great idea,” said Melissa. “After serving ten years, I would be able to provide my children with a GI Bill to help them through school, while still being able to do something I enjoy.”

Melissa, who is currently working with computers in Advanced Individual Training (AIT) for MOS 17C, Cyber Operations Specialist and plans to make Sergeant within the next year. Nate, who became Station Commander in 2018, plans to return to Post to earn his master’s degree in project management so that he can advance to Master Sergeant.

“Post was the first school where I felt confident in my ability to succeed. I knew that upon deciding to go back to school for my master’s, I wanted to continue at Post,” said Nate.