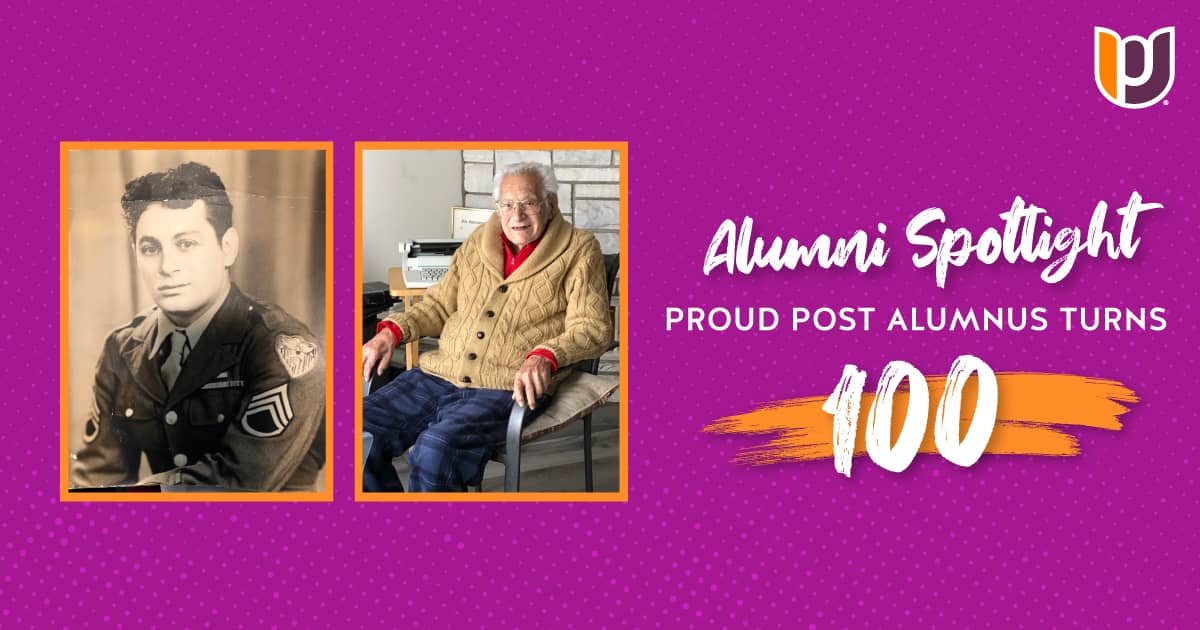 “I owe everything I have to Post,” proudly declares Barbino. Barbino earned his degree in accounting from Post College, which was a two-year institution at the time. He continues to relish in his appreciation for the education he received, the inspiring and insightful instructors who had taught him, and the successful journey in his career that had become possible because of his education.

Barbino’s parents were Italian immigrants who built a life for Frank and his four siblings in Waterbury, CT. Barbino excelled in school, graduating high honors at Crosby High School. Despite his desire to pursue a college education, his family did not have the funds to support him. Therefore, upon graduating high school, Barbino immediately joined the working class. He was crafting cuckoo clock boxes at Lux Clock with his older brother prior to landing a wartime job making bombshells in a local factory.

Barbino was drafted during World War II, serving from 1942-1945 for the U.S. Army Air Corps. Shortly after his return to Connecticut, he was awarded a free education as a U.S. Veteran. Elated to finally pursue his college education, Barbino attended Post (College). Not only did he graduate once again as an honors student, but he also had difficulty landing a job due to being “overqualified”.

Barbino had taken placement tests, demonstrating that his intelligence was far beyond the requirements for the job positions available. He was finally given a job at the Anaconda Metal Hose, specifically being asked to accept the pay and to not ask for a promotion.

But without needing to ask, a promotion did come. Then another. And another…“Because of my education at Post,” repeated Barbino. “Post taught me to go out and do my job and to do it right.”

Well, Barbino did exactly that. He kept perfect records for two years before he was offered a job “upstairs.” From there, Barbino continued to advance in managerial positions within the sales department.

“It was not long before I became a lead man,” said Barbino, once again ending his proclamation with “…because of Post.”

Barbino developed an interest in politics, serving on the Board of Alderman for four years. He was very active in New Opportunities for Waterbury Inc. (NOW), which focuses on the building of relationships to end poverty and was instrumental in the agency’s relocation to its current headquarters on North Elm Street in Waterbury.

“My father worked really hard to help those in need,” said his daughter Marianne Dubuque, an attorney for Carmody Torrance Sandak & Hennessey LLP. “It’s why he worked diligently on the NOW Board and was always so involved in the community.”

Barbino shares that not only does he owe his career successes to Post, but that it was also during his educational pursuit when he met his wife, Trudy. They had five children and shared sixty-two long years together.

“I was able to give her the best of everything – because of my education at Post,” he said.

This endearing man, 100-years young, understands the true value of education. He spoke with such praise and warmth about his journey both during and after Post, never failing to credit his accomplishments to his education and the instructors at the institution. In addition to retaining valuable accounting and mathematics skills, Barbino also ascribes his ability to write poetry to his professors at Post– so much so that he wrote the following excerpt in one of his recent poems:

And to know all this you must have money,

And what it is to me is funny

There I’d say I got the most

The professors were the best

Saw and corrected every test

Kept track of what you learned

Knew it would control what you earned

That’s what just happened to me

To write about my family tree

There I became very dedicated

Very happy to be educated

Being the only one of five children to receive an education, Barbino is beyond blessed to have had the opportunity to attend college and be able to declare himself a Post alumnus—and not just any Post alumnus, but the oldest known to date.