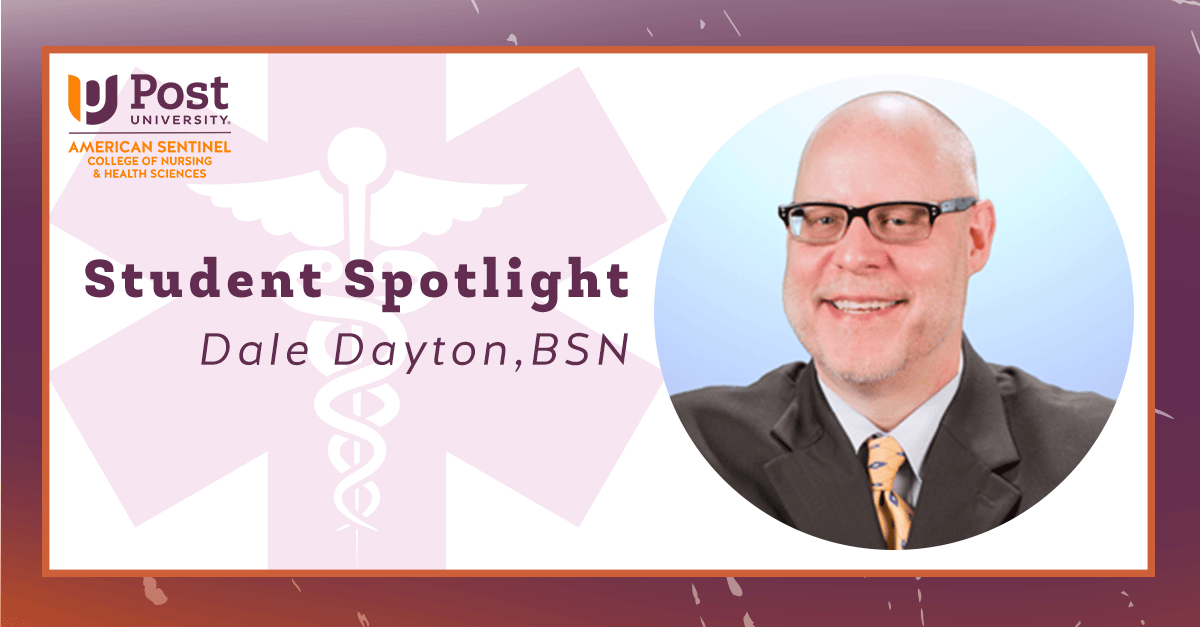 When Dale Dayton went to nursing school, it was during a time when the common pathway was an associate degree. After graduating with an ADN, Dale—who grew up in Ohio—started working in Cincinnati, Ohio, as an emergency room nurse. Over the next several years, he worked his way up to become assistant director of the emergency room. In the early 1990s, he got involved in the hospital’s clinical research studies of patients who had had strokes and heart attacks. That changed the course of his career forever.

Dale became a research nurse when the AIDS epidemic was sweeping the country—and medical professionals were beginning to develop drugs to treat HIV positive patients. He worked for the University of Cincinnati as a researcher, functioning as a study coordinator for a series of AIDS Clinical Trials Group studies sponsored by the National Institutes of Health. Eventually, he was asked to join a clinical research organization involved in the trials and became a clinical research associate.

“I was no longer in patient care at this point, but still helping people, and I really enjoy that,” says Dale, who spent the 2000s working with private clinical research firms, biotech and pharmaceutical companies in many therapeutic areas, including infectious diseases. Along the way, Dale also received a Bachelor of Science in liberal studies.

In 2014, Dale joined the Children’s Hospital Los Angeles as a researcher. His role transitioned to the University of California Los Angeles in 2016, where he got involved with 90 international laboratories sponsored by the National Institutes of Health and conducted lab quality oversight, both for adult and pediatric protocols.

Although Dale’s career had continued to progress over three decades with increasing levels of responsibility, when the COVID-19 pandemic hit, he was ready for a new challenge. “I feel that there was really no better time for me to start working on that BSN, which was something I’d been thinking of doing for years but had never been able to do,” he says. He began his research into online programs that would allow him to achieve the goal as quickly as possible. That’s what led him to American Sentinel College of Nursing and Health Sciences at Post University.

In May 2020, Dale began the BSN Powered by SIMPath program at American Sentinel. “I really liked the idea of going at my own pace and was very intrigued by the idea of learning in the simulation environment,” he says. Dale recently retired from UCLA and is now working as an independent research consultant for pharmaceutical companies and other clinical research organizations. “Flexibility for me was essential. I needed to be able to work on school from anywhere I travel for work. American Sentinel has offered that to me.”

A Possible Return to the Bedside One Day

Dale is aiming to complete the BSN at American Sentinel in early 2022. He’ll continue consulting as a clinical researcher but says that one day, he’d like to work in developing countries as a volunteer nurse.

The BSN investment is a great one, he adds. “The biggest reason I decided to do this is simply that I want to—it’s been on my to-do list for a long time, and feels very satisfying to be close to the finish line,” Dale says. “I know that this is a worthwhile pursuit.”