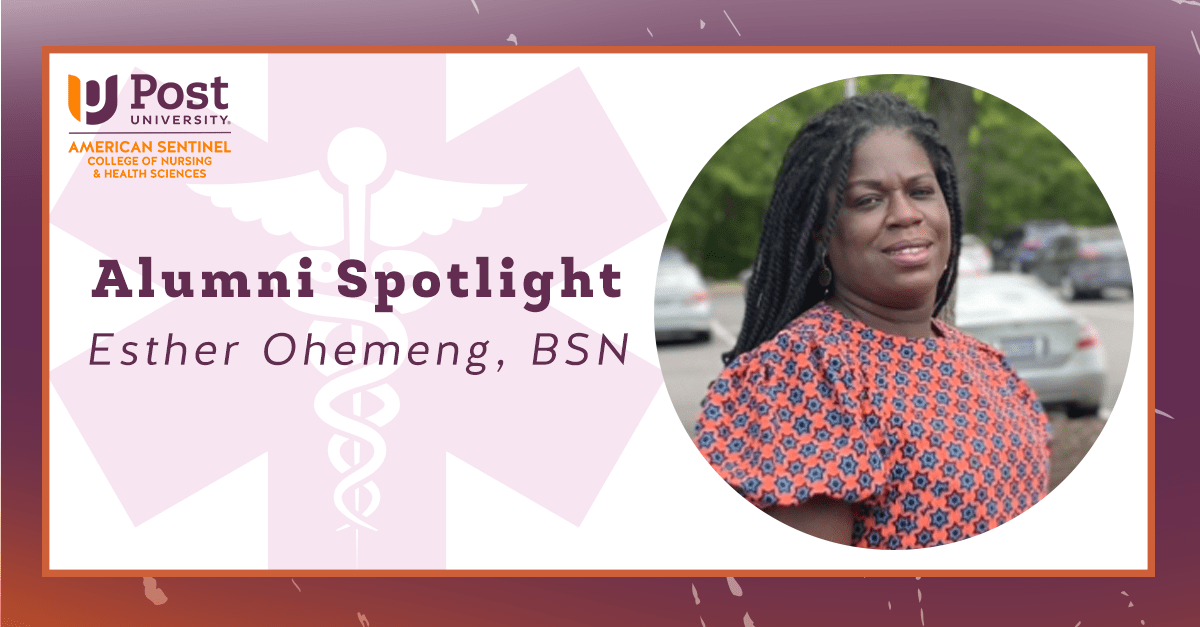 When Esther Ohemeng moved to the United States from Ghana, Africa, in 2006, she knew she wanted to work in the healthcare sector in some capacity. “I like taking care of people,” says Esther. After acclimating to her new environment in Virginia, Esther started taking classes at Northern Virginia Community College. She became a Certified Nurse Assistant in 2010.

Inspired By Work and Her Daughter

After a couple of years as a CNA, Esther became a personal assistant for a woman who had experienced a traumatic brain injury. Around the same time, her daughter was experiencing neurological problems. “I became very interested in the human brain and decided to get my bachelor’s degree in neuroscience at George Mason University,” says Esther. The pursuit was largely personal, but she knew that patient care was her passion. She continued working as a registered medication aide and CNA for Novant Health Systems and also Birmingham Green/Willow Oaks in Manassas, Virginia.

At Birmingham Green/Willow Oaks, Esther was encouraged to consider nursing. “I’d thought about it before but when she suggested it, I knew it was meant to be,” says Esther. She researched online programs and found American Sentinel College of Nursing and Health Sciences’ BSN Powered by SIMPath®.

“The SIMPath option really appealed to me,” Esther says. “You could get your assignments done on your own time and finish quickly. I had a plan to finish in 16 weeks, and I was excited to find a school that would allow me to work at my own pace.” Esther graduated with the BSN from American Sentinel in June 2021. She moved into a Registered Nurse role at Birmingham Green.

Esther is passionate about her nursing career, but her main priority is taking care of her nine-year-old daughter, who has Electrical Status Epilepticus in Sleep (ESES), a pediatric epilepsy syndrome. Her neuroscience degree has helped her give the best care possible and stay apprised of what her daughter needs.

Her end goal is to earn a Doctor of Nursing Practice. “I’d like to get into neuroscience research and to achieve that, I first need the BSN,” she says. “That’s the stepping stone I need.”

Esther has been hired as a nurse at Johns Hopkins Medicine as a nurse and accepted into the Johns Hopkins Neurosciences Nursing Fellowship. She will begin in November 2021 and move to PRN at Birmingham Green. It is a six-month specialty nurse training program in Neurology and Neurological Surgery for newly hired neurosciences nurses.

“I’m very passionate about neuroscience and I think that probably came through when I was applying and interviewing,” says Esther. “Going through this journey with my daughter has taught me a whole lot. I feel there are so many families out there who might not have had the opportunity to do what I do. I need to be in a position where I can help others out with whatever knowledge I can gain.”

Esther says that American Sentinel helped her get where she is today. “I really recommend this college and program,” she says. “I experienced a lot of support, even with this being a fully online program. I’m so pleased and impressed.”