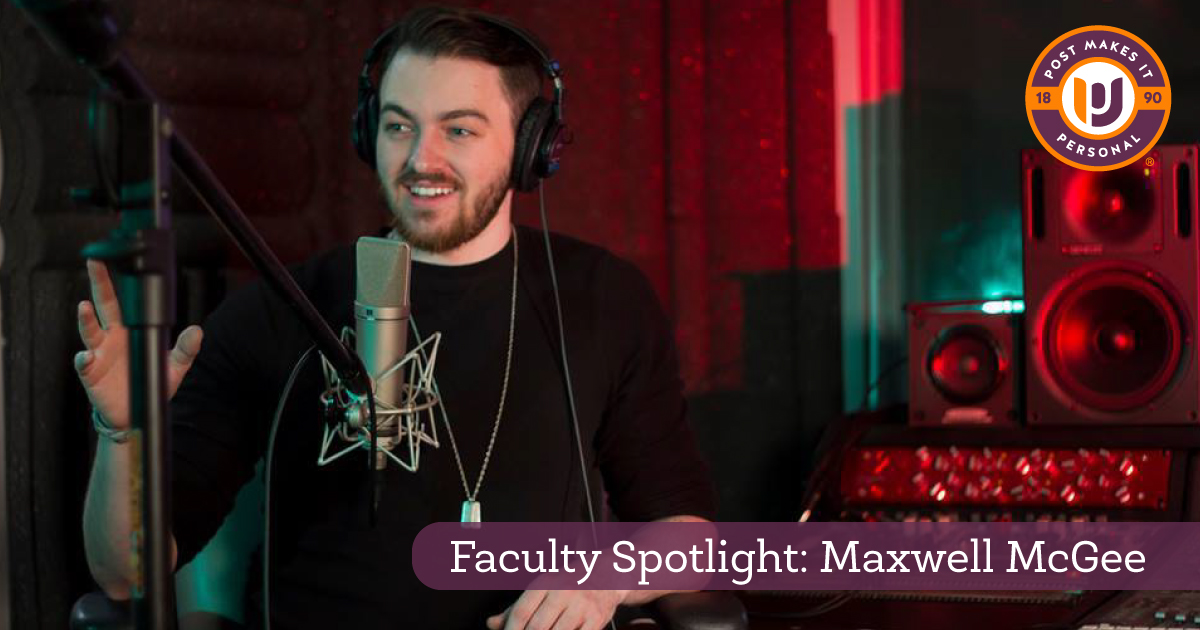 Associate Faculty in Communications Maxwell McGee is also National Award-Winning Voice Actor. McGee’s voice resonates through the nation in commercials, primetime TV, radio ads, video games, anime and cartoons. He had an innate talent as a voice actor, having won his first voice-over award in middle school. McGee also directed and produced award-winning short films, being featured in the Cannes Film Festival in France at the age of 21.

McGee was only 19 years old when he first heard his voice on the radio. He connected with Andy Mack of 93.9 the Wolf radio station in Southern New Hampshire. Mack saw talent in McGee, so when a voice actor called out sick, Mack volunteered McGee to take his place in a car mechanic commercial. He immediately began to panic, denying his ability to fill this position. Once he began recording, McGee realized the complexity and precision that was needed to deliver every word. “I was anxiety-driven. Though, I did not understand why I was smiling the entire 45-minute ride home,” said McGee.

Soon after, the client approved the commercial to be launched on air. In that moment, McGee realized that there is good stress — and he wanted to feel it again and again. “That feeling when I heard my voice on the radio for the first time was like an equivalent to skydiving or the first time one rides a motorcycle.”

Since that moment, McGee’s voice can be recognized on the radio and television in various commercials and advertisements, including CT Lottery, McDonalds, Coors Light, Cadillac, Imperial Pearl with Olivia Culpo, and many more.

However, despite this impressive list of accomplishments in his career as a voice actor, McGee shares, “Nothing can compare to the feeling I get while teaching. From the moment I taught my first class, I knew I was destined to teach. I felt it in my blood.”

McGee’s mother taught first grade for 40 years, becoming a renowned teacher in her town.  McGee did not have the best relationship with school; he didn’t feel motivated or find it easy to retain information that did not intrigue him.  However, his passion for communications developed, and he wound up pursuing a bachelor’s degree from New England Tech in 2016.

While in college, McGee continued his voice acting career. Though, he felt like something was missing in his life.  “I had always secretly wanted to teach but never thought I was capable. My instincts told me that teaching may give me that feeling I was searching for, so it motivated me to pursue my first teaching gig,” said McGee.

He began teaching at a few colleges, but McGee became very interested in teaching at Post. “I loved the idea of teaching at a smaller university. There is a sense of community within the classroom.”

McGee began instructing Intro to Communications at Post, both online and on campus in 2019. He has also designed over 30 classes at other schools including voice over, video production, graphic design, and broadcasting – just to name a few.

At times during his teaching, McGee will integrate passionate topics from his voice acting career into the classroom. He wrote his dissertation on the history of the human voice and loves sharing its significance with his students.  McGee shares, “The human voice is one of the most fascinating topics in communications. We use our voices to communicate our plans to change the world, tell others we love them, or address the public to put them at ease in a time of extraordinary crisis. Using our voices to create cool characters, epic trailers, or funny commercials is a small part of the vocal world. If you look at the bigger picture, our voices have played a role in making our civilization as advanced as it is today.”

McGee expresses that he wants to make teaching a full-time job. “I love making that impact on a student’s life. It’s those moments while teaching where a student looks up at me with this expression, telling me they just learned something that changed their life – nothing can compare to those moments,” said McGee.

“Teaching had that final missing puzzle piece in my career that I had been searching for since day one.”