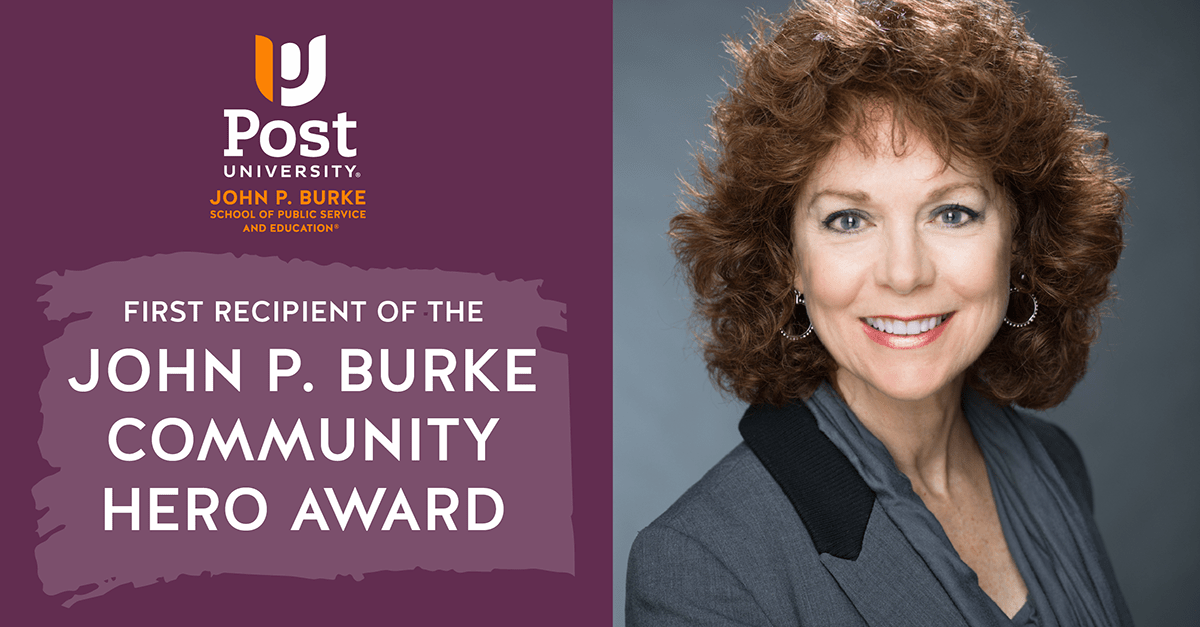 “I believe we learn most from our greatest challenges. These challenges kept me going and gave me a greater purpose. It stirred in me a passion to fight for real and meaningful change. That’s how Jane Doe No More was born,” said Donna Palomba, the first recipient of the Post University John P. Burke School of Public Service and Education Community Hero Award. Palomba is the Founder and President of Jane Doe No More.

Beginning in 2019, the Burke School created a month-long celebration, which takes place each November to honor John P. Burke’s legacy of community service. As part of the celebration, the Burke School created competitions and awards for students, including the Burke Values Essay Competition and Dinner with the Dean Networking Series, providing students with the opportunity for special recognition, framed certification and gift cards.

For the November 2020 celebration, they wanted to extend these awards beyond the student population, acknowledging noteworthy acts in areas of public service and/or education in the community. This discussion led to the creation of the Community Hero Award.

“This award recognizes an outstanding individual, group or organization whose work aligns with our Burke values and continues John P. Burke’s legacy of service to others,” said Dean of John. P Burke School of Public Service and Education Jim Whitley. “Ms. Donna Palomba was named the first recipient of the annual John P. Burke Community Hero Award for her selfless and truly life-saving work supporting and advocating on behalf of survivors of sexual crimes.”

“I am thrilled and humbled to receive this award and share it with my Jane Doe No More family, who share my passion for our mission,” said Palomba.

Palomba was born and raised in Waterbury, CT, always an active member of the community. In 1993, life as she knew it had changed forever. Happily married with two children, Palomba felt blessed. One evening, her husband had gone to Colorado for a wedding – “It was the first time in 12 years of marriage that he’d been away from home,” Palomba shares. On that very night, Palomba was sexually assaulted, and her life was threatened. The full story of what happened that night and how Jane Doe No More originated can be found here.

Traumatic does not even begin to express the pain that Palomba had to endure, not only during the attack but for so many years succeeding. She was disparaged, accused of having an affair, and was even read her Miranda rights for making a “false accusation”.

Despite the egregious behavior from the police force and the ongoing affliction Palomba had to face as a result, she did not back down—she fought back. Palomba filed a lawsuit against the Waterbury Police Department, citing 26 violations. On January 31, 2001, the defendants were declared guilty. While Palomba and her family were awarded $190,000 in damages, she failed to receive what she truly wanted—an apology.

Years later, current Mayor Neil O’Leary, who at the time had become Chief of Police of Waterbury closely following Palomba’s trial, was one of few officers who supported Palomba and deemed her experience honest from the beginning. O’Leary testified at the trial against his fellow officers and took over the case. Even after the case closed, O’Leary had kept in touch with her, listening and embracing the advice she offered to revamp the Waterbury Police Department’s policy and procedure manual to better handle cases of sexual assault.

“That initial experience with first responders could completely shut down a victim if not handled appropriately,” said Palomba. “It’s everything in that moment, to have someone listen, accept, and most importantly, not judge.”

Many revelations transpired over the next few years. Though Palomba never received an apology from the negligent officers, she finally did receive an apology on their behalf from a lieutenant on the force.

“I was brought to tears; finally, a long-awaited apology,” she rejoiced.

Then, in 2004, Chief of Police O’Leary solved the case. Eleven years after the assault, DNA evidence affirmed her attacker, John Regan, who was a good friend of her husband.

“I began to tremble uncontrollably as emotions ran from shock to gratitude to betrayal to relief to sadness,” Palomba wrote.

In 2007, Palomba founded Jane Doe No More, a nonprofit organization that empowers survivors of sexual crimes to find their voice, advance their healing and educate others.

“If there was something I could do about it, I had to. I felt an obligation,” said Palomba. “I wanted to give others hope and provide support to those who needed it. No one can get through something like that without support. I was so blessed to have my family during that time.”

The story continues to date. While her attacker was found guilty in 2004, the statute of limitations on sexual assault had a 5-year limit. Since Regan was found guilty of a separate attack, he did wind up behind bars. He is currently being held under New York’s Sex Offender Civil Management Law.

“This type of trauma is ongoing, which motivates me to continue empowering other survivors,” said Palomba. “As we grow in strength and numbers, our collective voice gets louder. What started as a whisper, when I was barely able to speak, has grown to a roar. There is no stopping us now.”

After the damage caused by this man, to then learn he would not be specifically punished for his attack on her directly, Palomba continued to fight. In 2007, the same year she founded Jane Doe No More, Palomba’s case was the impetus for the removal of the CT statute of limitations on sexual crimes with DNA evidence.

“Donna has not only fought back from a vicious assault, but she has also made this change in the law a part of her personal mission to improve the treatment of victims and the pursuit of justice,” said Former Governor of CT Jodi Rell.

Jane Doe No More currently has a team of 67 survivors who have gone through a Survivors Speak Program. Many now serve as Jane Doe No More volunteers educating students at appropriate grade levels on topics around consent, safe and unsafe touch and rape culture, as well as engaging in community outreach programs and so much more.

“It is important that each victim understands it is his or her personal and individual decision on whether or not to share their story,” said Palomba. “But it is absolutely crucial for every victim of any type of sexual crime to know that they are not alone, and they are NOT AT FAULT.”

Palomba not only impacted the lives of many by sharing her story, but she also fought to make a difference in Waterbury and the State of CT to assuage additional pain following an assault. Palomba has and will continue to make a difference, which goes far beyond that of the Waterbury community.

The John P. Burke School of Public Service and Education empowers students to achieve their academic and career goals by offering programs designed to address society’s most challenging issues. Through our focus on social justice, equity, and inclusion, we prepare our students to become collaborative and innovative professionals who serve their communities as public servants, educators, advocates, and leaders.