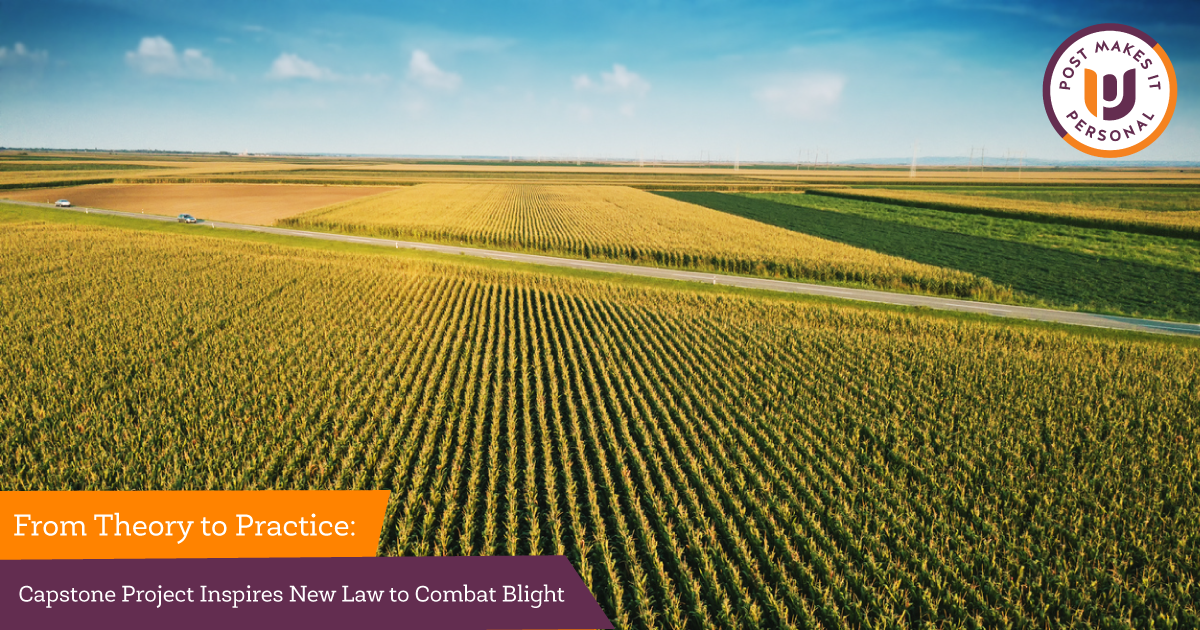 In an email to his Capstone advisor, Daniel Lauer (’16) shares exciting news.

“I wrote my master’s thesis back in 2016 on creating a land bank to reclaim blighted and abandoned properties. A critical component was creating state enabling legislation. I worked in partnership with the Connecticut Conference of Municipalities, City of Hartford, and Local Initiatives Support Corporation, the nation’s largest community development organization during the 2019 legislative session, and am very happy to report that the bill passed the Connecticut General Assembly House and Senate unanimously. The new law allows municipalities to establish land bank authorities.

I want to thank you and the Post University MPA program for providing me with the knowledge, skills, and abilities to accomplish this. As you know, getting a bill through the General Assembly on the first go is no easy feat. I also thank you for providing honest and open feedback on my thesis. I think there was more red ink than black on my initial draft! I thought about running for the hills and shifting gears to another topic. Thank you for your encouragement and feedback to stay the course.”

What is a Land Bank? A land bank is a tool for local government and the community to convert vacant, abandoned, and foreclosed properties into productive use aligned with community priorities and local land use goals. Land banks focus on properties that the private real estate market has rejected, typically due to complicated legal and financial issues that make them difficult to sell.

Connecticut is one of a dozen states that have passed land bank legislation since 2011. According to the state’s Office of Legislative Research, Connecticut’s law establishes a framework for municipalities, on their own or with other municipalities, to create nonprofit land bank authorities in order to acquire, maintain, and dispose of real property, other than brownfields (abandoned or underused sites where actual or potential pollution prevents redevelopment, reuse, or expansion).

The Center for Community Progress, a national nonprofit based in Flint, Michigan that helps communities develop strategies to address “problem” properties, estimates that in 2018, there were approximately 170 land banks and land banking programs operating in the United States. Not surprisingly, the overwhelming majority are located in the industrialized northeastern half of the country, where so-called “legacy” cities have experienced population loss and financial decline – conditions which foster urban decay and blight.

Land banks provide an opportunity to reclaim blighted properties and then transfer them back to responsible ownership. The means to accomplish this goal depends on the language of the enabling statute.

A report commissioned by the U.S. Department of Housing and Urban Development on revitalizing foreclosed properties notes that land banks acquire properties through tax foreclosure, intergovernmental transfers, nonprofit transfers, and open market purchases. Tax foreclosures are the most common method of acquisition.

Connecticut’s law requires that a board of directors govern each land bank and gives the board the power to borrow money, issue revenue bonds, and develop and acquire property, but not by eminent domain. It exempts from state and local taxes any real property that the bank holds, and the income derived from it. The law also requires municipalities to remit to the land bank 50% of the taxes they collect on the property in the following five years. Land banks may issue revenue bonds backed by the revenue from their property sales. Additional funding sources include nonprofit, state, and federal grants, and local general fund appropriations.

Land banks are not a quick fix. Obtaining financing, delays occasioned by legal processes, and educating communities to achieve stakeholder buy-in present significant obstacles. Nevertheless, according to HUD, “land banks are an effective tool for stabilizing communities burdened by a large number of vacant, abandoned, or foreclosed properties.”

Thanks in part to the efforts of a Post University MPA alumnus, Connecticut has joined the growing number of states that have authorized municipalities to establish land banks to help revitalize their communities.