By Kathryn Shpak, Storyteller I

“I thought it might be challenging at first, but then I realized…we don’t all need to speak English or Norwegian. We just need to talk hockey,” said Peter Whitney, men’s hockey coach.

Whitney went to Norway for a week this August to help run a youth hockey camp. The camp was run by Stavanger Youth Hockey, one of the largest organizations in Norway. His friend, who is a coaching educator for USA hockey, got connected with the director of Stavanger youth hockey, and reached out to Whitney to help run it.

Whitney had never been to Norway before and learned a great deal about the distinctions between hockey in American versus hockey in Norway. Just as we have a “no child left behind” policy in school systems, Norway also has it in athletics. Children under the age of 13 all have equal playing time and will not be cut from a team. This policy allows children the chance to play and develop their skills.
These kids travel hours to play other teams and even take four to six flights each year to play hockey in other cities. Unlike America, where we typically play neighboring towns at such a young age, they travel all over. 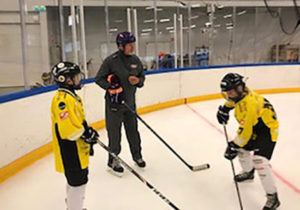 The youth hockey camp had about 170 boys and girls between the ages of six and fourteen and were separated by age. Whitney worked with all the groups and spent seven to eight hours each day on the ice. Off ice included “theory sessions,” where he would teach something valuable. These sessions had a range of topics from how to prep for a game to how to always show respect. Whitney told the kids, “You don’t do anything you wouldn’t do at your grandma’s house.”

The challenging part for Whitney was that not all the kids spoke English. While they had some kids translate the theory sessions to one another, Whitney was able to communicate with each of them on the ice. Whether using hand signals or gestures, they all understood him. “Hockey became the universal language,” he said.

“This experience helped make me a better coach.”