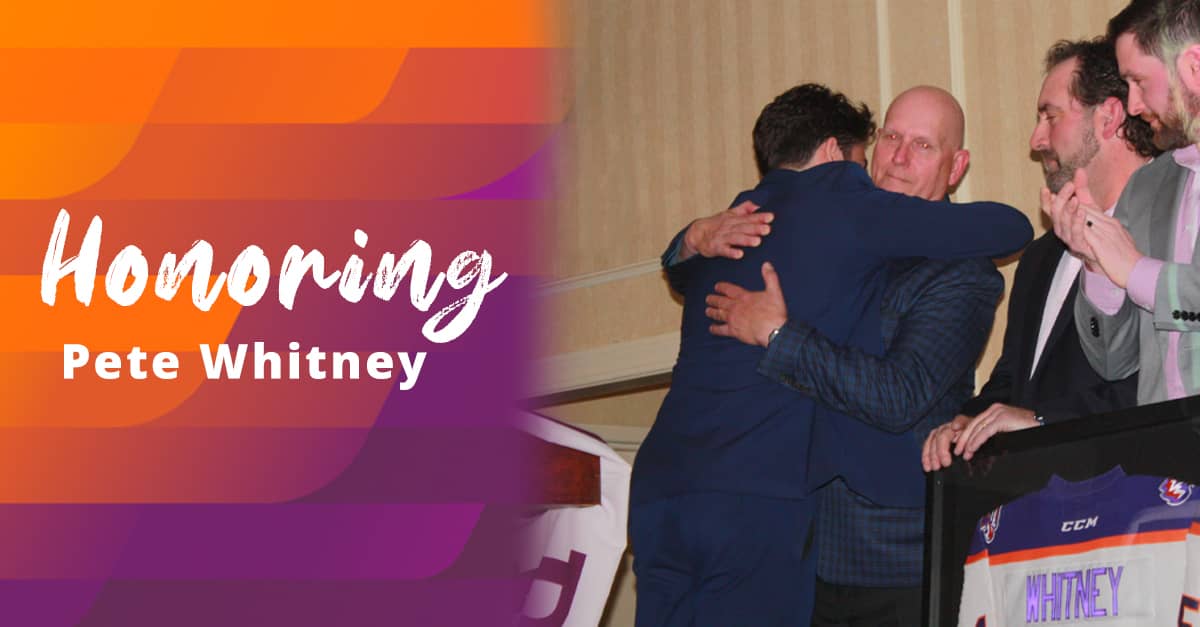 When he was hired in 2015, Head Men’s Hockey Coach Pete Whitney’s task was seemingly uncomplicated: build the University’s new men’s ice hockey program. “I was hired in April of 2015 to create a program with players, a schedule, and staff,” he reflected. “All of this had to be accomplished in 4-short months to be ready for a season that fall. We were able to do that.” What started out as seemingly uncomplicated ended up becoming something truly special.

At the end of the 2022 Swoopy Awards, it was announced that Whitney would hang up his skates and retire after six seasons as head coach. His accomplishments over the last seven years are noteworthy. Boasting a respectable 35 career wins with the Eagles, Whitney led the team from competing as an independent to being an invited member of the Northeast-10 conference. During the 2021-2022 season, the team not only won its first NCAA playoff game but came up one goal short in the conference championship against Assumption College.

“I accomplished what I was hired to do,” he said. “That was create a program, get into a league, and be successful. Going to the finals in only the second season in the league speaks volumes of the dedication of the players, the staff, and the support from the University.”

“The athletic, the personal and, in some situations, the academic odds that some of my guys have overcome speaks volumes that our mantra of ‘one family’ is real and not just a catch phrase,” he shared.

In his remarks recognizing Whitney, Junior Psychology major and Hockey Forward Jack Engdahl reflected not only on the family the teams he has coached have become, but their accomplishments off the ice under Whitney’s leadership.

“You can remember Whit for any number of incredible things,” Engdahl said. “Consistently leading his team to the top of Division II for community service, […] three of his six teams winning the Swoopy for highest team GPA, […] mentoring a player that would go on to be nominated for Hockey Humanitarian of the Year, […] or his bone-crushing handshake. But what I’ll remember Whit for… is the family he gave us.”

Thinking about what he wants his legacy with the Eagles to be, his response is seemingly uncomplicated but truly special.

“The continued success of the program and to be remembered as someone who cared about his team would be enough for me,” Whitney said.

Engdahl’s full remarks that he delivered during the 2022 Swoopy Awards follow.

First, I’d like to say how honored I am to have been asked to say a few words about Coach Whitney and what he has meant not just to the players he’s coached here at Post, but to the school as a whole. When Karin asked me to do this, my first thought was how can I make a joke about that shiny bald head? I spent a bit of time messing around with some pretty bad jokes and decided if I just got up here and winged it, it would be glaringly obvious… the joke that is.

No, but seriously, I couldn’t be happier to have been a part of something more than what Coach Whit has put together here in 7 short years. In 6 seasons Coach Whit built a program up from nothing, collecting players who could live under one word: Family. Those 6 short seasons saw Coach Whitney work to go from an independent looking across the NCAA for 20 games, to an honorary member of the NE10, to winning his first NCAA playoff game, and finally resting as Post Men’s Hockey came up 1 goal short in the conference championship in its second year in the league.

You can remember Whit for any number of incredible things – consistently leading his team to the top of Division II for community service; winning 2 Swoopys for most community service hours, mentoring a player that would go on to be nominated for the NCAA’s hockey humanitarian award, 3 of his 6 teams winning the Swoopy for high team GPA, or his bone crushing hand shake – but what I’ll remember Whit for, and I know I speak for those who have come before me, those here with me now, and those yet to come; what we’ll remember most about Whit is the family he gave us.