Lecture: Intelligence and the Terrorist Threat: How Far Have We Come Since 9/11

James Olson, Veteran Intelligence Officer and author of the book, “The Moral Dilemmas of Spying,” will present his lecture “Intelligence and the Terrorist Threat: How Far Have We Come Since 9/11”

The event is free and open to the public. Advance registration is required. 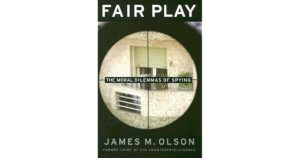 “This event is a collaboration between Post University’s John P. Burke School of Public Service, the Waterbury Police and Fire Departments, and our friends at Holy Cross High School,” reports David Jannetty, Program Chair for Post University’s Emergency Management and Homeland Security program. “Students from our EMH Club are also active in the event’s planning, and we are grateful to a donation from a respected Waterbury business community member for their donation to bring this world-renowned speaker to town.”

“James Olson is a legend in the clandestine service, having served in some of the most difficult, dangerous, and complicated assignments at the height of the Cold War. As director of central intelligence, I trusted him without reservation when he was chief of counterintelligence not only because he was enormously capable but also because I knew he thought deeply about the ethical and moral dimensions of what we did every day.”
— Robert M. Gates, Director of Central Intelligence, 1991-1993.

A career officer in the Directorate of Operations of the Central Intelligence Agency, serving mostly overseas in clandestine operations. Served as Chief of Counterintelligence at CIA Headquarters in Langley, Virginia. Overseas assignments in the U.S.S.R., Austria, and Mexico. Foreign languages: French, German, Russian, and Spanish.

Assigned by the CIA to the George Bush School of Government and Public Service in College Station, Texas, as an officer-in-residence in December 1997. Teaching courses on Cold War Intelligence, U.S. National Security, and International Crisis Management. Frequent guest lecturer at other courses, conferences, and symposia. Appointed a permanent faculty member of the Bush School in August 2000.

Author of “The Ten Commandments of Counterintelligence” and “Fair Play: The Moral Dilemmas of Spying.”