Land That 5-Star Recruit: What Public Administrators Can Learn From College Football 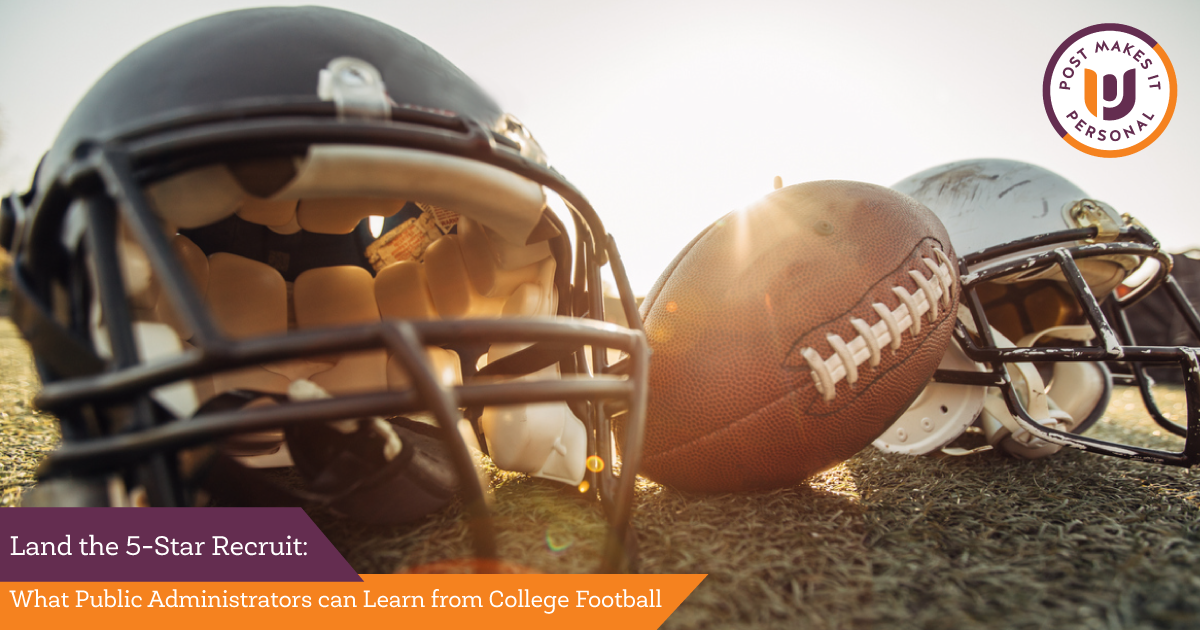 As governments continue to compete for the most qualified candidates for public service careers, agencies need to take a step back to ensure that their recruiting efforts do not just begin at the application process. Whether it is a lack of personnel or even a general acceptance of past practices, merely processing job applications is insufficient to secure new talent. It is not enough to have interns, attend job fairs, or set up booths at your local college dining hall entrance. The actual recruitment process is a matter of identifying preferred traits, finding individuals with them, and making a connection on a personal level. A presentation or table filled with literature just won’t get the job done.

I once was told that military recruiters roam local malls because that is where they make their best connections with teenagers who are looking for direction in their life. College football recruiters look to those high school teams that are the best performing and play the most demanding schedules. In both instances, recruiters go to where they make the best connections. They are proactive. They do not wait until the prized recruit decides to go online and fill out an application.

Once that prized recruit is identified, successful recruiters develop and nurture relationships. They meet with the recruit’s parents and other significant family members. They focus on what is important to the recruit, such as church, sporting events, and school functions. They call or text as a matter of routine, visit multiple times, and invite recruits to visit their campus, especially during special events or important games. In short, recruiters engage prospects where they are in ways that say in no uncertain terms, “You are an important part of our team’s plan.”

This investment is critical because recruiting is critical. A 2009 study published in the Journal of Quantitative Analysis in Sports, found that recruiting higher-level athletes not only had a direct correlation to the success of the football team but also posited that this success had a direct impact on being able to recruit more of the highest-rated athletes the next year. In other words, success breeds success. There are lessons here for organizations and public sector agencies in particular.

Be strategic. Identify the characteristics of your best employees and then look to where you found them. Make visits to military bases, college campuses, and civic groups routine instead of relying on special events. Tailor your military base visits to units that have relevant skills and traits. For example, engineering units have heavy equipment operators, while personnel units have computer specialists. Learn the names of personnel that are nearing their expiration of service.

Next, establish connections. Develop a relationship on an individual level with the recruit by assigning employees with similar backgrounds. Call and text regularly to establish your commitment to having them join your organization.

Effective recruiting is a proactive process. The success of your organization depends on the talent that you bring into the workforce. In return, your employees will help you recruit additional talented candidates. Committing to the personal touch will land the 5-star recruit every time.

John Polak is a lieutenant in the Newport News, VA police department.