If you are a runner, you know the first Sunday in November is special. It is the New York City Marathon.

This Sunday, November 4, Transitions Program Coordinator Mary Polchaninoff will double knot her Adidas Boston Boost sneakers, and run through the five boroughs of the city — Staten Island, Brooklyn, Queens, The Bronx, and Manhattan. She is running with her daughter who got her hooked on this sport as a challenge 10 years ago.

Mary is one of the 50,000 runners who will make the 26.2 run from Staten Island to Central Park. This is her second NYC Marathon. She is part of Fred’s Team, a running group dedicated to raising money for cancer research at Memorial Sloan Kettering Cancer Center. 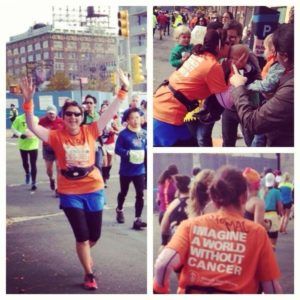 Five years ago, her niece’s son, Mac, diagnosed with cancer was receiving treatment at Sloan. Sadly, Mac passed away. On Sunday, Mary will run with Mac’s name on the back of her shirt along with the names of others who are fighting cancer. Mary realizes that cancer research makes a difference that goes far beyond the finish line.

As a charity runner, Mary and her daughter will go off in the fourth wave of the race. They will head out on the course around 11 a.m. The pair will be following in the footsteps of the elite runners like Shalane Flanagan, last year’s Marathon winner and Sarah Sellers, a full-time nurse anesthetist and second-place finisher in this year’s Boston Marathon, who begin their race at 9:20 a.m.

The first two miles of the course begin in Staten Island. “It’s an awesome view with the Statue of Liberty in front of you,” Mary said, who has run the New York City half-marathon three times.

“That’s my favorite. Times Square is closed for runners. It’s so cool.”

Mary will cross the Verrazzano Bridge and head toward Brooklyn. For the next 11 or so miles, she will run on the flat streets of Brooklyn. When she crosses the Queensboro Bridge, she will be at the midpoint of the 26-mile course. The next four miles, her legs will carry her though the streets of the Bronx. By now, Mary will have run nearly 20 miles. The next few miles she will travel though Harlem. She will run up Fifth Avenue and enter Central Park at around the 23-mile mark. She will exit the Park near Columbus Circle make a right turn on Central Park South and head toward the finish line.

Her goal is to finish the race in five hours. As she runs along the course, she will be posting on Facebook capturing the special moments. The last time Mary ran the Marathon, her sister called her on the course. “She was following my posts and thought I was done,” Mary joked.

Legs and lungs, Mary. May the wind be at your back. Your Post family is cheering for you!