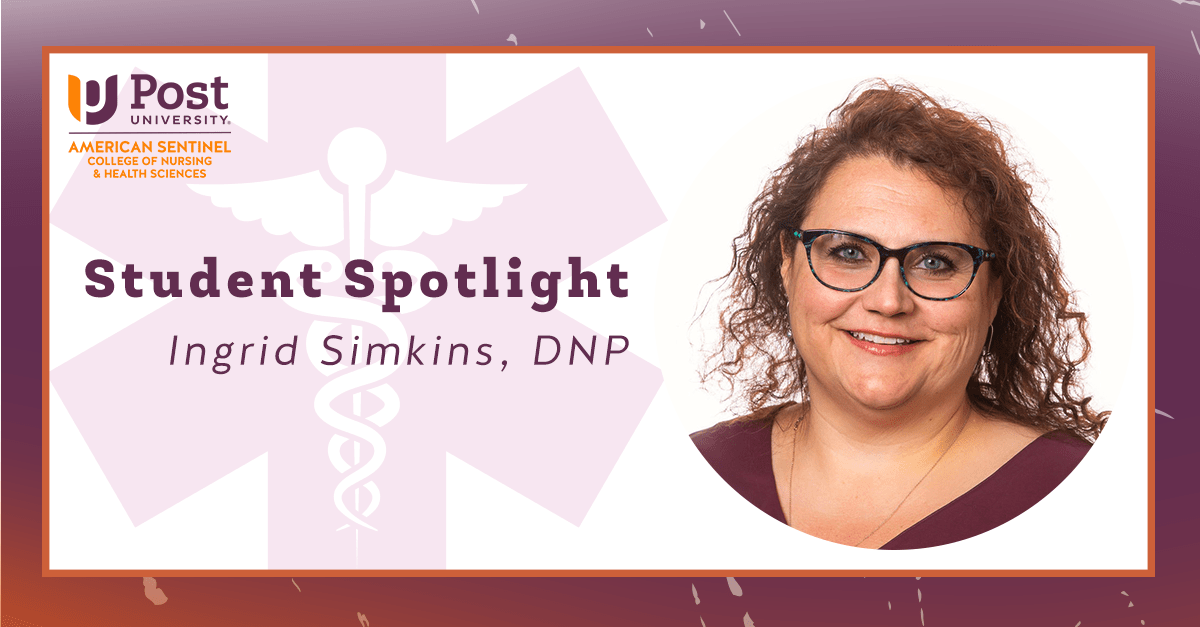 As Ingrid Simkins nears the end of her Doctor of Nursing Practice in Educational Leadership at American Sentinel College of Nursing and Health Sciences, the Michigan native admits she can’t help but think about the words that her mother wrote in her graduation card after completing the BSN at Michigan State University.

“I remember her writing that there were two things I did as a child: I had a little chalkboard and I used to play teacher, and I admired a pair of white shoes in the window of a shoe store at our local mall that my mom told me were nursing shoes,” says Ingrid. “I remember telling my mom, ‘If those are shoes for nurses, then I want to become a nurse.’” She fulfilled that dream in 1992, graduating from nursing school and beginning her career in the telemetry unit of Beaumont Hospital – Royal Oak.

Ingrid’s entire clinical career was at Beaumont, but in 1995 she moved from telemetry into the medical intensive care unit. She loved her work, and to her surprise, her bedside nursing experience also showed her how much she enjoyed education as well. “I rarely was without an orientee or nursing student alongside me,” says Ingrid. “I was always drawn to teaching, and I was certain I wanted to go to the academia route.”

At the same time, Ingrid pursued an MSN in nursing education at Michigan State, her BSN alma mater. One of her projects was to interview a nursing leader and she reached out to a woman at a nearby community college. “At the end of our discussion, she said, ‘Do you have a résumé?’ And before long I was teaching as an adjunct there.” In 2008, Ingrid left the bedside patient care to pursue education full time. She joined Baker College as a nursing faculty member and stayed until 2014. By the time she left, Ingrid was assistant director of nursing for the college.

In 2014, Ingrid made a big life decision. She had long wanted to move to a warmer climate and the timing was right with her daughter finishing up middle school. She planned her move to Arizona, researching schools where she could apply to teach. “I was impressed with Glendale Community College, and I applied and it just came together,” she says. Ingrid got the job and made her move south. She is the weekend cohort coordinator and a nursing faculty member.

As she settled into her new position at Glendale, Ingrid started thinking about furthering her own education. “The truth is, I have been thinking about getting a doctorate before we even moved to Arizona but set it aside for a while,” she says. “Once at Glendale, I found there were several other colleagues with the same ambition, so it didn’t take much convincing to get started.
Ingrid and three fellow faculty members followed in the footsteps of another colleague, who had graduated shortly before from American Sentinel’s DNP Educational Leadership program.

While holding down a full-time job and going to school has been a lot, Ingrid says American Sentinel’s support systems make it doable. “The program is really seamless,” she says. “Instructor feedback is prompt and on point. And beyond the great curriculum and how it is set up, the faculty and staff are so supportive. I never have to wait long for a reply and I always feel like their main objective is to help students succeed.” Ingrid will graduate with the DNP Educational Leadership in October 2021.

While Ingrid does not need to obtain a doctorate to teach at her community college, she felt the investment was important. “Glendale is very supportive of continuing education, and I was at a point in my career where there was reflection and introspection,” she says. “I’m doing this because I want to become a better version of myself.” Ingrid‘s capstone project is something she is applying at Glendale as well. It is titled, “Using an Individual Perform Simulation to Impact Nursing Students Perceptions of Their Medication Administration Performance.”

As she nears the finish line, Ingrid has only one regret. “I wish I’d done this earlier,” she says. “But in many ways, it worked out as it was meant to because I found American Sentinel. And the people I have met through the practice experiences have been a wonderful addition to my network. I’ll be proud when I am finished, and I think I’ll be a better person on the other side of this accomplishment.”