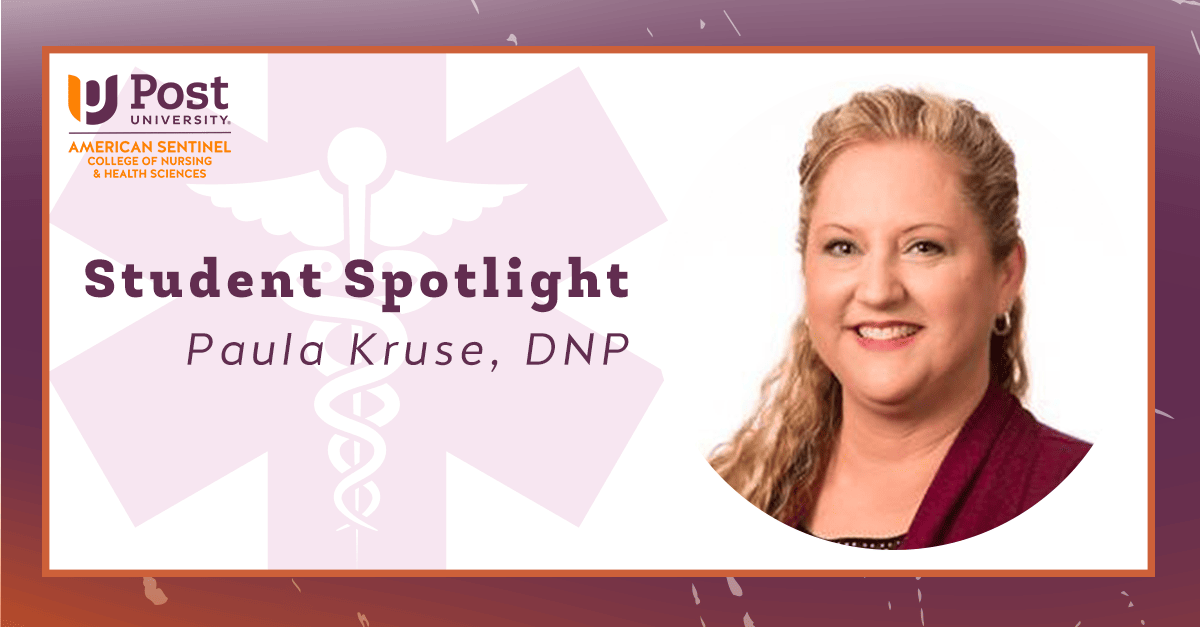 Paula Kruse never imagined that she would be completing a doctorate degree just after turning 50 years old, but that’s exactly how it played out.

The Michigan native was a young mother, having a child during high school. And while she wanted to go to college at the University of Michigan to become a nurse, motherhood forced her to grow up quickly. “I have wanted to be a nurse since I was a little girl,” says Paula. To support herself and her daughter, she started her career at an automotive dealership in the Chicago area. Over time, she worked her way up to director of fixed operations.

In the mid-1990s, Paula returned to Michigan—by then a mother of two children. She joined another automotive dealership, where she met her now-husband of 13 years. “In 2009, he said to me, ‘You need to pursue what you’ve always wanted. Now is your time.’” That encouraged Paula down her new path toward nursing. First, she started as a Certified Nurse Aide at a nursing home while going back to nursing school. “From the start, I loved it. I loved working with the geriatric population, and I loved taking care of others. It made me feel good.”

In 2012, Paula earned the BSN at Davenport University. She started her nursing career in home health but then joined the State of Michigan Department of Human and Health Services, working in the state psychiatric hospital. She is still there today. “Our hospital houses patients with severe mental illness, largely working with those who have been court-ordered to receive treatment, who are criminally insane and being restored to competency to stand trial for criminal acts,” she explains.

For Paula, working in the mental health world is meaningful and important. “I think there is a huge stigma with mental health and I want to help people who are often overlooked,” she says.

It didn’t take long for Paula to begin thinking about how to better herself and boost her resume. “I started thinking about the administration of the nursing operation and it excites me,” she says. “I knew I needed more business and management knowledge, though, so it seemed like an MBA would be beneficial.”

So began Paula’s search for the right MBA program. She knew that online was important, given her busy work and life schedule. “I found American Sentinel’s MBA Healthcare and it was just right,” she says. “I felt like the onboarding was amazing and I liked the idea of an MBA geared toward the unique healthcare industry.” Paula started the program in 2015.

Planning for the Long Game

Months into her MBA Healthcare program, Paula knew she wouldn’t stop at a master’s degree. “Leadership has been a goal of mine since I started nursing, and I felt like the DNP Executive Leadership would make me a great candidate to run our hospital one day or do something similar.” After graduating in 2017, she began the DNP program shortly thereafter.

The interaction with professionals around the country was a highlight of the program for Paula, as was the course work. “Every class really prepared me for the next and I found myself applying various things to my work at the psychiatric hospital,” she says. Her capstone was titled, “De-escalation Technique Education: The Effect on Student Nurse Perceived Self-Confidence in Coping with Patient Aggression,” something she deals with daily in her job. “I’d love to help student nurses learn de-escalation techniques with aggressive patients because that’s something I had to learn on the job.”

Paula finished the DNP Executive Leadership program in October 2021 after three years of hard work. Her only regret: not going into nursing sooner.

“I feel really good about where I’ve ended up,” she says. Although she enjoys her work, Paula is open to a variety of future possibilities. “I love leadership and I love the idea of teaching one day to give back the knowledge that I’ve gained in my career. I’m a goal-oriented person and I’m very happy and proud to achieve this milestone. The terminal degree is a feather in my cap that I know will help me.”