It takes a strong, driven individual to go back to college and earn a degree as an adult learner. It takes a whole other level of drive and dedication to keep coming back and striving for higher and higher levels of academic achievement. 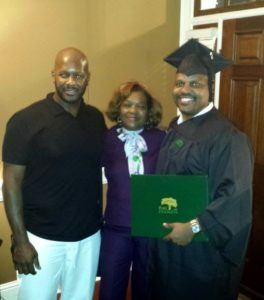 Forty-eight-year-old recent Post graduate and current Post MBA student, Dwight N. Rodgers, Sr., holds that very special kind of dedication. Rodgers first went back to school to earn a Certificate in Human Resources Management from Post in 2011. Since then, he has gone on to earn his A.S. in Management from Post in 2012 and, in May, graduated with his B.S. in Management. He didn’t stop there. Currently, he is enrolled in Post’s Masters of Business Administration degree program with a concentration in Project Management.

“If Post had a doctorate’s degree in Business, I would be there,” said Rodgers. “What can I say, I just love Post University.”

It didn’t take long for Rodgers, who is currently the President and CEO of D.R. Management Group, Inc., a nonprofit development and consulting company, and a General Manager of a Starbucks in Montgomery, Alabama, to become hooked on higher education.

“I was leery at first about going back to school, but the Human Resources certificate program I enrolled in was very interesting,” Rodgers said. “Once I received the certification, it sparked something inside me, like, this is it, this is what I want. I want to continue my education here. Everything Post claimed they would do, they did.”

Those claims originally came to Rodgers in a discussion with Post’s Military Program. Rodgers was an Army veteran who served in Desert Storm in the early 90’s. After focusing on his country and his family for as long as he could remember, Rodgers felt it was time he did something for himself, and he decided earning a college education was the best way to do that.

“I was looking for an institution that was military friendly, and Post was the best fit for me,” he said. “They didn’t just say how veteran friendly they were, they showed it. They also explained that the program was growing, and I felt I had the opportunity to grow with it.”

Rodgers said it was doing something for himself that got him back into school, but it was the motivation of his family and friends that were the driving factor that kept him coming back.

Rodgers credits Post with helping him move up the line in his career and helping him achieve positions and goals he once believed were unattainable.

“Everything I’ve learned while at Post, I’ve been able to apply to my professional life immediately. It’s not just theory – its reality,” he said. “The work teaches you to think at a managerial level.”

The Post graduate doesn’t just appreciate what his education has brought to his own life, he shares it with others. Through Rodgers’ recommendations, his nephew and three friends have also enrolled at Post.

“I would recommend Post to anyone,” he said. “I would tell them to do their homework, so they could see that what Post says is validated. The flexibility is there, the instructors are there to help, and you won’t be left alone. It’s really an environment where you can grow and think outside the box, and you’re guided through the process. In the end, you’re rewarded for your work.”

And Rodgers has seen that reward for his work, time, and time again.