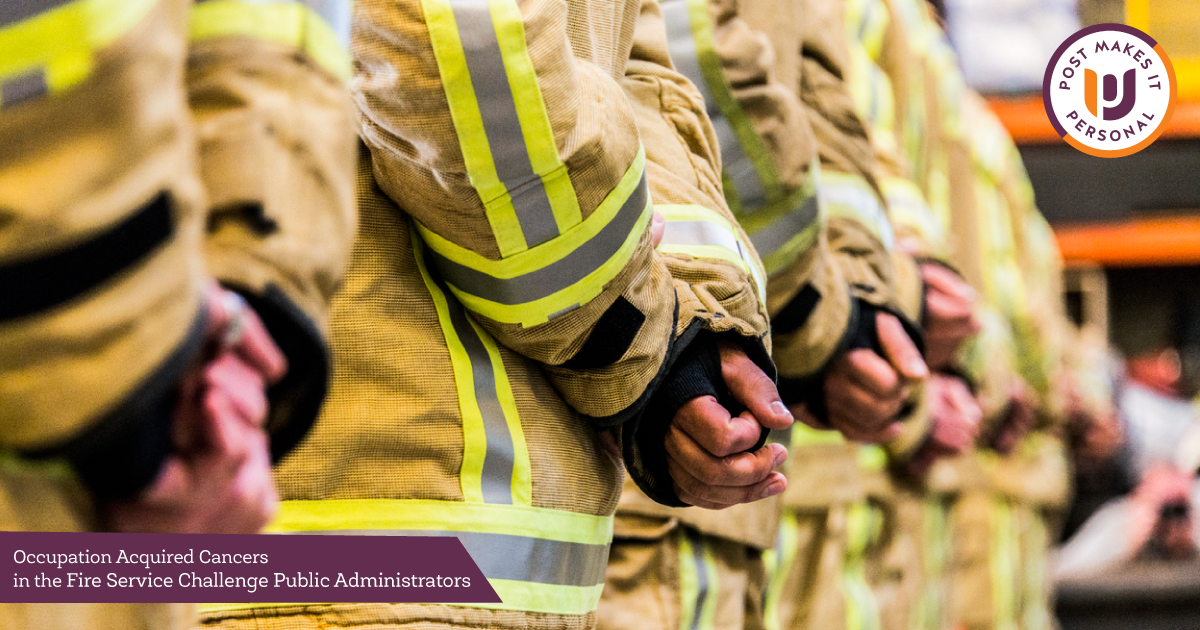 Throughout the United States, firefighters are increasingly developing occupation-acquired cancers with a concurrent rise in mortality. In 2016, the State of Connecticut created the firefighter cancer relief program and an account to provide wage replacement benefits to eligible paid and volunteer firefighters diagnosed with cancer. Public administrators and emergency managers need to develop and implement plans and policies to not only manage costs but also to reduce the risk and prevalence of firefighter-related cancers. This is imperative in cities like Bridgeport, Connecticut, where aging, midcentury building fires expose firefighters to disease-causing carcinogens.

Before World War II, most of the buildings and housing stock in the United States were constructed from wood, glass, and metal. When engulfed by flame, the by-products yielded toxic carcinogens in relatively low levels. By the mid-20th century, traditional building construction transitioned to so-called ”modern construction,” with its heavy reliance on synthetic materials such as plastics, polymers, styrene, rubbers, and acrylics.

Synthetic materials produce more smoke than natural materials, and the combustion of the synthetics generates irritants and airborne carcinogenic byproducts containing polycyclic aromatic hydrocarbons, or PAHs. PAHs, a class of chemicals with more than 100 naturally occurring variations, are released in the smoke from burning buildings and furnishings. According to the Centers for Disease Control, the most significant endpoint of PAH toxicity is cancer.

In 2010, the National Institute of Occupational Safety and Health conducted a multi-year study involving approximately 30,000 firefighters. Researchers found that firefighters demonstrated a nine percent increase in cancer diagnosis and a fourteen percent increase in cancer-related deaths compared to the general population. Firefighters faced a higher likelihood of being diagnosed with certain cancers at a younger age and of dying from specific cancers. According to the International Association of Fire Fighters, from 2002-2016, 61% of firefighter line-of-duty deaths were cancer-related.

The city of Bridgeport was chartered in 1836 and experienced its most significant growth in the 19th century. By the 1840s, the City had become a booming industrial center producing everything from sewing machines to ammunition. At the outbreak of World War I, the population expanded from 100,000 to 150,000 in 20 months as the City became Connecticut’s leading industrial center. In the 1940s, Bridgeport again saw significant population growth, primarily due to its ability to manufacture and supply the country’s wartime equipment and machinery needs. Housing built to accommodate this growth reflects the use of modern construction materials, namely synthetics. Today, much of the mid-20th century housing and industrial stock is vacant and decaying.

Estimating the total cost of cancer treatments is challenging. In the United States, the direct cost of cancer is approximately $124 billion per year and results in approximately 33 million disability days per year, with $7.5 billion in lost work productivity. According to the National Cancer Institute, cancer is among the most costly medical conditions to treat in the United States, with the price of treatment continuing to grow.

The staggering cost to governments and firefighters and their families suggests that proactive steps need to be taken to reduce the incidence of cancer in the fire service. Currently, efforts focus on washing gear, field decontamination, and evaluating the efficacy of health screenings. However, more research is needed to assess the value of these measures. In the meantime, containing costs is challenging public administrators as they grapple with rising insurance premiums and ever-tightening budgets.

Thomas Varanelli is a firefighter in Bridgeport, CT, and recent MPA graduate