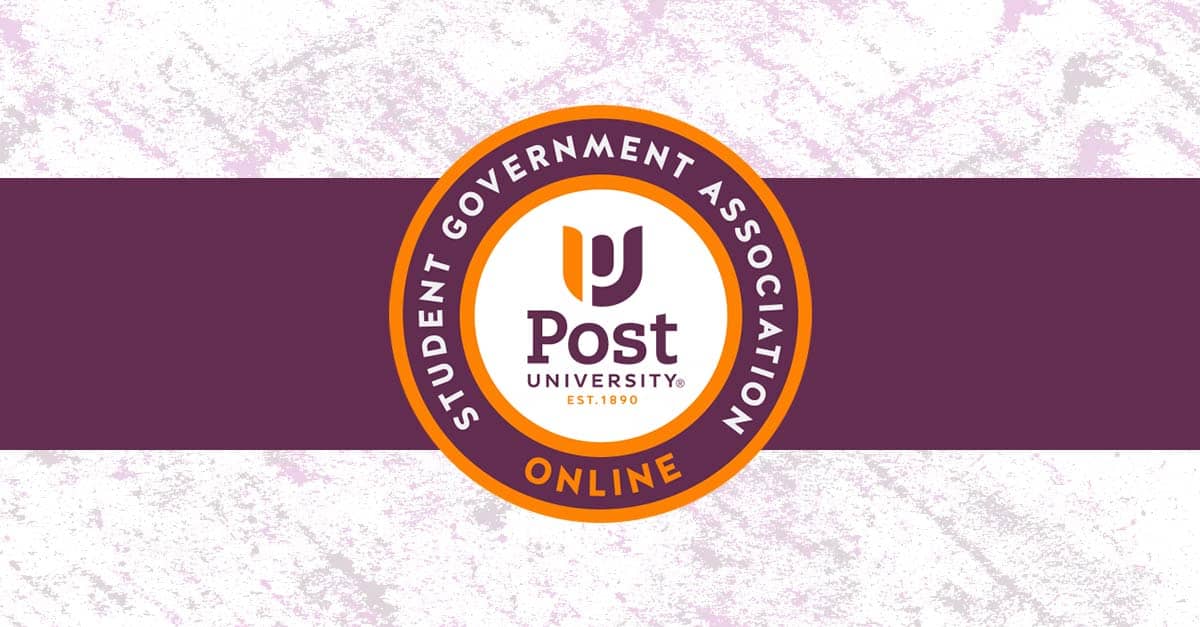 In the summer of 2019, Post University expanded its Student Government Association to bridge the gap between main campus and online students. The first E-Senator and President of OSGA (online student government association) Jerrod Pass not only embraced the responsibility of starting a new program, but he has also successfully grown and enhanced the program over the past year.

“There has been so much growth within the OSGA and there is hope for so much more. With the dedication that the students have leading the charge, wonderful things will continue to develop,” said Dean of Students Erica Peryga.

In the fall of 2019, there were five students in the OSGA. Since then, that number has increased to a total of 32 members.  These students have held virtual town hall meetings, published surveys, and virtual information conferences.

“Having the vision and actually putting it into play was the hardest thing I could have done – but it happened. I did not do it alone, so if anything, teamwork is what I will be striving for the most in my future,” said Pass.

Since Pass will be graduating with his Master of Business Administration this year, new elections took place this past February.  Post University’s new OSGA President is Tyrese Williams, a third-year, 32-year old psychology major in the honors program. When asked why representing the student body was important to him, Williams responded.

“It is important to me as an individual to represent the online study body in any position because when I was very young, I lived in Washington, D.C. and witnessed the September 11th, 2001, attack on the pentagon and watched on television, while in school, the attack in New York City. On that day, I told my class and my mother that I wanted to do more, and I would join the Armed Forces to help everyone.

Since that day, I am a psychology major student, a United States Army Staff Sergeant, I have served on combat tours overseas, and I volunteer at a Treatment Center for juvenile delinquents to help them work through what I hope is their last worst day. I do all of this for the same reason I told my United States Army Drill Sergeant during basic training when he asked “Solider!! Why did you join the United States Army?” and I responded, “Drill Sergeant! Because I saw a need in the world for people to help people and for those that cannot stand up, Drill Sergeant!”.

Current Vice President of the OSGA Marissa Daly was one of the first members to join in 2019. Witnessing that students wanted opportunities for greater involvement in their experience outside the classroom, Daly formed a desire to take on a leadership role to give them that chance.

“I wanted to make a change,” said Daly. “I wanted to do everything I could to make the online students feel that their thoughts, opinions, and feelings mattered and that they are, in fact, important to Post University. I went from seeing very few students know of our presence to now seeing so many more people know about the OSGA and are learning how we represent the online student body.”

While the OSGA has been successful in providing a stronger voice for the online student population, the goal is for all students to feel connected to Post University and to partake in campus-life activities and events.

Campus SGA President Adasia Conley-Reed shares, “I want all students to feel comfortable talking about any problems they may have and form a bridge between the student body and administration.”

Post University has always been equally accommodating to the online and main campus population; however, the difficulty has been encouraging online students to engage and participate.

“OSGA offers students whose college campus is not right outside their living room, or the local library, a sense of community. I wanted to get involved to help other students discover what is available to them,” said OSGA Senator Rosan Walters.

Having strong student voices from their own online population enables other online students to feel connected. They now have more insight into events, meetings, and opportunities. As the OSGA grows, methods of connection and community will continue to develop.

“Post University students deserve a voice that represents them and their unique challenges as online students. I am excited to be a part of the OSGA to build the framework that provides a voice to University faculty and student leaders,” said OSGA Senator Jackie Pulley.

If you are a Post University student who is interested in becoming a member of either the SGA or the OSGA, reach out here: [email protected].