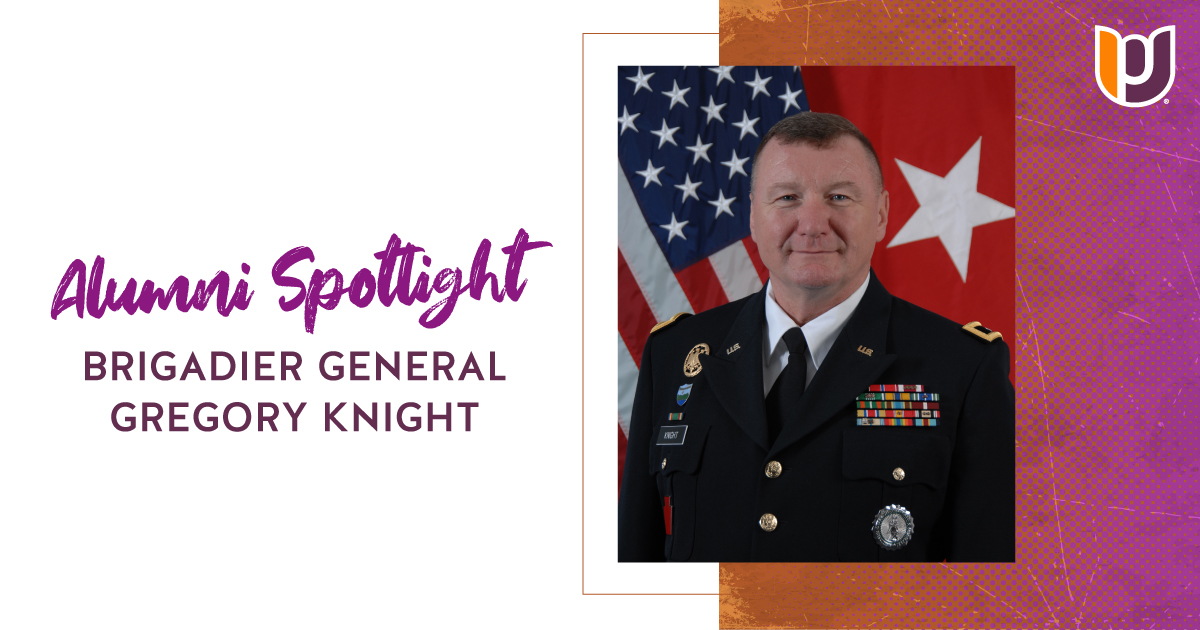 “At Post, I was most impressed with the quality of instruction. The professors were outstanding, and the academic rigor was sufficient – I was definitely not cheated in earning my degree,” said Post Alumnus Gregory Knight.

Brigadier General Gregory Knight received his Master of Education at Post University in 2015 through Go Army Education. Knight served for thirty-seven years in uniformed service, beginning his military career in 1983 with the U.S. Coast Guard.

“At age 21, I felt as though I needed something more. My neighbor was in the Coast Guard, and I always liked the structure of the military. I loved leading, and it felt like the right path for me to take,” said Knight.

After serving six years in the U.S. Coast Guard, Knight pursued a career in Vermont Law Enforcement, where he was a Police Officer for four years and a Chief Liquor Investigator for seven. He remained a part-time enlisted member of the Air National Guard. In 1997, Knight decided to pursue a full-time military career and commissioned as a Lieutenant with the Vermont Army National Guard through attending officer candidate school. Regarding his reasons for pursuing a commission and continuing his full-time service, Knight said, “I missed the structure of the military, the discipline and many opportunities that come with service. The Army National Guard offered all of that.” Motivated to continue moving up in rank, Knight pursued his bachelor’s degree. In 2001, he graduated with his Bachelor of Arts in history and was promoted to Captain in 2002.

“At one point, I thought I maxed out my career, but I realized education, especially in the military, never ends,” said Knight. “I always had an interest in teaching, so I decided to pursue my master’s degree in higher education at Post.”

Knight’s education continued both in and outside the military. He attended the United States Naval War College in Newport, Rhode Island while simultaneously studying for his Master of Education at Post University. He graduated from Post in 2015 and earned his master’s in National Security and Strategic Studies through the Naval War College in 2016.

Shortly after completing his military and master’s degrees, Knight was promoted to Colonel in 2017. He then decided to run, successfully, to become the Vermont Adjutant General for a two-year term. Vermont remains the only state to select their Adjutant General through an election by the Vermont legislature, with the 150 members of the House and 30 members of the Senate voting.

Knight shared that in order to run a campaign for seat, he had to take a leave of absence from his role as Colonel. “To compete for this position, you need to do diverse jobs,” he said. “After all, people are the center of gravity in all that we do. It does not matter how efficient a plan may be or what tools are provided to succeed without the people in place to drive a plan to fruition.”

Winning the election, Knight has been serving as Adjutant General for the past year. He works with the Governor of Vermont to support the state mission while working on legislative engagement daily. He tries to ensure the troops are completing their military education, as it is one of their obligations as a service member. Knight expresses that there is an increased need for service and that recruiting and retention remain the biggest challenge. Meeting educational requirements is one way to improve retention issues.

“My goal is to maintain a balance of organizational change and strategic view on a national basis to set conditions for the future. I have to make sure the organization sees priorities as I see them,” said Knight.

Knight never stopped striving for success. Striving for improvement, growth and knowledge. He shares a piece of advice that he would recommend to any individual presented with an opportunity,

“Take any opportunity when it comes. It will either build your resume, or it will build relationships. Good will always come from it.”