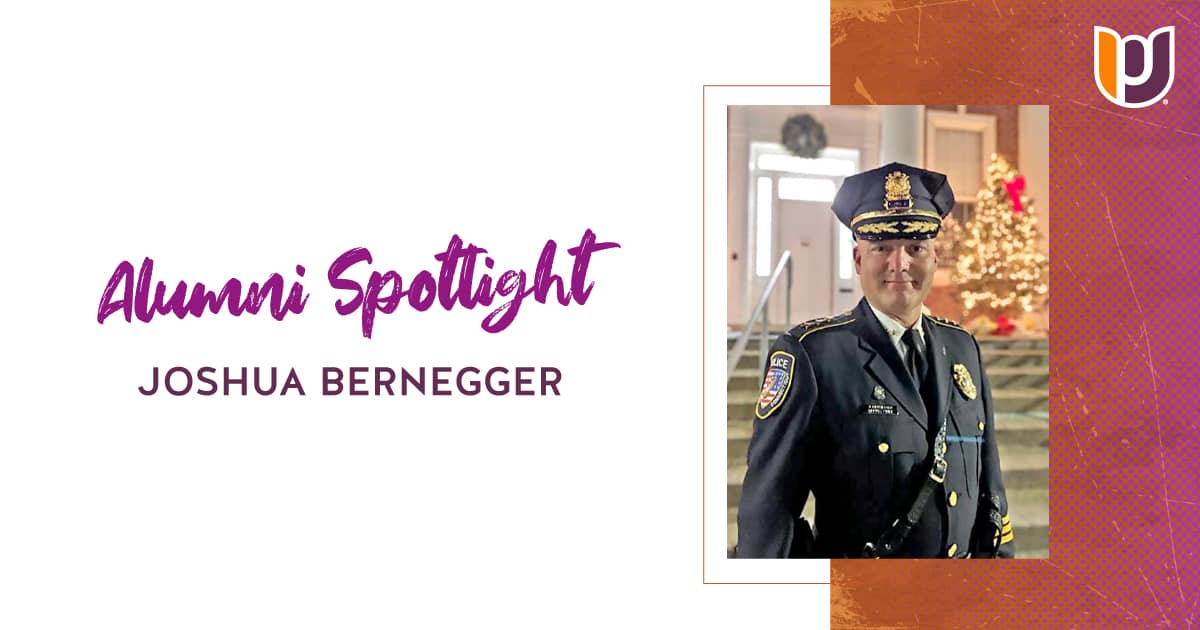 “All cops love catching the bad guys,” says Watertown Chief of Police Joshua Bernegger with a smile on his face.  “But that instant gratification from having saved someone’s life – that is the most rewarding part of this career.”

Proud Post Alumnus Joshua Bernegger completed his Master of Business Administration (MBA) in 2014 with a leadership concentration. Bernegger has served over ten years in executive-level law enforcement and was recently named the Chief of Police of the Watertown Police Department on January 4, 2021.

Bernegger had always wanted to pursue a master’s degree but had difficulty accommodating his busy schedule to make the time. The opportunity to earn his degree online at Post University was the driving force that led Bernegger to enroll in 2011. While there was an initial toss-up between obtaining his MBA or his MPA (Master of Public Administration), Bernegger opted for the MBA, feeling as though the more versatile degree may beget additional opportunities later in his career path.

Enjoying his career endeavors in law enforcement leading into 2011, Bernegger knew that to continue aspiring moving up in rank, a master’s degree was a must.

“The course work required for the leadership concentration really caused me to take a long look in the mirror to understand how I was being perceived,” said Bernegger. “I became a much stronger, reflective leader as a result of my degree at Post.”

Bernegger discusses the value and importance for any current or aspiring leader to acquire additional leadership skills through education.

“I attribute my leadership abilities to the course work at Post. It was far more difficult than I thought it would be but absolutely worth it,” said Bernegger.

There were many courses that enhanced Bernegger’s personal and professional goals as a leader, most noteworthy—his Capstone Project—which focused on a leadership development plan to enhance the effectiveness of the Naugatuck Police Department.

While he was taking these courses, Bernegger was able to internalize his learnings and apply them to his deputy position at the time. His subordinates within the police department completed a 360-degree assessment, which reflected a positive change in the results.

“My weakness has always been dealing with conflict; however, I’ve learned that conflict can be healthy in an organization. It’s about learning to distinguish positive from negative conflict. An organization cannot move forward without positive conflict,” said Bernegger.

As Chief of Police in Watertown, Bernegger’s first project is to obtain a new building for the police force. Since its initial acquisition as the police station, the town has grown and law enforcement has specialized. Bernegger will continue to maintain administrative and operational functions of the department, as well as navigate necessary adaptations as we progress through each phase of the COVID-19 pandemic.