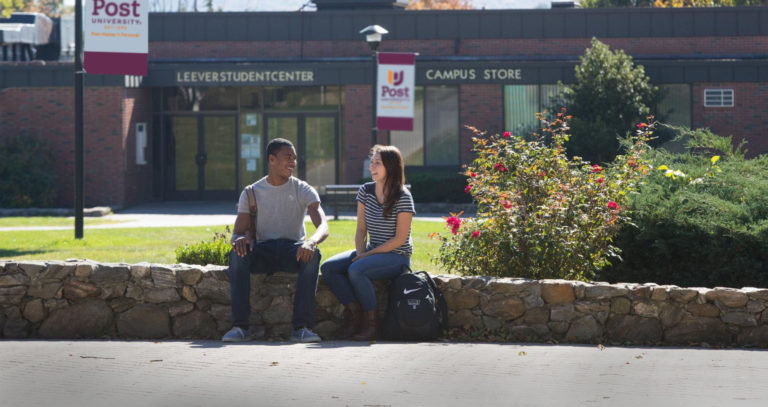 Post, a long-standing private for-profit university in the city, already has partnerships with high schools throughout greater Waterbury and Northwest Connecticut, including Explorations Charter School in Winsted and Sacred Heart High School, an Archdiocese of Hartford-affiliated school in Waterbury.

The university recently announced a new partnership with Workspace Academy, a Bethel-based center that caters to families whose children are home-schooled to allow students to take college level courses online or at Post’s campus on Country Club Road.

Through different arrangements with each participating school, students have a chance to take college level courses at a significantly reduced cost, officials said.

“The difference is we are actually using Post associate faculty members to teach the courses, and it is our curriculum,” Agvent said. So, high school students are “actually working at the same level, same rigor as a traditional college student,” she said.

“What we’re seeing with our students graduating with credits is they are getting larger scholarships from their accepting institutions,” Agvent said.

Furthermore, depending on how ambitious students are, they could graduate from high school with enough credits to earn an associates degree from Post to go along with their high school diplomas.

Agvent said so far four students have completed associates degrees through the academy. The coursework, she said, demonstrates students are ready for a four-year college.

Benjamin Eveland, a 16-year-old Explorations junior from Watertown, was finishing up his second and third online classes through Post at the time he was interviewed. Those classes were Introduction to Computing and College Success. Eveland was gearing up to enroll in his fourth college class, Introduction to Communications, which was to begin this week.

Eveland said he signed up for the program after a Post representative gave a presentation on it, because getting a head start on his college education “for a good price while still in high school sounded like a really great opportunity,” he said.

Eveland said he hopes to use his accumulated credits toward a degree in data science.

“There are a lot of things you can do with that,” he said, listing possible careers like statistical analysis and programming.

His mother, Lezlie Eveland, said she and her husband struck a deal with their children that they would help them pay for college through high school. After that their children would be responsible for financing their educations.

“My husband and myself, we both paid for our college degrees,” she said, noting they had paid off their student loans over a 10-year period. The couple believed their children would be more seriously invested in college if they saw it as a choice and a financial investment, Lezlie Eveland said.

So taking college courses through Post is “a very economically sound decision” for Benjamin, she said. “And an amazing opportunity. My son recognizes since we will pay for things in high school get can two years off his belt.”

Explorations Executive Director and Principal Jill Johnson said so far the program has started out small at the school with six student participating in grades 10, 11 and 12.

Johnson said through various funds the school had available it was able to offer rebates to students who maintained at least a B average on their college classes, allowing them to offer courses at $500 per course.

The rebate, she said, was “definitely an incentive” for students to do well in their college courses.

“The important thing is even though I’m at Sacred Heart, this is a Post University course. It is not taught at the high school level,” Dawson said, explaining high school students are expected to meet all the same requirements expected of traditional Post students.

Dawson said he will begin teaching a third course on college and career readiness this fall.

Meanwhile, at Explorations, Johnson explained that educators there recognize not every student will go to college after graduating from high school. So educators and students begin to have conversations about students’ post-high school ambitions begin early on.

“We start talking to students about all post-secondary options – from college, to trade school programs, the military, the job market,” she said. While not every student at Explorations will go on to college, Johnson said they will leave high school with a full resume.