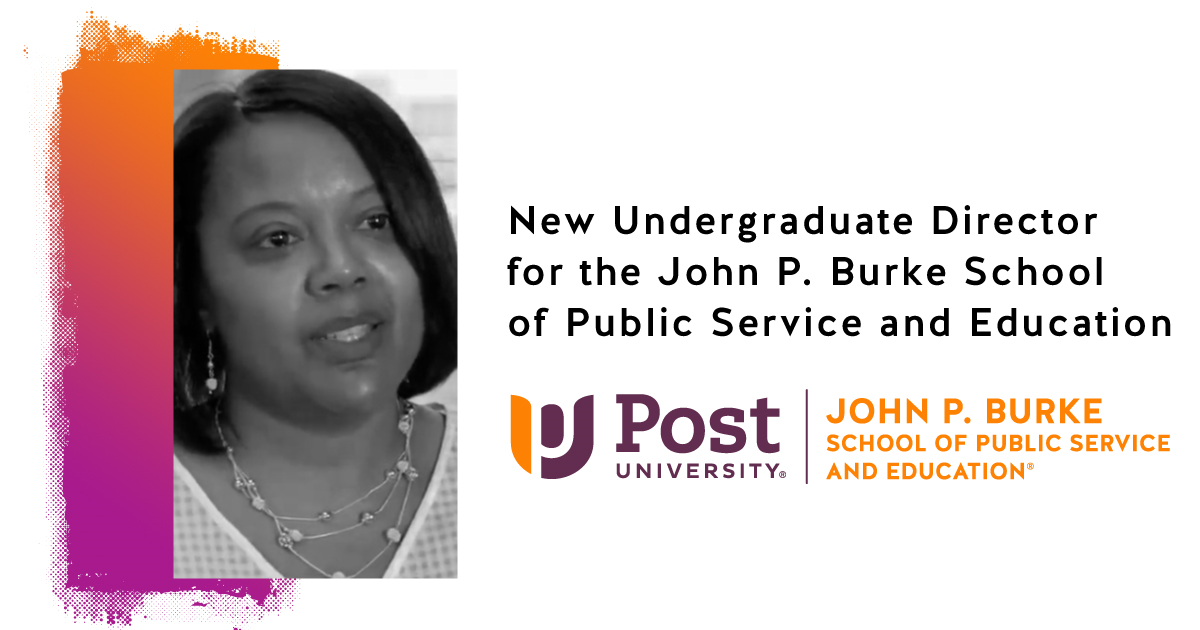 Dean James Whitley, J.D., recently announced the appointment of Criminal Justice Program Chair Sandra Wilson, J.D., to the role of Director of Undergraduate Programs for the John P. Burke School of Public Service and Education.  Wilson, an accomplished academic and former attorney, will maintain her position as program chair while also providing leadership and oversight for the undergraduate certificates, degrees, and minors within the School.  She assumed her new role at the start of the Spring semester.

In his announcement, Whitley praised the experience Wilson brings to the position, having been with the University for more than a decade.

“Sandra’s 14 years of experience and leadership at Post will surely be an asset as she supports and oversees all of the six undergraduate degree programs offered in the Burke School,” he wrote in an email to the community.

Wilson, whose approach is a mix of collaboration, creativity, and strategic vision, is excited to partner with the School’s program chairs to enhance the already strong academic programs offered.  This is something she is particularly excited about, having established already strong working relationships with the faculty.

“My new responsibilities are to think broadly, so I’m not just thinking about one program,” she said.  “I need to be mindful of all of the Undergraduate programs … and what I can do to see them grow and be their best and I love that.”

A Bridgeport native, Wilson always knew that education would play a role in her career. After finishing her undergraduate degree in political science at Albertus Magnus College, she moved to Philadelphia to complete a paralegal certificate.

“I wanted to go to law school, but thought it was too much of a financial burden for both myself and my family,” Wilson said.

Returning to Connecticut, she worked as a substitute teacher for a time which led her to pursue her master’s degree in education from the University of Bridgeport.  Little did she know that this is where her journey to Post would begin.

“I met the love of my life there,” she recounted.  “He ended up moving to Boston and I was getting ready to go to law school.  I ended up going to New England Law up in Boston.”

After graduating with her juris doctorate degree, Wilson served as a litigator for a law firm in Boston, but never lost her passion for teaching.  Moving back to Connecticut with her now husband, who is an alumnus of Post University, Wilson reconnected with one of his professors, Margaret Sheehan, professor emeritus of English.

“She ended up being a phenomenal mentor to me,” Wilson said.  “She asked me if I would be interested in teaching African American Literature.  And I said yes!”

During her early years with Post, Wilson served as an adjunct faculty member, instructing courses in law for another mentor, the late Peter Chepya, J.D., former program chair and director of Legal Studies.  In late-2007, a full-time position as Program Chair for Criminal Justice opened, she applied and interviewed, and the rest is history.

In addition to her roles as Program Chair and, now Undergraduate Director, Wilson has enjoyed being a part of the entire student experience.  She serves as advisor for several student organizations, most notably the Black Student Union, as well as Head Coach for the Cheerleading Team.  It is through these experiences that she has developed holistic relationships with students, which is one of the primary goals she has in her new position.  She hopes to look back on this experience having solidified her relationship with faculty and students.

“The one accomplishment I would be most proud of would be still maintaining that respect and that rapport with not only my colleagues and my students, but all students,” Wilson said.  “That’s the cornerstone to success; is really being relatable and personable and having those relationships.”