A Short History of Veterans Day 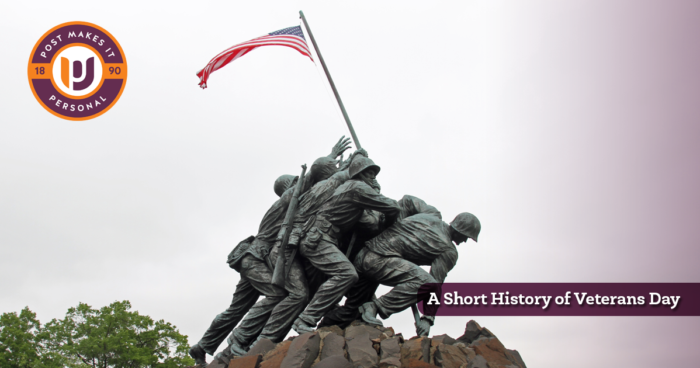 The Historical Significance and Contemporary Value

If you or a loved one has ever served in our nation’s military, you know that November 11 is far more than just a day off of work or school. Veterans Day, the nationally recognized holiday often confused with Memorial Day, pays tribute to all who have served in America’s Armed Forces.

Although Memorial Day also commemorates the sacrifices of our country’s service members, it is a much older holiday established in 1868 and celebrated on the last Monday in May. It pays special tribute to those who have given the ultimate sacrifice for their country, commemorating military members who have died while serving. Veteran’s Day has a different significance.

Download your Military Service Member’s Guide to learn everything you need to
know about earning a college degree online.

The Short History of Veterans Day

Originally called “Armistice Day,” Veterans Day was intended to serve as a time that would remind nations to always strive for peaceful relationships. Over the decades, the date took on new significance as more worldwide conflicts erupted into war. The twists and turns in the holiday’s history include: 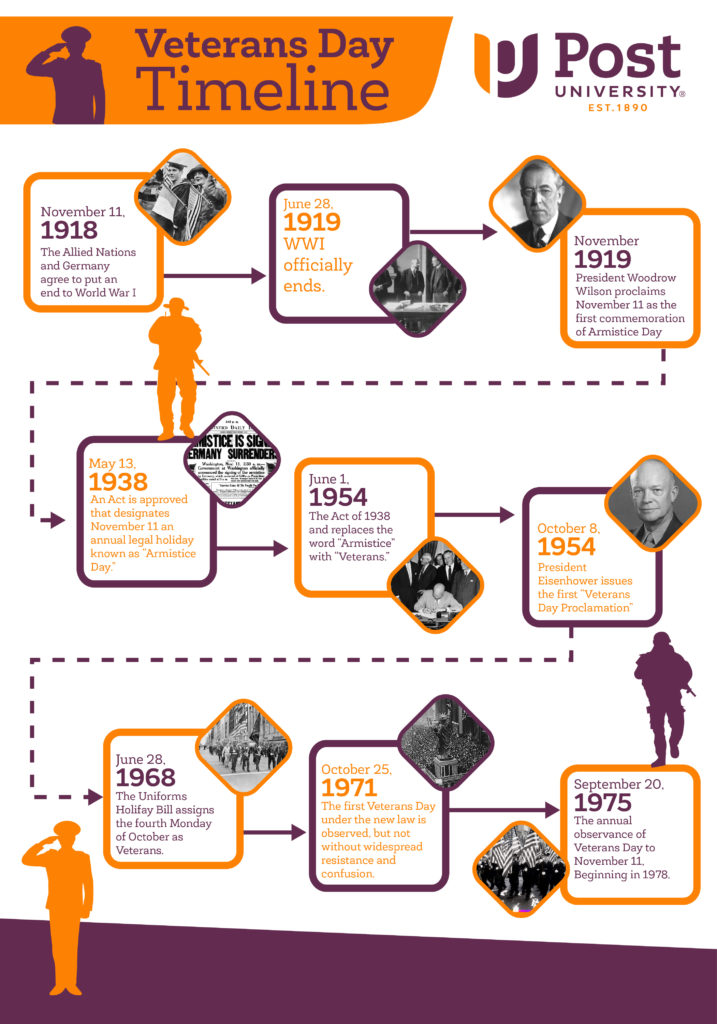 June 28, 1919 – WWI officially ends with the signing of the Treaty of Versailles in France.

November 1919 – President Woodrow Wilson proclaims November 11 as the first commemoration of Armistice Day. Celebrations include parades and public gatherings as well as a brief cessation of business activities beginning at 11:00 a.m.

May 13, 1938 – An Act is approved in the United States that designates November 11 an annual legal holiday known as “Armistice Day.” At this time, the day is intended to honor World War I veterans.

June 1, 1954 – In the aftermath of World War II and the Korean War, the 83rd Congress amends the Act of 1938 and replaces the word “Armistice” with “Veterans.” This allows November 11 to honor all veterans. President Dwight D. Eisenhower signs the legislation.

June 28, 1968 – The Uniforms Holiday Bill assigns the fourth Monday of October as Veterans Day to make it one of four three-day weekends for federal employees. Many states disapprove and continue to celebrate the holiday on November 11.

October 25, 1971 – The first Veterans Day under the new law is observed, but not without widespread resistance and confusion.

If November 11 falls on a Saturday or Sunday, we celebrate the holiday on the previous Friday or Monday. This policy honors the intentions of the Uniforms Holiday Bill while also respecting Americans who feel strongly about the holiday’s significance.

The Veterans Day National Ceremony commences precisely at 11:00 a.m. every November 11th at Arlington National Cemetery. A wreath is laid at the Tomb of the Unknowns, and celebrations continue inside the Memorial Amphitheater to thank and honor all who have served in the United States Armed Forces.

Veterans Day holds great historical and patriotic value for many in our country, and by marking the date annually, we reinforce our national values of duty, honor, selflessness, civic responsibility, and passion for our country.