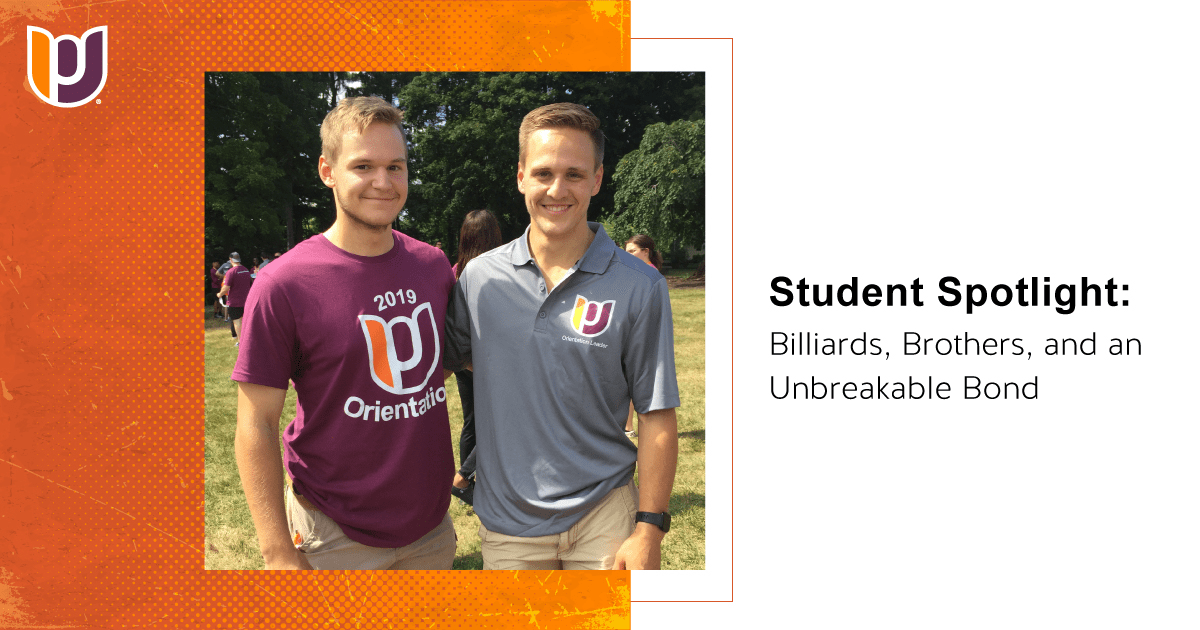 Billiards, Brothers, and an Unbreakable Bond

When you first meet the Mazako brothers, right away you can tell the genuine kinship and natural affection they share for one another.  Growing up in nearby Oxford, a small, family-oriented town, Junior Honors Accounting, and Finance double major, Nolan, and his younger brother, Freshman Criminal Justice major, Evan, credit their mother and grandparents for their closeness.

With both of their parents working full-time, three days a week after school, the brothers would “live” at their grandparents’ house.  This laid the foundation for the special bond they share to this day.  “We were never around too much technology,” Evan said.  “So we were able to bond over actually talking to each other.” 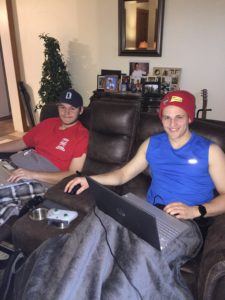 “Half our raising was under the grandparent mindset,” Nolan continued –finishing Evan’s thoughts.  “They had a better outlook on what you should be when you grow up.  So they really taught us how to carry ourselves.”

Their “brotherly love,” however, wasn’t solidified until Evan was in sixth grade.  “We became close when I was in eighth grade and he was in sixth grade.  He really struggled going to school,” Nolan said.  “Yeah,” Evan chuckled.  “Our mom would be like, ‘OK Nolan, go get Evan out of bed,’” Nolan continued.  It was a time in Evan’s life where he didn’t like going to school.  But that didn’t stop Nolan from dragging his brother out of bed.  This daily ritual was the catalyst that led to the relationship they have today.

“Even though I’m younger, we’re still equally protective of each other,” Evan said with a grin.  “That created a bond because I was scared to go to school for such a long period of time.”  Nolan’s persistence helped Evan overcome this challenging period in his life, giving him the confidence to go to a different high school than his brother.

Nolan, whose robust resume includes student leadership, athletic, and academic accomplishments, came to Post partly because he received the University’s prestigious Malcolm Baldrige Scholarship.  The first-ever recipient of the four-year, full-tuition scholarship, Nolan saw the multitude of opportunities available to him, including the tax internship he is completing at blumshapiro, a respected regional business advisory firm, this semester.

While Evan admitted that there was a level of comfort in having his big brother on campus when he finally settled on attending Post, it wasn’t the deciding factor.  Instead, he saw all that Nolan had accomplished and knew he would have the same opportunities.

“When it was [Evan’s] turn to pick a college, our mom came up and was like ‘would you be happy or mad; how would you feel if he came to the same college?’,” Nolan recounted.  “I said I would love it if he was here.”  But he didn’t want his brother to make the decision because of him.  “I wanted him to make the decision because of his future,” he continued.

Evan agreed.  “In my first semester we purposely didn’t tell anybody we were siblings just because of the fact that he wanted to give me a chance to be my own person,” he said.  It gave Evan the opportunity to develop his own identity on campus.

Even though their busy schedules include a full course load, practices and games for the Division II teams they play on (Nolan, Track and Field; Evan, Baseball), and involvement in a number of clubs, you may occasionally catch them in the Eagles Nest, shooting a round of pool – their competitive sides on full display.  It’s billiards that keep them connected; a chance for them to grow their already strong relationship through an activity they both enjoy. 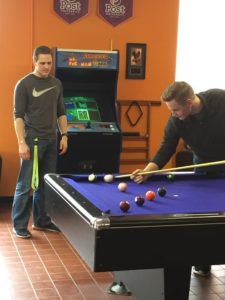 “I enjoy shooting pool because it gives me a break from the responsibilities of the day,” Nolan shared. “While at college, students have to focus on being committed to so many different responsibilities […] [they] can sometimes forget to simply enjoy their time at college, and I am happy to be able to spend that time with my best friend.”

While they appreciate different qualities in each other, Nolan looks up to Evan, both literally and figuratively.  He admires that his younger brother has been able to continue pursuing his passions – one of which is playing baseball.  “He’s able to be successful being his own person,” Nolan said.  When asked what he admires in Nolan, Evan said that his older brother seems to

find time to do it all.

“Though, I wish he would get more sleep,” he said.  Nolan laughed, imparting a few of his own words of wisdom.

“Yeah.  I would tell [Evan] to get enough sleep,” Nolan urged.  “That and I would tell him to be prepared.  Look four, five years down the road and make decisions now based on that.”