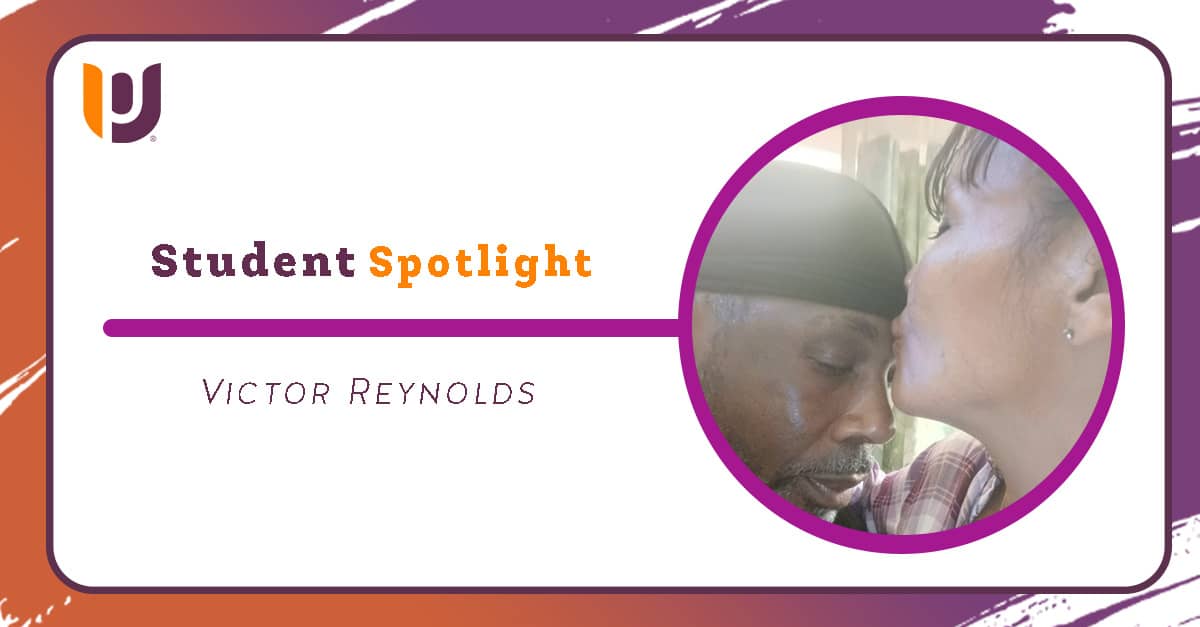 Every day is a gift. That’s why it’s called the present.  For Victor Reynolds of Torrington, he appreciates each day and the gift from a stranger, whose name he probably will never know.  The gift of life.

Reynolds, 56, was the recipient of a heart transplant.  He received this gift on October 13 at Yale New Haven Hospital. Reynolds is an online student at Post University studying criminal justice in the John P. Burke School of Public Service and Education.

In December of 2019, Reynolds was diagnosed with heart failure. In 2020, his cardiac surgeons successfully implanted a left ventricular assist device, or LVAD, to help his weakened heart pump blood to his arteries.  In an interview, Reynolds, recalled when his doctor, in late August — the start of the academic year— told him that there was a blood clot near his heart after reading his CT scan. His doctor took quick action, admitting him into the hospital. For a second chance at life, a heart transplant was the lifesaving option for Reynolds. On October 12, he got the word from his doctor that a donor organ was available.

Reynolds, who married on June 3 of this year, credits his wife Carmen Reynolds, their family as well as the Post faculty and students for being by his side while he waited for an organ and underwent a 14-hour surgery on October 13.

It was his sister Dawn Reynolds Wright, who introduced him to Post University.  “She knows about my passion for helping people, especially at-risk youth and the homeless,“ Reynolds explained, “We were at her house one night talking. ‘She said, why not switch majors and come to Post and take up criminal justice. You are made for it.’ My sister was right.  I’ve been thriving since then.”

Thriving indeed. Reynolds, with a GPA of 3.88 is involved with the University beyond his schoolwork.  He is a member of the online honors program, serves as a senator in the Online Student Government Association, and is a vice president of the Online Emergency Management & Homeland (EMH) Club.  “The faculty has always been concerned about my health first,” he said.

Beyond his professors, Reynolds is grateful to the support from University’s Disability Coordinator Jennifer Labate and Assistant Director of the Online Honors Program Caitlin Grant. They have all stuck by me,” expressed Reynolds.  Feels like I have had all the online students praying for me. Some have event sent cards.  I certainly felt grateful.”

Reynolds praised his Burke School classmates Jackie Pulley and Marissa Daly for getting him involved in the University activities. “Both Jackie and Marissa are big believers in me,” said Reynolds.

Pulley, who is set to graduate this December, tapped Reynolds to fill her seat on the online student government association as the chair of the Burke School committee. “Victor is an amazing person and a great friend, who shares my dreams regarding the public service education committee and the club,” said Pulley.

At a recent meeting of the online EMH Club, the conversation focused on what could they could do for the community. Reynolds, participating in the meeting from his hospital bed, said that he was going to donate $50 to the St Vincent DePaul Homeless Shelter in Waterbury. Club members quickly matched his gift, including Program Chair and Club Faculty Advisor David Jannetty. More than $250 dollars was quickly collected which enabling the Club to purchase soap, shampoo, toothbrushes, toothpaste, towels as well as some food items from the local Walmart.  Professor Jannetty delivered the donation to the Shelter on October 24.

“Victor’s energy is infectious. He’s an inspiration to others to do the same,” said Jannetty. “He’s recovering from major surgery and he’s thinking of others.”

When he completes his bachelor’s degree, Reynolds will focus in the area of juvenile justice and help at risk youth.  For the time being, Reynolds will be spend a few more weeks recovering at Yale. He will then go home and wait for the all clear to go back to school, hopefully in the New Year.