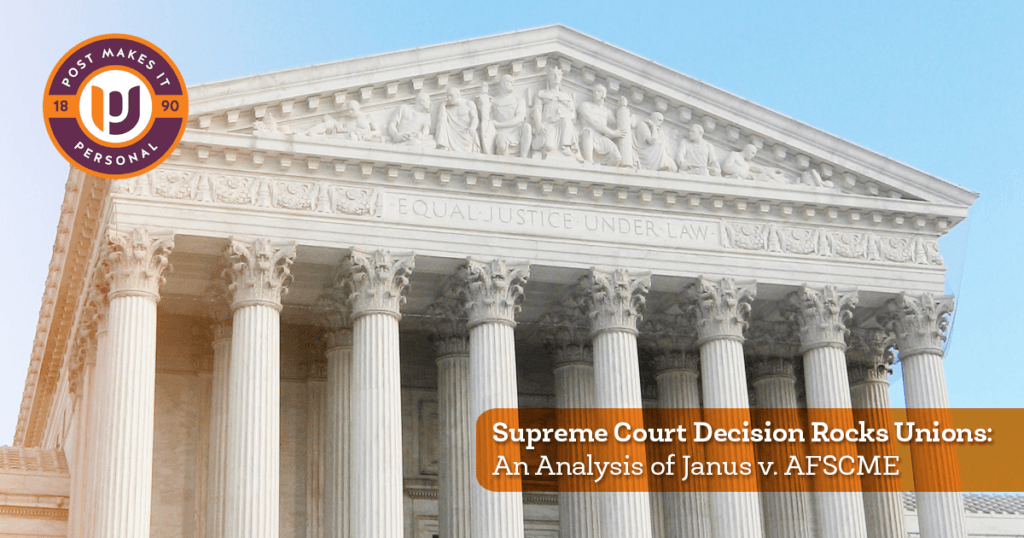 On June 27, 2018, the United States Supreme Court held that public sector non-union employees could not be forced to pay an agency fee to a union as a condition of employment. The 5-4 decision in Janus v. American Federation of State, County, and Municipal Employees (AFSCME) overturned a 40-year precedent set by the Court in Abood v. Detroit Board of Education.

An agency fee is a payment to a union by a nonunion employee who receives the benefits of collective bargaining. In overturning Abood, the Court held that agency fees represent a “significant impingement on First Amendment rights” because employees are required to provide financial support for a union that “takes many positions during collective bargaining that have powerful political and civic consequences.”

What does the Janus decision mean for public sector unions and employers going forward? For unions, the issue will be how to continue
representing bargaining unit employees with the possibility of declining financial resources and membership. On the other hand, public sector employers need to be careful not to get caught up in advising employees who want to opt out of paying union dues. It is still a prohibitive practice for employers to interfere with or restrict an employee from engaging in union activities.

Although Janus only struck down agency fees in lieu of union dues, the decision has opened the door for dues-paying members to opt-out of union membership, while potentially receiving union benefits for free. In response, some unions have limited opt out opportunities to a specified period of time. However, this approach may conflict with state labor laws that require an employee to authorize, by signature, payroll deductions such as union dues.

According to the U.S. Bureau of Labor Statistics the percent of wage and salary workers who were members of unions in 2017 was 10.7 percent or 14.8 million. The union membership rate of public-sector workers (34.4 percent) is more than five times higher than that of private-sector workers (6.5 percent).

There is little doubt among labor relations professionals that the Janus decision will bring new challenges to public sector collective bargaining for years to come. For the moment, the best course of action is for employers and unions to work cooperatively to find solutions that satisfy the intent of Janus while awaiting further direction from the courts.

James Hutt is a Post University Associate Faculty member and personnel director for the city of Wallingford, CT.