Why is Post University’s Valedictorian Part of the Ground Crew? 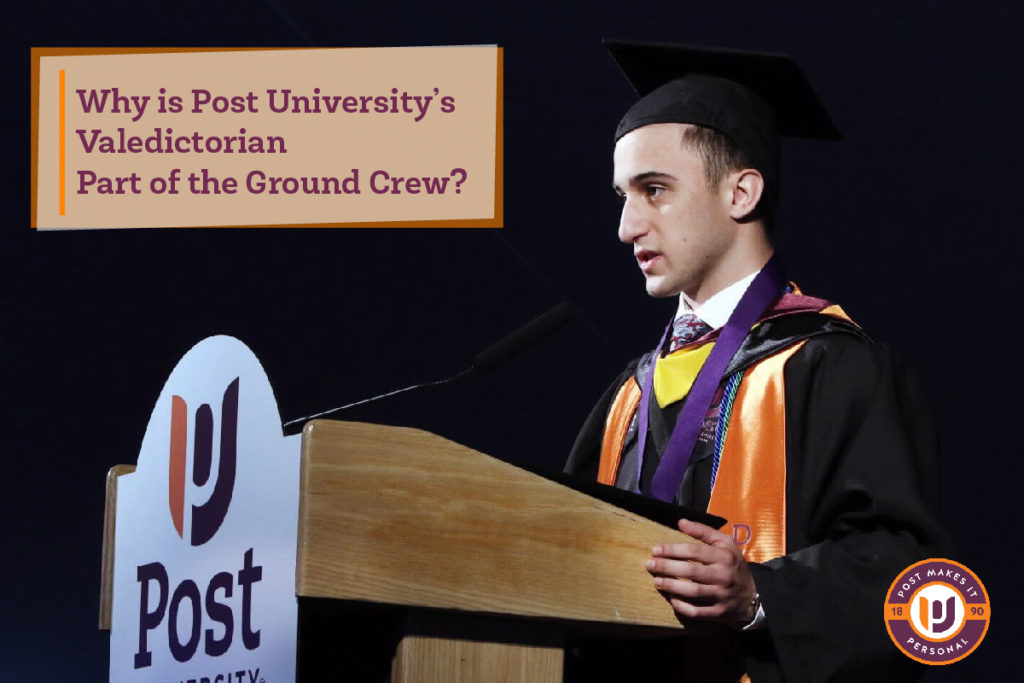 John Gibbons, Post University class of 2018, didn’t start out with the intention of going into accounting. He came to Post thinking that he’d “go to business school and then go to law school,” but instead he ended up graduating valedictorian of his class with an accounting degree.

Gibbons started off his career at Post with a management class taught by Professor Melissa Santos but after a conversation between Gibbons and Santos about switching his major to management, Santos directed Gibbons to Professor Noelle Taddei, a professor of accounting. Shortly after starting the accounting class Gibbons switched his major to accounting and added a double major in finance.

When asked how he would describe his time at Post, Gibbons’ recollection was overwhelmingly positive. Since he is from New Brunswick, Canada, located about ten hours from Post, his experience at Post was also mixed with the experience of living in a different country.

“I came to a new country looking for an adventure,” Gibbons recalls about his initial feelings about Post. “The school looked good and when I was eighteen I knew very little about the US, especially very little about Connecticut and New England.”

Looking back, Gibbons describes his time at Post, especially his time in the school of business as “very valuable” and “very rewarding.”

Initially some of the key things that Gibbons was looking for in a school was the ability to join the golf team and also earn a scholarship.

Gibbons is nearly a scratch golfer (and plays piano).

“I was offered the full academic scholarship and with the spot on the golf team and the full ride I couldn’t say no” said Gibbons, a recipient of the Malcolm Baldrige Scholarship, which provides four years of college tuition for students who are interested in pursuing a career in business.

His process of searching for colleges was slightly different from many other students because he was applying to colleges outside of his home country. Gibbons suggests that students starting the college searching process should tour a wide variety of schools to help the figure out what they like.

He did not have the opportunity to tour very many schools during his search simply because it’s a very long trip between New Brunswick and many schools, but he recognizes the value that it had for his peers who “went to see four, five different schools before they made their decision.” This isn’t something that Gibbons regrets though, since ultimately he enjoyed his time and interactions at Post.

In Gibbons’ eyes, the professors and faculty at Post are what really sets them apart from any other school.

“I would ask people for advice left and right.”

Gibbons stressed the importance of getting involved in activities and utilizing the resources available, such as the professors who can serve as mentors.

“The most common piece of advice that you hear is to get involved. It’s almost said so much that it’s cliché but I think you’ve got to seek advice from people.”

He recalls some of his time with his professors, especially time spent outside of the classroom as something that was really crucial to his success. He feels that the people that he’s met in college have offered him some very valuable advice that he would not have gotten if he had not asked to sit and talk with them.

“I asked people to sit down and have coffee with me a lot when I was in college, professors, people in my internships, people that I met at networking events. I mean you have the perfect excuse of saying, you know, I’m nineteen or I’m twenty, or I’m 21 and I want to know what I want to do with my life and I was wondering if you could give me some advice.”

“Those people should get just as much credit as me” says Gibbons, referring to the people who have helped him along the way. Gibbons credits his success to the people in his life who’ve supported him in his path to becoming valedictorian, graduating college and entering the workforce.

“Joe who I work with, my best friend, all the hours that I spent studying to get the GPA that I had, to get that nomination, Joe was there for most of those hours. My roommates, my teammates, those people have stuck by me when I say ‘you know guys, I can’t come out to a party tonight I’ve got to go study.’ My parents, my grandparents, my mentors that I met in New York or professors here have all given me hundreds of hours, probably thousands of hours, they’ve helped me out. I think that’s missed a lot.” 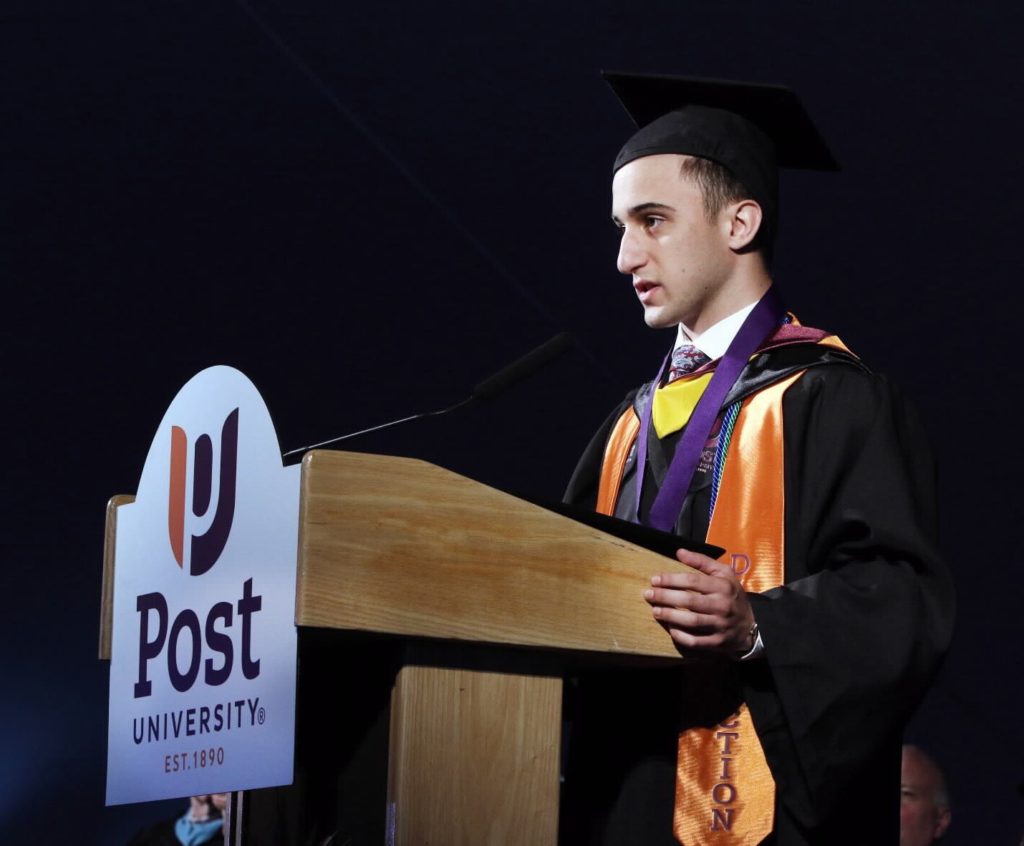 Now Why is the Valedictorian Cutting Grass This Summer?

Gibbons is working with the grounds crew during the day while he studies for his CPA exam at night.

“I study for four, five hours a day. A job with the grounds crew doesn’t take a lot out of you mentally even though it’s physically hard work but physical labor is pretty humbling which is good. I’m doing it with my best friend too so it’s pretty fun to just get up and cut grass.”

In the fall he is going to start working at Ernst & Young, an accounting firm in New York.