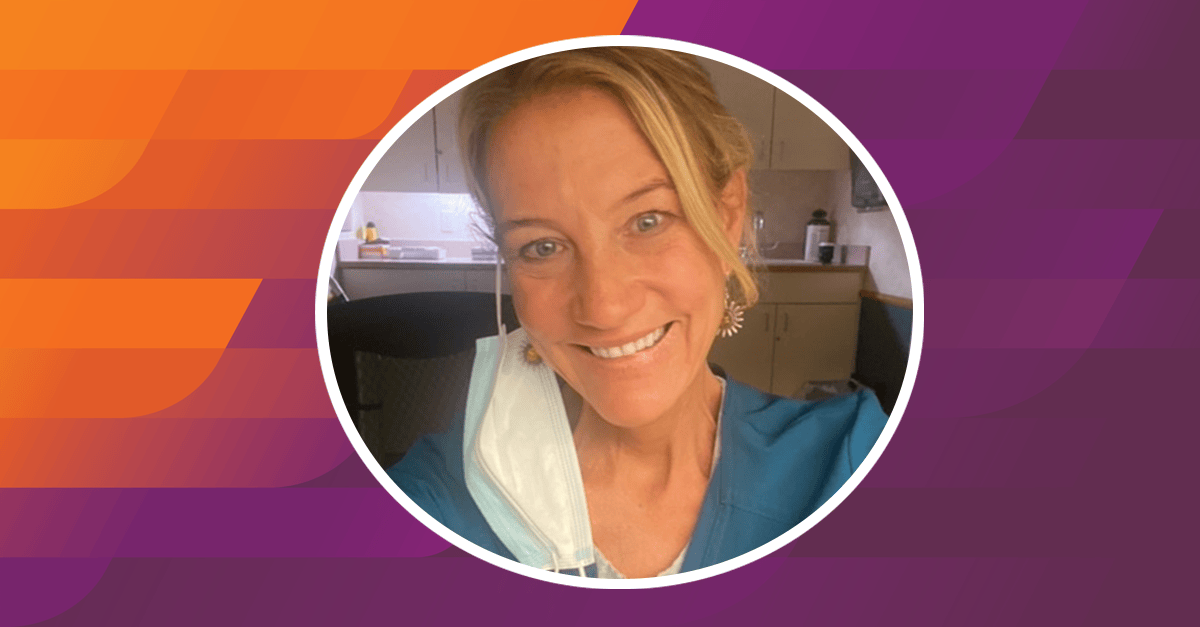 Life circumstances led Mary Alderson to become a nurse after getting married and having a child, but her first love was art.

After two years at Sarah Lawrence College in New York, where she was making plans to become a painter, Mary grew homesick. “I moved back to Montana, where I grew up on a family ranch, and met my husband,” Mary says. The couple moved to Australia, where her husband is from, but living so far from family was difficult for Mary—especially once she became a mother. “When my son was two years old, I called my mom and told her that I wanted to move home,” she says. “She told me she would pay for my plane ticket if I went back to college.”

A Life Change and a Jump into Nursing School

And so began Mary’s second college journey, wherein she enrolled at Sheridan College, which was an hour away from where she grew up. For the years that followed, she and her family split time between Australia and Montana. Mary was encouraged by an advisor to consider nursing for a fulfilling, stable career path. By 2003, Mary had earned an Associate Degree of Nursing.

Gaining a Variety of Clinical Experience

To accommodate her back-and-forth life in Montana and Australia, Mary worked for short periods in a number of settings: a physician family practice, a rehabilitation center, and a women’s health clinic. When she divorced and became a single mother, Mary became a nurse at a reproductive health care clinic in Missoula.

“The more I got into nursing, the more I loved it,” she says. “Nursing is a wonderful career to work around your family schedule. I’ve liked every job I’ve had.” Those jobs included school nursing at a residential treatment center for teens, caregiving for a quadriplegic, and nursing at an addiction recovery center.

In 2015, Mary moved to Sheridan, Wyoming, and took a position at a public health facility doing patient health testing, education and counseling. The Sheridan VA Medical Center, where she had also applied, called her a few months later to invite her for an interview. “Earlier in my career, I’d done some mental health nursing, and I was really interested in working in the VA system,” Mary says. She started in April 2015 as a nurse for the acute psychiatric unit and the mental health outpatient triage office.

Starting the Bachelor of Science in Nursing at Post University

For years, Mary has thought about pursuing a bachelor’s degree. When she shared this goal with a colleague, she learned about the school he was attending: American Sentinel College of Nursing and Health Sciences at Post University. “This is someone I really respect, so, I followed his research and started the Registered Nurse to Bachelor of Science in Nursing (RN to BSN) in 2016,” she says. Earning a BSN, was both a personal and professional goal. “I want this for my own dignity, for growth opportunities in the VA, and mostly because I like learning.”

Along the way, Mary has encountered self-doubt and life challenges, but she never gave up. “I quit my job for a period, but when I returned, I stopped resisting so much,” she says. “Being a student again has been uncomfortable and very hard at times, but it has also built my confidence. I am no longer daunted by technology. I’m resilient. And I’ve learned so much that has made me a better nurse.”

Mary is in her final course in the BSN program. In February 2022, she moved back to the acute psychiatric unit at the Sheridan VA Medical Center after a stint in 2021 at Sheridan Memorial Hospital. “I could see myself working on a more individual basis with patients,” she says of her future goals. “I know that having a BSN will expand my options. American Sentinel has been great, and I feel very thankful.”

For other Associate Degree nurses considering pursuing a BSN (or higher degree), Mary has simple advice. “Sometimes you have to just do and not think too much,” she says. “It’s easy to look at classes and think they’ll be too hard or decide you’re too busy. But returning to college is about putting yourself first. It’s about believing in yourself. I’m so proud of myself. It’s fun to see how far I’ve come.”