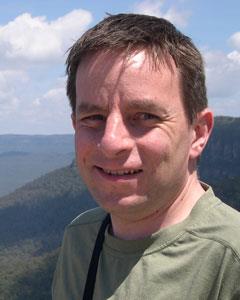 B.S. with Distinction in Cellular and Molecular Biology: University of Michigan, Ann Arbor

Dr. Clyne became the Academic Program Manager for Biology at Post University in 2011. He is responsible for designing the curricula and course material for the biology program, and teaches biology courses including Anatomy and Physiology, Microbiology, Cell Biology, Molecular Biology, Genetics, and Biotechnology.

Previously, Dr. Clyne was an adjunct biology instructor at Post University and guest lecturer for the Physician Assistant Program at the Yale School of Medicine and for the Biology Department at the University of Michigan. During his doctoral training, he taught several semesters as a student instructor for neurobiology, including an advanced laboratory for upper undergraduate and graduate students. He has also participated in teaching workshops and outreach to elementary schools and science museum, which underscores his commitment to science education in an increasingly technological world.

Dr. Clyne was a postdoctoral fellow at Yale School of Medicine. His research helped pioneer the field of optogenetics: the study of neural circuits in behaving animals by genetically engineering cells to respond to light. His work caught the attention of the popular press including the BBC, Scientific American, and NPR.

Dr. Clyne’s goal as an educator is to empower students with analytical and creative approaches to problem-solving that will help them excel in their profession and become life-long learners and innovators. Although facts and techniques can become outdated, critical thinking endures, enabling students to adapt to future challenges.

Dr. Clyne strives to help all students exceed their expectations by engaging them with active learning strategies that emphasize thinking and doing instead of passive listening.

A memorable moment for the young Dr. Clyne was reading Isaac Asimov’s three-volume “Understanding Physics” one summer before high school. Asimov’s lucid prose made science accessible and enticed Dr. Clyne to be a part of it. That spark is what drives Dr. Clyne’s interest in fostering K-12 science education through outreach, mentoring, and teacher education.

Dr. Clyne is also a saxophonist. He was a founding member of the Johnstown Cats swing ensemble, which recorded a CD and an all-analog vinyl record.

Recently, Dr. Clyne devotes most of his free time to human behavioral genetics and early childhood development as he and his wife enjoy watching their twin son and daughter grow up.

Dr. Clyne is interested in the neural and genetic basis of behavior. Understanding behavior at both levels can shed light on the evolution of nervous systems and improve the diagnosis and treatment of neurological disorders.

His graduate work focused on the brain’s molecular transistors: ion channels. His doctoral thesis identified key regulatory sites in a new class of ion channels called P2X receptors, which have been implicated in pain reception, cardiovascular function, and other processes.

He subsequently chose Drosophila melanogaster (a fruit fly) as model system, because the genetic tools are powerful and flies have a small nervous system with a rich behavioral repertoire- flies mate, fight, fly, run, eat, sleep, and learn with a tiny fraction of the neurons in a human eye. One of the best ways to gain insight into the neural and genetic control of these behaviors is to study how they differ between males and females.

Sex-differences can be astounding; in some cases, biologists have misclassified males and females into different species. Environmental, social, and genetic factors all affect these differences, but genetics is the by far the dominant determinant in Drosophila.  The most conspicuous differences are evident during courtship where males sing to females but not vice versa. Why? Can females not sing?

To answer this question, Dr. Clyne genetically engineered neurons to respond to light which allowed him to rapidly probe the function of specific cells in behaving animals with a flick of a light switch. He focused on cells that express a gene called fruitless (fru), a key determinant of male behavior. First, he identified neuronal subsets that allowed him to command males to sing on demand. He then stimulated the corresponding neurons in females and surprisingly discovered that females can also sing, albeit out of tune. This result suggests that the profound differences between male and female behavior derive from sex-specific activation of neural modules in a largely unisex brain. Going forward, the challenge is to track down the neurons that control these modules and further delineate the genetic pathways that result in their sex-specific activation.