5 Questions with Jeremi Bauer: The direction of marketing

1. 2015 budgets have been formed, and 51 percent of B-to-B marketers plan to increase their marketing budgets, up from 32 percent last year, with the average budget increasing by six percent, according to a new report by Forrester Research. Why are we seeing such a jump in the amount of marketers willing to pump up their budgets?

Marketers are pumping up their budgets, because over the last few years (since late 2012) there has been an uptick in the economy.  The housing market is slowly recovering from its lows in 2008 – 2010 which is leading to increased consumer confidence.  Lastly, gasoline has been on a steady decline for the past few months so consumers now have discretionary income that they previously did not.  Marketers know this, and they want access to this discretionary income.  Another thing we’re seeing right now is what is being called “cause marketing” where companies and brands are associating themselves with causes happening around the world.  We saw this several times during Super Bowl XLIX.  Many of the commercials during the game had people wondering what was being marketed until the very end.  Nationwide’s controversial commercial is a great example of this “cause” marketing and its impact.  Two weeks after the Super Bowl, people are still talking and sharing their thoughts about that commercial.  That is brand awareness!  Good or bad, Nationwide now owns a spot right in front of their audience’s minds. 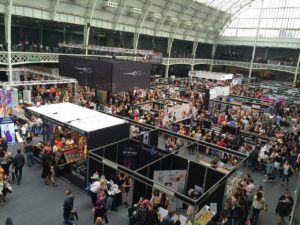 Trade shows are being replaced with other forms of
marketing yielding a higher return on investment.

2.Budget allocations for traditional events, such as trade shows and seminars, is still large, but was decreased more than any other budget item. These traditional events will account for 12 percent of marketing budgets in 2015, down from 20 percent last year. In your opinion, why are marketers moving away from more traditional marketing events?

This really boils down to doing a cost benefit analysis.  Traditional marketing at tradeshows is very expensive, especially for those who have to travel great distances to get there.  Booth spaces are increasing in cost, in addition to air fare, services at the event, supplemental marketing pieces, staffing the event, hotels, car rentals and food and beverage. All of this makes for a very expensive venue where the return on investment (ROI) might be one percent.  There are more efficient means of reaching the same audience that generate a much higher ROI.  While it is true that people buy from people, the internet is making it easier for buyers to gather information and conduct research. Anyone who has attended a trade show knows, they are really about networking, because people buy from people.

3. Digital marketing is the fastest growing area amongst marketers, with the top digital priorities listed as content marketing, social media marketing, brand and website and email marketing. What do you feel are the most important digital channels and/or the top practices, and what are some specific advantages of digital marketing?

There is no question that marketing has gone digital, primarily because it produces a greater ROI than traditional marketing.  That is not to say that the large organization will completely abandon traditional channels like TV, radio, and publications; it’s just that more organizations will use micromarketing to specifically target an ideal consumer and tailor their message to that ideal user.  Micro marketing allows marketers to target customers in an extremely specific fashion.  That is very powerful in terms of generating an ROI on your message.  Following that ideal description, marketers are using social media channels and email to develop content that appeals specifically to that person.  The big social media channels are still Facebook, Twitter, and YouTube, but Instagram is quickly gaining speed for content developers.  The reason is simple; a picture is worth a thousand words, as the old adage goes.  In the past marketers were really focused on product features, advantages, and benefits, and you could see that in their messaging.  With social media occupying such a pervasive space in our everyday lives, these F.A.B’s are less and less relevant to consumers.  That is why marketers are now focusing on “content” marketing.  Content, in the world of marketing, is about HOW information means something to the end user.  This is because, as a marketer, if I can make you feel something I know you are ten times more likely to share my content with your social network.  That is how a marketer’s message becomes viral.  Going viral is the ultimate goal of a marketer’s message, just like the Nationwide commercial I spoke about earlier, because whether it’s good or bad, people are talking about it.  In the end, the specific advantages of digital marketing are (1) an increased ROI, (2) targeting a micro market, and (3) the possibility of going viral.

First, it is important to know what a marketing asset really is, because it is not necessarily referring to the marketing department, although that would be an organizational asset.  A marketing asset deals with an icon, a character, a website, or a value proposition that really resonates with the consumer.  The Geico gecko and ‘Flo’ from Progressive are great examples of marketing assets that work.  These characters can be used in traditional TV, radio, and publications, but they can also make the transition into the digital world.  In the digital space consumers can interact with these characters, which creates a sense of ownership on the part of the consumer.

Nike was really a pioneer in this aspect, even before the internet existed, when they came out with the Air Jordan’s and the flight icon.  While that icon never really made the jump into the digital space, consumers still feel connected with the icon and understand its value proposition.  When we’re talking about the balance of digital and traditional marketing we’re really talking about medium to large organizations who have the budgetary dollars to spend money in TV and radio.  Small businesses, and many medium businesses, are trading TV and radio webinars for YouTube, because they are, in many cases, free when self-produced.  Even if an organization pays a production company to produce a YouTube commercial, the cost is still thousands of dollars, if not tens of thousands of dollars, less expensive than doing so for TV, primarily because they do not have to pay for air time.  The same can be said for webinars in place of radio.  For medium and large businesses, it’s important to balance traditional with digital because it is about brand awareness and product positioning in the mind of the consumer.  Take for example Coke or Pepsi.  Generally speaking, most people know about these two brands, yet they continue to spend millions in TV advertising. Why?  Because consumers have short-term memories and these companies know that.  It deals with a concept known as consumer learning and the idea of the feedback loop.  Marketers use a feedback loop that consists of motivation, cues, response, and reinforcement to continually influence consumer behavior.  Through this feedback loop marketers create a sense of repetition, which increases the strength of the association between the motivating conditioned stimulus and the unconditioned response stimulus, which collectively slows the process of forgetting.  That is why marketers should balance their traditional and digital approaches to their messaging.

5. The importance of data analytics was also stressed in the report, with deeper customer insights viewed as a major area of importance in 2015. How important is it for marketers to have access to real-time data and how much does that impact customer insights?

There is no question as computers get faster at processing information, and organizations get better at collecting and organizing information, that data analytics is here to stay.  Keeping the complicated formulas and background mathematics and programming out of this response, data analytics is just the ability to sift through mounds of information to find nuggets of value that can be turned into extraordinary profits for an organization.  In the past, market research was conducted to glean customer insights that would give an organization or brand a competitive advantage.  The challenge with this method was time.  A market research campaign might take anywhere from a few weeks to a few months to collect and analyze the information, then it would take a few weeks to months to act on that information.

In today’s socially connected world a marketer has access to information almost real-time, or as close to real-time as we can conceivably get without actually being the consumer.  Through means like Google analytics, Facebook analytics, and Twitter and YouTube trolling, marketers can have their proverbial finger on the pulse of a given market segment and take action to capitalize on an emerging trend.  Marketers can also use these analytics to influence a trend in their favor.  Marketers know from the studies of sociology and psychology that every social group has an internal group of influencers that have the ability to dictate what the group does and how they act.  Not by force of any kind but because the group chose to follow these individuals.  Marketers look for these influencers and then try and influence them.  This goes back to micromarketing.  The marketer’s “target” market are those influencers in a given social network and they tailor their message to those individuals.  Marketers know that if their message strikes a chord with those influencers they will convert that message into whatever context is necessary to influence their followers.  That is how the ROI in micromarketing is greater than that of mass marketing. Micromarketing’s strength is exponential as more and more non-targets are influenced by the targets to act.