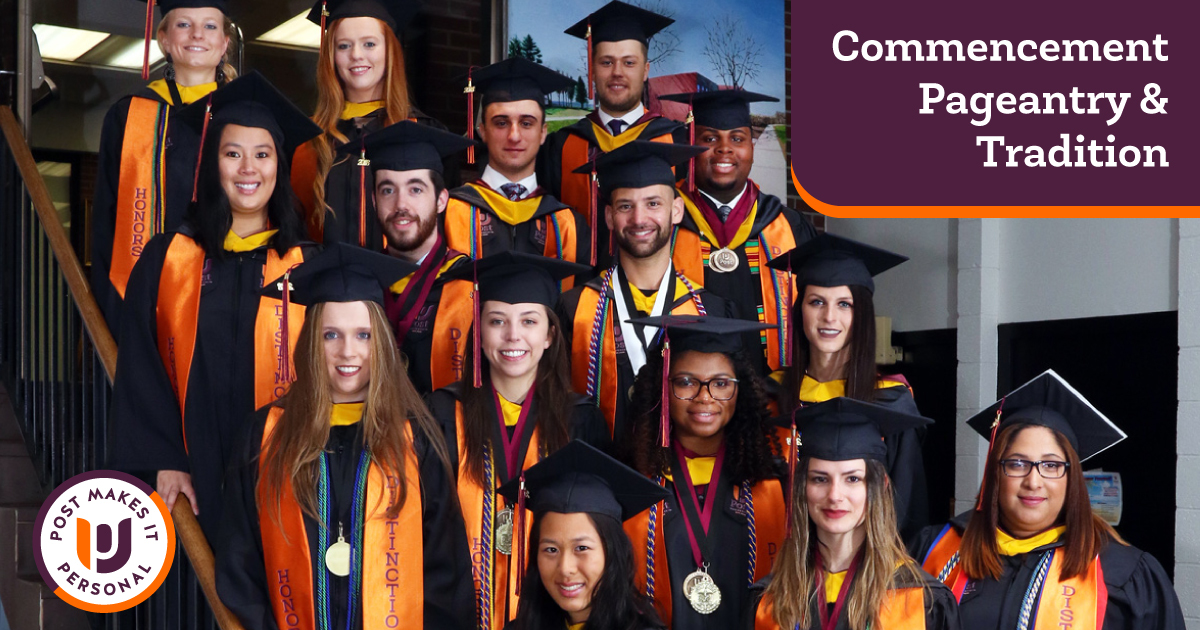 Commencement at Post University is a time of ceremony and pageantry. On May 11, as you watch or take part in the University’s 129th Commencement you will bear witness to the historical oddities and intricacies of academic dress. You may even pause to wonder why faculty is wearing rainbows of color, strange caps and funny looking sleeves on velvet lined gowns. These are good questions, the answers to which are steeped in tradition.

Academic dress, (also known as regalia), primarily consisting of a gown and some type of headpiece, is the traditional form of clothing for academic settings. Its history dates to the medieval universities of Europe, where long gowns were necessary for warmth in the drafty halls of learning.

Faculty and students wear regalia in the colors and styles that represent their highest level of education. Academic gowns are worn with a cap or hood, depending on the degree conferred. Gown styles and how they are worn vary by level of scholarship. For example, the bachelor’s gown has square sleeves and is worn closed whereas the master’s gown sleeve is oblong and the gown may be worn open or closed. Doctor’s gowns are the most elaborate, as befits their status at the highest level of scholarship, and have bell sleeves with three velvet bands and velvet facing on the front of the gown. Similar to master’s gowns, they may be worn open or closed.

At Post University, caps (mortar boards) are worn by undergraduate and graduate students. Mortar boards are thought to have originated in the Middle Ages when master craftsmen building Europe’s great cathedrals would mix mortar on similarly shaped boards. The shape became associated with someone who had mastered the knowledge and skills necessary for his trade. Hoods are worn by graduate students and faculty. In both cases, they are no longer worn as headpieces, but are dropped onto the shoulders.

The hood’s coloring and size represents the type and subject of degree earned, as well as the institution from which it was awarded. The outside of the hood, also known as the shell, is always black. However, the interior lining displays the colors of the institution from which the degree is received and if more than one color is used, they are usually in the pattern of chevrons.

Post University hoods are lined in purple and orange. The hood’s outer edge is trimmed in velvet, usually in the prescribed color of the academic area. The colors used to symbolize areas of study trace their history to the Middle Ages when color and costume conveyed to the mostly illiterate populace visual messages about rank and occupation. In addition to gowns, mortar boards, and hoods, other items such as honor cords are worn to represent various academic achievements or honors.

As you watch faculty enter, you will see an array of lining and velvet colors, with some of the most prevalent velvet colors being, white (liberal arts), purple (law), light blue (education), gold (science), dark blue (philosophy), and drab (accounting and business).Our public administration graduates proudly wear peacock blue.

Now that you know what the faculty is wearing and why, enjoy the pageantry and tradition. It’s all part of the big day.