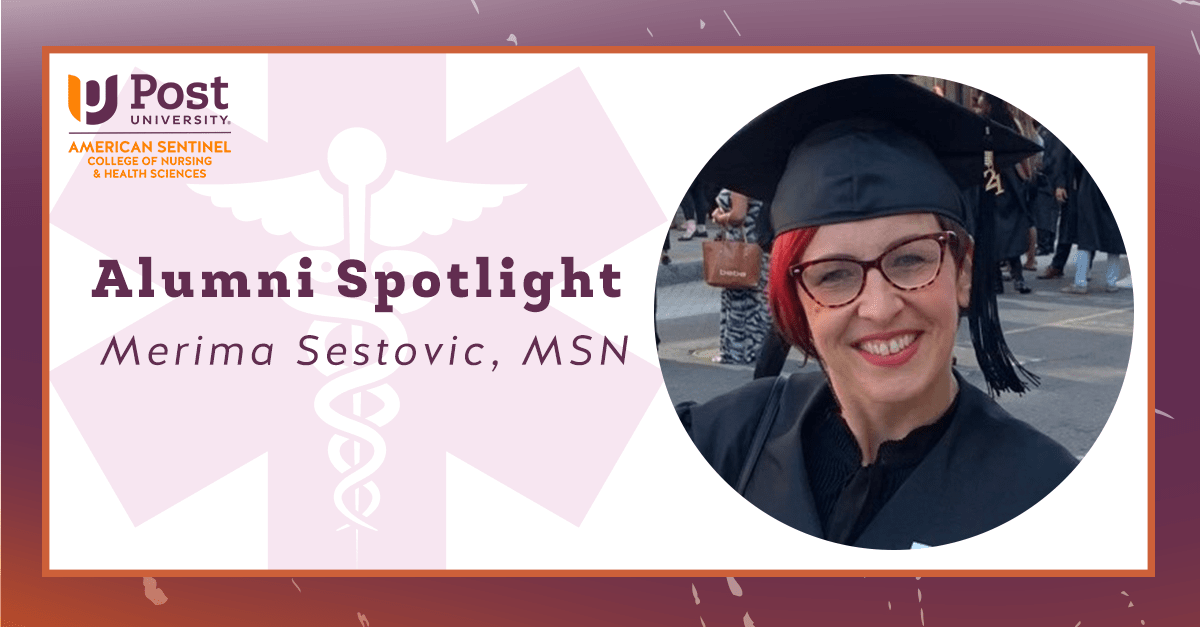 During her final year of high school in her home country of Yugoslavia, Merima Sestovic’s family fled the city where she grew up. After four months in a refugee camp in Croatia, she moved to the United States in 1993, landing in Portland, Oregon, where her mother had lived since Merima was nine years old.

“In Yugoslavia, my high school program was sort of like trade school for nursing and medicine, and I did a residency with a hospital while finishing school,” says Merima. Because of her training, she was able to start working as a nursing assistant in Portland to gain experience. A year and a half later, she moved to Connecticut, where her father and stepmother had immigrated, and enrolled in nursing school at Southern Connecticut University. She graduated with the BSN in 1999.

A Start in Cardiac Nursing

After nursing school, Merima joined the VA Hospital in West Haven as a cardiac nurse. She was the infection control liaison as well. But after moving to nearby Stamford, Merima joined Stamford Health in 2001 as a float nurse. Two years into her career there, she moved into nurse education and held the role for five years.

In 2008, the infectious disease and epidemiology program director asked Merima to create educational pamphlets for Stamford Health’s nursing staff. “He really liked the work that I did and when one of the infection preventionists retired, he invited me to consider that position,” she recalls. Merima applied for and got the job and never looked back. “I love a challenge and I really got into it. My father is a microbiologist, so it gave us a lot to talk about. The role continued to evolve and I was able to continue educating our staff, which is something I love to do.”

The MSN: A Start, a Pause, and a Restart

After settling into her new infection prevention position at Stamford Health, Merima decided to return to school for an MSN. She did so at a local university, but became pregnant with her first child during the first semester. “It was too much to work and be a new mother and a student, so I had to put my education on pause for a while,” says Merima. A second child came six years later.

But in 2018, the idea of advanced education was back on her mind, with her boss approaching retirement. “I knew she was succession planning and I was in line for the role, but I needed to have a master’s degree,” Merima says. She started looking at Master of Public Health programs but came across American Sentinel’s MSN Infection Prevention and Control at the Association for Professionals in Infection Control and Epidemiology (APIC) conference. “It was exactly what I was looking for—I loved the courses and the focus. It was an easy decision because there aren’t a lot of programs like this out there.”

Graduated in May 2021…and a Promotion Soon Thereafter

Merima graduated from American Sentinel in May 2021. Earning the MSN Infection Prevention and Control was an endeavor well worth her while, she says. Her goal now is to continue her leadership work—and become an APIC Fellow, highest recognition of achievement for infection preventionists. “I’d love to do some publishing and research, and do whatever I can to become an expert in my field,” Merima says.

In July 2021, Merima became the manager of infection prevention at Stamford Health. “I know that getting the MSN was important for me in getting this position, even if I was next in line for the job,” she says. “I would definitely recommend this program; it’s been fantastic.”