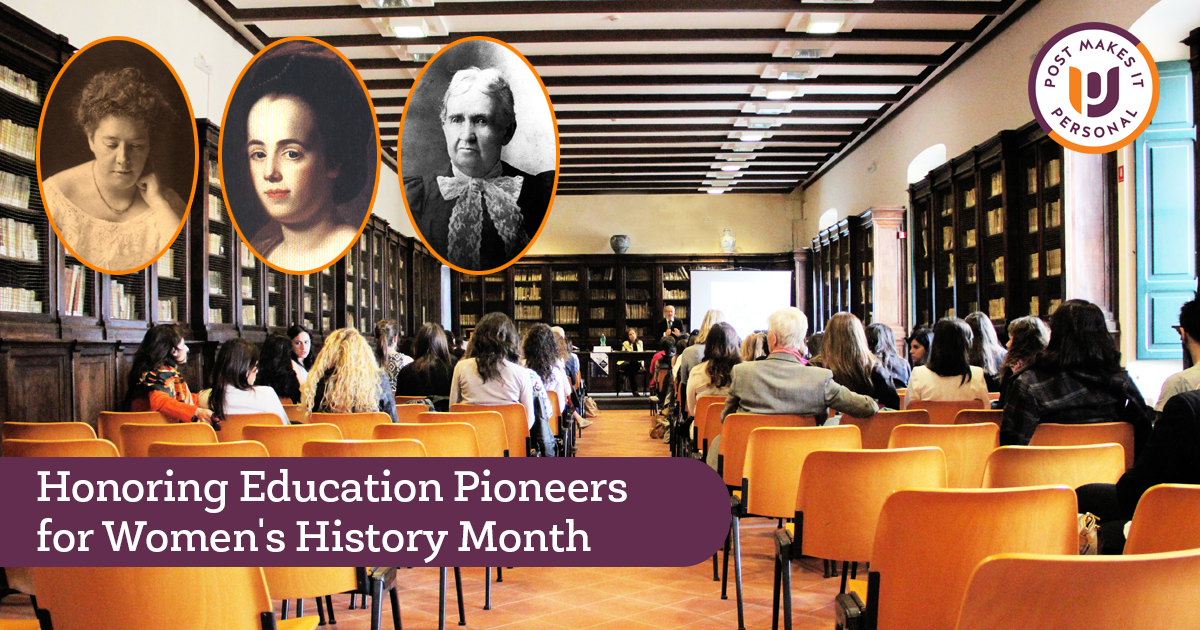 March is Women’s History Month, an annual celebration that showcases the vital role of women in American history and contemporary society. We thought it was a perfect reason to recognize the great contributions that women have made to our nation’s education field.

Most of us in contemporary society take for granted women’s access to higher education. In fact, the National Center for Education Statistics (NCES) reports “females were expected to account for the majority of college and university students in fall 2018: about 11.2 million females will attend in fall 2018, compared with 8.7 million males.”

The statistics for graduate school are equally as impressive:

These numbers may not surprise any of us alive today, but they would certainly delight some of the earliest education pioneers from the 19th century. Let’s look at some notable women who left their very distinguished marks on the American education system.

Murray (1751-1820) was an essayist and a staunch advocate for women’s rights, including improved educational opportunities for women. She was also a playwright and a poet.

Murray argued that the success of the new American nation “required intelligent and virtuous citizens—and since the education of patriotic sons (future voters) rested with mothers, women should be educated,” according to the National Women’s History Museum (NWHM). Contrary to the prevailing notions that the female brain was inherently inferior, Murray “argued instead that women were stifled not by physical limitations but by lack of access to education.”

Murray educated her daughter at home until she was old enough to attend an academy while keeping the family financially afloat with her writing. NWHM reports, “In 1798 Murray published ‘The Gleaner’s’ collected columns. To ensure a profit, she recruited 800 presale ‘subscribers,’ along with endorsements from President Washington and Vice President John Adams.”

In 1802, with help from her cousin, Judith Sargent Murray, Judith Saunders and friend Clementine Beach opened a female academy in Dorchester, Massachusetts. Murray placed advertisements, helped the women to secure the property in 1803, and recruited students for the Saunders and Beach Academy.

The census of 1810 shows 40 people were then residing in the nineoom house: one young male, 36 young females, and three adult women. While from 1822 to 1824 Saunders and Beach conducted their school at other locations, they returned to their house in Dorchester in May 1825 and continued teaching until at least 1834.

The first woman to get her college diploma was Catherine Elizabeth Benson Brewer. She received it on July 16, 1840, at the Georgia Female College (now Wesleyan College.) The Georgia Female College was chartered in 1836 and received its first students in 1839, with Elizabeth Benson signing up on opening day, according to Kelsey Gibbons of the University of Washington.

Benson became one of 20 girls in the junior class (since they had received schooling elsewhere for two years), 11 of whom graduated the next year. Gibbons asks, “So why was Catherine first? Catherine was the first in line alphabetically, which is why she became the first woman ever to receive a baccalaureate degree.”

Born into slavery in Raleigh, North Carolina in 1840, Mary Jane Patterson is largely recognized as the first African-American woman in the United States to graduate from an established four-year college. This daughter of fugitive slaves graduated from Oberlin College in 1862 and went on to have an illustrious career as an educator.

Biography reports: “In 1835, Oberlin College admitted its first black student and two years later became the country’s first coed institution of higher education. It was also the first college in the country to grant undergraduate degrees to women. These changes paved the way for Mary Jane Patterson, who studied for a year in the college’s Preparatory Department. There were still only a few black students enrolled at the college during her four years leading to her graduation in 1862.”

Born in Paia, Hawaii Territory, in 1927, Mink was the first woman of color elected to Congress. While she advocated many women’s issues in Congress, one of her great legislative triumphs “was the Women’s Educational Equity Act, passed as part of a comprehensive education bill in 1974. It provided $30 million a year in educational funds for programs to promote gender equity in schools, to increase educational and job opportunities for women, and to excise gender stereotypes from textbooks and school curricula,” according to her U.S. House of Representatives biography.

In partnership with Senator Birch Bayh of Indiana and Representative Edith Green of Oregon, Mink co-authored Title IX of the Education Amendments of 1972 (S. 659), which barred sexual discrimination in institutions receiving federal funds and opened up opportunities for women in athletics.

This early advocate of graduate education for women was a former dean at Hunter College, New York. Born in 1905, she graduated Phi Beta Kappa from Hunter College in 1929. In 1931, she became one of the first women to finish New York University Law School with a J.D. She earned a Ph.D. in political science at Columbia University in 1939.

According to her 1997 obituary, Weintraub joined the Hunter faculty as an instructor after her graduation in 1929 and advanced to full professor in 1951. In 1956, she became dean of graduate studies in the arts and sciences, and she held the post until 1968.

An extraordinary educator, Bancroft (1854-1912) is considered the pioneer of special education. At the age of 25, she opened the first private boarding school in Haddonfield, New Jersey, for children with developmental delays. She and her fellow educators were hoping to develop innovate ways of teaching developmentally disabled children.

New Jersey Women’s History writes, “Bancroft created a specialized program for the physical, mental, and spiritual growth of each particular student. The founder valued the importance of proper nutrition, personal hygiene, exercise, daily prayers, sensory and artistic development, and lessons suited to mental age. Students were also treated to different forms of recreation, which included trips to the circus, theaters, museums, and concerts.”

This Rutgers dean led the fight for coeducation at the United States’ most prestigious universities. In 1958, she created a program to support a community of mature women at Rutgers University’s Douglass College. The Mary I. Bunting Program for Non-Traditional Students at Douglass is still in existence today. It offers a supportive home to women students at Rutgers who have been out of high school for five or more years.

In “Amazing Women In History,” KeriLynn Engel writes: “When Mary Bunting began her academic career in 1937, women like her had limited opportunities in a higher education world dominated by men. By the time she retired five decades later, many of the nation’s elite universities — including Harvard, Yale, Princeton and the service academies — had gone coeducational, due largely to Bunting’s transformative advocacy for women in higher education.”

Bunting was a research microbiologist by training. She taught at Bennington College, Goucher College, Yale, and Wellesley College early in her career, before leaving the full-time world of academia to raise four children. This gave her up-close insight into the unfairness of a higher-education system that hindered the professional progress of women who took time out for marriage and childearing.

According to KeriLynn Engel: “In the 1950s and ‘60s, Bunting emerged as one of the most prominent leaders of the movement to expand educational access for women of all ages and backgrounds — first as dean of Rutgers University’s Douglass College and later during her 12-year term as president of Radcliffe College, the undergraduate college for women at Harvard.

‘Time Magazine’ profiled her in a 1961 cover story featuring her signature lament, ‘Girls in college have scarcely begun to use their brains,’ and chronicling her determination to change that.”