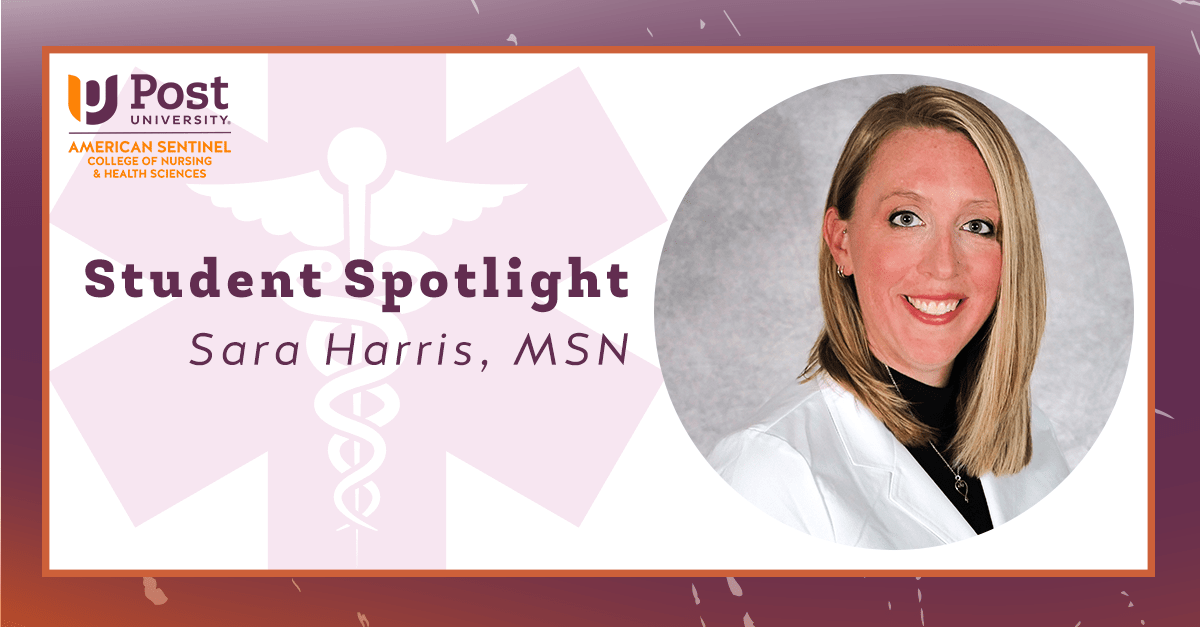 Although Sara Harris was reluctant to follow the same path as her mother into nursing, after a brief stint at Ohio Northern University majoring in public relations, she eventually came around. “I moved home and started working in restaurants and retail, but soon realized that helping people is truly what I want to do in life,” says Sara, who is originally from Ohio.

In 2005, Sara got a job working in a hospice care center and fell in love with the work. “I just really enjoyed the atmosphere and felt like there was so much more I could learn and do,” she says. She enrolled in an RN program at Kettering College of Medical Arts and graduated in 2007. In 2008, she started working in labor and delivery at Miami Valley Hospital on the maternity care floor.

Along the way, Sara decided to improve her skills with a BSN. She graduated from Indiana Wesleyan University in 2014, taking in-person classes at her hospital along with online classes. “I wanted to become a charge nurse and my hospital was a Magnet facility and encouraged us to get bachelor’s degrees,” Sara says.

The year 2015 brought a new adventure: Sara and her family moved to Florida. She joined the women’s unit at Lee Health’s Cape Coral Hospital. A few years later, Sara earned the MSN in Nursing Education from Grand Canyon University. “I wanted to be able to pursue teaching one day, but when a clinical educator position opened up at Lee Health, covering Cape Coral Hospital and Healthpark Medical Center, I went for it. It was about a year before I was set to graduate with the MSN.” Since 2019, Sara has worked in clinical education.

Inspired to Earn a DNP

It didn’t take but six months of moving into her new position for Sara to begin planning her next move: a Doctor of Nursing Practice. “In my role as a clinical educator, there’s always evidence-based practice and new technology to incorporate, and that really was the driving factor for continuing my education,” she says. She researched the difference between a DNP and a PhD and discovered American Sentinel’s DNP Educational Leadership. “I really loved the emphasis on practice experiences and that the program’s capstone let me select an educational intervention. I love that American Sentinel places so much value on nursing education as a practice itself.”

Enrolled in 2020 in the DNP Educational Leadership Program

Sara hopes to graduate from American Sentinel’s DNP Educational Leadership in 2023. So far, the experience is helping her in multiple ways. She accepted an adjunct faculty position at Florida Southwestern State College in August 2020. “I work in both the hospital and academic settings, so I can apply what I learn to either,” she says. “That’s my favorite part: the curriculum is applicable and interesting. I’ve really enjoyed it all.”

A New Job and Big Goals for the Future

Sara has just accepted a brand-new position with GE Healthcare, working with the labor and delivery team. She’ll be helping implement new technology that will improve maternal outcomes. One day, Sara hopes to move into academia. “The education and experiences American Sentinel have provided have helped me gain the skills, knowledge and confidence to dive into new and exciting opportunities,” she says. “As an adjunct instructor, I love interacting with students and then turning around and working with new nurses,” she says. “I think the fact that I work on both sides makes me better at what I do.”

The energy of nursing education makes her excited for the future. “I know this DNP degree will open up lots of doors,” she says. “I’m glad I took this leap because it has helped me discover a newfound passion: educating other nurses.”