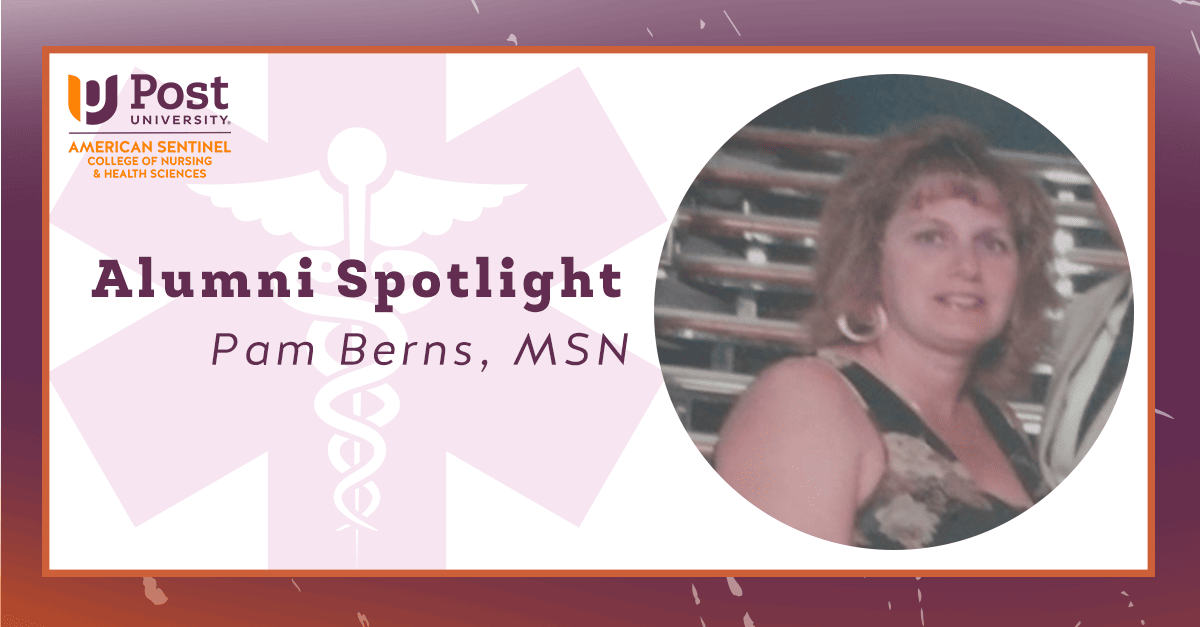 Pam Berns has been caring for people practically her whole life. Raised by her grandparents in a small town in Pennsylvania, she cared for her grandfather from the time she was a little girl.

“He was hemiplegic, which caused paralysis on one side of his body, so I would help him cut his food and things like that,” recalls Pam, who grew up in the coal region of Pennsylvania. Together, she and her grandfather would watch the TV show Emergency, and it rubbed off. “The character Dixie on the show was a nurse, and we would talk about nursing. He used to tell me to become a nurse too so I could care for others like him when I was older.”

Off to Nursing School

Pam’s grandparents passed away before she graduated high school, but her dream of becoming a nurse never waned. At the age of 17, she met her now husband, who—amazingly—shared her grandfather’s first and last name. “He’s the one who told me to pursue my dreams,” she says. She went off to Geisinger School of Nursing in her area and graduated as a Registered Nurse in 1991.

While in nursing school, Pam worked as an LPN, and once she graduated, she joined the cardiac intensive care unit at Geisinger Medical Center. She moved into a clinic staff nurse position at a family practice that was part of Geisinger.

A Move into Case Management

In 1994, Pam became a nurse case manager with Geisinger Health Plan. “I had that opportunity and I took it,” she says. “Geisinger is definitely an organization that encouraged learning.”

Pam took that to heart and returned to school in the early 2000s intending to get a BSN. But with two young sons, the timing wasn’t right to dive into such a program, so she pursued a bachelor’s degree in professional arts instead.

After many years in case management, Pam started thinking once again about returning to college for the BSN. “I had earned a certification in case management and I really wanted to broaden my horizons even more with further education,” she says. Pam was looking toward the future too, considering a move down the road to Florida to be near her oldest son. “I knew that having a BSN would open up options for me.”

A colleague at Geisinger recommended American Sentinel College of Nursing and Health Sciences to Pam and she liked the opportunity to complete a BSN and a bridge to continue on for an MSN Case Management. “Being a case manager is one of the most challenging yet rewarding roles a nurse can have,” she says. “I’d love to share what I’ve learned with future case managers and I think that in some sort of educational position I could be that person to teach LPNs and RNs all about quality case management.”

Pam started the BSN in 2018 and worked her way through the program, starting the MSN in 2020. She finished her last class for the MSN Case Management in fall 2021.

When Pam learned about an opening at Ascension as a nurse case manager, she knew it was her time to take on a new challenge. “I was finishing up my MSN and the timing was just perfect for me to do something new,” she says. Today, she is a team leader in the case management area and is helping train staff within the organization. “It’s exactly what I wanted. After 39 years, there were many tears leaving Geisinger, but I know this was meant to be.” In a year, Pam and her husband plan to move to Florida to be closer to her oldest son and enjoy warmer weather.

Now that she has the MSN credential and a new job, Pam says she has nothing but gratitude for American Sentinel. “It was one of the best experiences I’ve had professionally and personally,” she says. “I enjoyed every class and I learned so much, and all of it has been very applicable to what I do every day. I look forward to working with staff, members and colleagues and teaching them about the role and benefits of case management—that it is not just coordination of care but that it is about providing quality care.”

Pam says she knows that her beloved grandparents are ever-present in her career, even now. “I really do think they have a hand in everything that happens in my nursing career,” she says. “They inspire me still and are the ones that set me on this journey even if they didn’t know it then.”