Why Christmas Is the New July for Moviemakers and Moviegoers 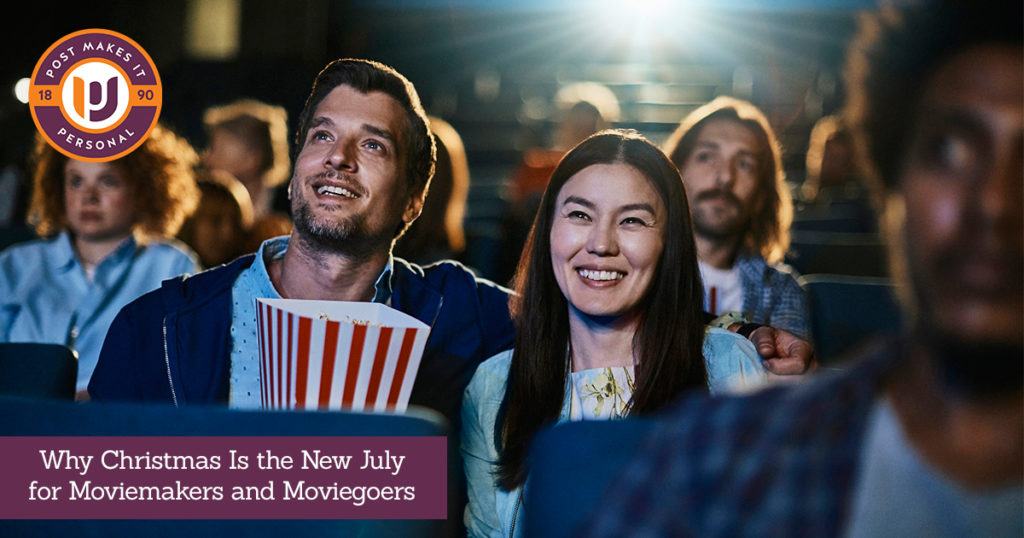 Over the years, the days leading up to December 25, as well as the day itself, have become a wildly popular time for American moviegoers to take in a flick. A 2015 piece for The Washington Post titled “When people around the world go to the movies most,” confirms in the first sentence: “Americans go on Christmas (Dec. 25), the Chinese on Chinese New Year (Feb. 19) and the French on Labor Day weekend (May 1).”

Moviegoers in the United States are so fond of seeing films over the winter holidays that this period has now surpassed summer in foot traffic and revenues. Major studios have increasingly started to release some of the biggest blockbusters and long-awaited sequels over the holiday season.

“It is no surprise that the film industry and movie ticket sales receive a boost around the holidays,” said Margaret DiMauro, Post University Program Chair of Communication and Media Studies. “Culturally, the holidays have always been a time marked by an increase in time for leisure and friends and family.”

You probably won’t be surprised by the highest December 25 movie grosses for the last three years:

Even though technological developments have made shooting a movie easier than ever before, “Hollywood has produced some of the most expensive films ever made over the last two decades,” reports USA Today. James Cameron’s 2009 “Avatar” still ranks as the most expensive move to make ever, with a production budget of $478,792,250. The 50th entry on the list, “Transformers: Age of Extinction,” had a production budget of $216,733,421—the second most expensive movie made in 2014. It also ended up making the most money that year. The studios are more eager than ever to recoup those investments by capitalizing on Christmas audiences.

“As a medium, film still tends to be one of the most immersive for an audience. When we sit in a movie theater, it is just as much about the experience as it is about the content,” said DiMauro.

“When we watch a film in the theater, we are asked to suspend our disbelief for two hours and allow ourselves to enter into whatever world is being portrayed on screen. The very nature of the environment in a theater allows us to shut off the outside world and enter the world of the film instead.”

“Lastly, consumers use media, like film, to fulfill their desire to connect with others. There is a sense of community about watching a film in a theater with others, even when they are strangers. So, the combined need to connect at a time that culturally is marked by friends and family, along with the immersive qualities of the medium of film make the holidays the perfect time to visit the theater!”

So, if your friends and family enjoy or need to get out of the house during the holidays, you’ve got plenty to look forward to this year. Keep your eyes open for the trailers as the studios get ready to blitz the eager public with high-dollar marketing campaigns.

Following are some of the most promising holiday releases.

“Mary Poppins Returns” — Opens Dec. 19. This musical fantasy directed by Rob Marshall stars Emily Blunt as the beloved magical nanny who returns 25 years later to help the Banks family deal with a tragedy. Meryl Streep, Angela Lansbury, Lin-Manuel Miranda, and Colin Firth have key roles. Acting icon Dick Van Dyke makes a welcome reappearance 54 years after the original in which he starred with Julie Andrews. This is going to be a family-friendly supercalifragilisticexpialidocious sequel.

“Spider-Man: Into the Spider-Verse” — Opens Dec. 14. In this animated movie, Spider-Man mentors a half-Puerto Rican, half-Black teenager from Brooklyn, N.Y. to become the next web-slinging superhero. Nicolas Cage provides the creepy voice for Spider-Man Noir. Shameik Moore does the Miles Morales / Spider-Man voice and Jake Johnson does the Peter Parker / Spider-Man voice. Listen for Lily Tomlin’s unmistakable voice in Aunt May.

“Robin Hood” — Opens Nov. 21. Taron Egerton plays the bow-and-arrow-wielding outlaw hero who steals from the rich and gives to the poor. Also starring Jamie Foxx, Ben Mendelsohn, and Jamie Dornan, this remake features plenty of battlefield and fight scenes along with the requisite amount of romance.

“Bumblebee” — Opens Dec. 21. This sci-fi action movie is a prequel to the live-action “Transformers” film franchise that began in 2007. Set in 1987, the film’s main character Charlie (played by Hailee Steinfeld) runs off to a junkyard in a small California beach town and discovers the battle-scarred and broken Bumblebee (the Transformer). Justin Theroux, Angela Bassett, and John Cena also star. This franchise has developed a very devoted following, so the theaters should be packed for this opening.

“Aquaman” — Opens Dec. 21. Jason Momoa (from “Game of Thrones”) is the main character in this DC Comics movie. He plays Arthur Curry, the half-Atlantean, half-human, who rules the underwater Atlantis. Amber Heard plays his love interest, Mera, and Nicole Kidman takes on the role of Aquaman’s mother, Queen Atlanna.

“Second Act” — Opens Dec. 14. The perfect Christmas date movie, this rom-com stars Jennifer Lopez as a 40-year-old big box store worker who gets a chance to reinvent her life. The empowering movie provides just the right amount of inspiration to help you set your New Year’s resolutions for 2019. Lopez’s character Maya creates a fake Facebook profile to land a high-profile career and shows Madison Avenue what street smarts can do. The movie also features Vanessa Hudgens, Milo Ventimiglia, and Leah Remini.

“Welcome to Marwen” — Opens Dec. 21. Mega-talented Steve Carell stars in this film based on a true story. He plays World War II illustrator Mark Hogancamp who loses his memory after being attacked by Nazis. While he recovers and grapples with PTSD, Carell’s character constructs a miniature world called Marwencol that’s full of the powerful women in his life. Look for appearances by Leslie Mann, Merritt Wever, Janelle Monáe, Eiza Gonzalez, and Gwendoline Christie.

“On the Basis of Sex” — Opens Dec. 25. This inspiring Christmas Day release stars Felicity Jones in the role of iconic Supreme Court Justice Ruth Bader Ginsburg, the second female ever appointed to the court. This year, the 85-year-old trailblazer marks 25 years on the bench. The biographical drama follows Ginsburg and her husband, Marty (Armie Hammer), during a groundbreaking case fighting against gender-based discrimination and seeking equal rights for women. Hopefully Justice Ginsburg is healed in time from her recent rib fracture to enjoy her movie’s public debut.

“Destroyer” — Opens Dec. 25. This dark, for-adults-only crime thriller stars Nicole Kidman as police detective Erin Bell who suffers a nervous breakdown after an undercover sting operation goes bad. Variety calls Kidman’s transformation akin to Charlize Theron’s in “Monster.” After referring to Kidman’s character as looking like “a roadie for the Rolling Stones” and “the sunburnt piece of beef jerky”—you have to believe it when Variety promises, “Nothing Nicole Kidman has done in her career can prepare you for ‘Destroyer.’”