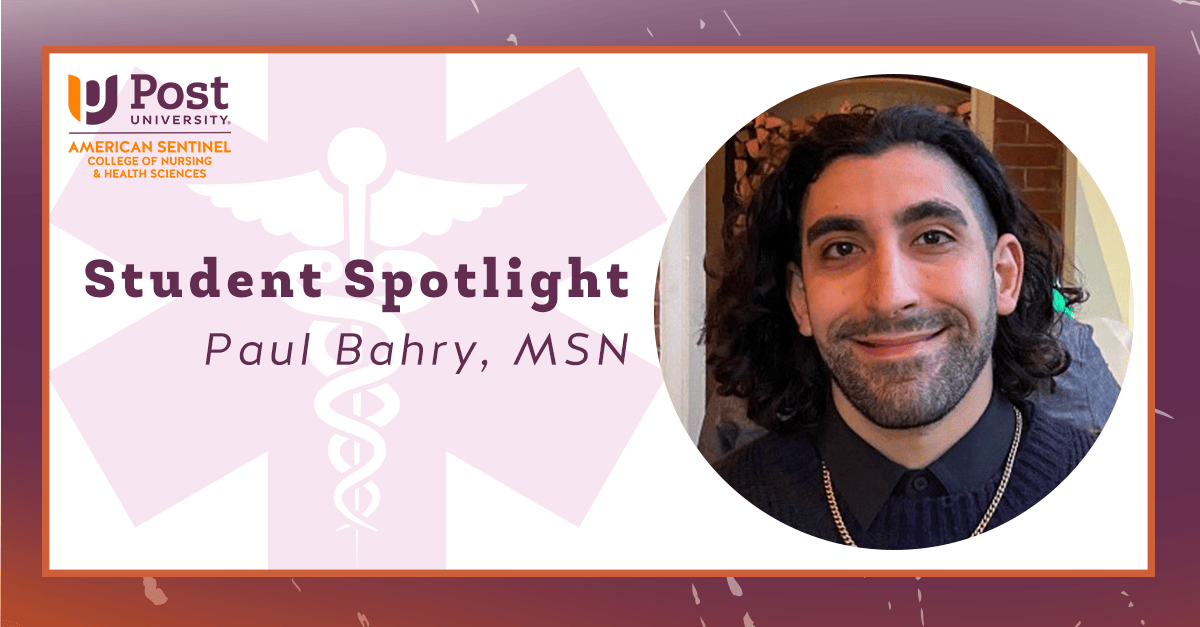 Paul Bahry started his college career with every intention of becoming a doctor. But in his third year in pre-medicine, the Detroit native had an epiphany. “The appeal of nursing was its flexibility, and I knew I could try different areas and learn different things throughout my entire career,” says Paul. “He transferred into Davenport University’s BSN program, and graduated in 2018.

A Start in Medical-Surgical

Paul started out at William Beaumont Hospital in Royal Oak, Michigan, where he worked in medical-surgical and telemetry. He worked his way up to charge nurse but in 2020, Paul was seeking a new challenge.

“Travel nursing was on my mind,” he says. “I had met my girlfriend, also a nurse, during my BSN program and it was something we started talking about doing together,” he says. When the coronavirus pandemic hit the U.S. in early 2020, Paul began making plans. “Nurses were in demand in so many places and it seem like an opportunity to get exposed to different research and grow my baseline of understanding.”

While researching travel nursing opportunities, Paul decided the time might be right to further his education too. His girlfriend, Angelique, was doing the same and the couple decided to take on the MSN journey together. After extensive research, they selected American Sentinel College of Nursing and Health Sciences at Post University. Paul began to pursue the MSN Nursing Education in August 2020.

Two Adventures Starting at Once

In fall 2020, Paul started the MSN Powered by SIMPath®. “I found the self-paced style very motivating and the simulations to be laid out very well,” he says. A few months later in January 2021, Paul accepted his first travel nursing assignment in Nashville, Tennessee. He joined HCA TriStar Skyline Medical Center as a cardiac medical-surgical nurse. “This program fit perfectly with my travel nurse plans too. Figuring out the formula for success took a little time and the expectations of the program are high, but it’s been great.”

Paul says that being an MSN student has enhanced his experience as a travel nurse. “I work in different facilities, and as an MSN student, I’m deepening my knowledge,” he says. “These two things build off each other and are helping me become a better nurse.”

Since July 2021, Paul has been working at Northwestern Memorial Hospital in Chicago. In December 2021, he officially completed the MSN Nursing Education. The experience has been so positive that he plans to earn the Doctor of Nursing Practice within the next few years.

A Future in Nurse Education

Eventually, Paul would love to return to Michigan and teach nurses. “I believe that a DNP would open doors for me,” he says. For today, he knows he will continue expanding his knowledge while doing travel nursing. “My approach has been understanding patterns of nursing practice that are constant, regardless of the setting I am in. So, in addition to the clinical knowledge I’m gaining, I am becoming very familiar with how nurses learn and thrive. And at American Sentinel, I became familiar with some excellent instructors. I am very happy where I’m at.”